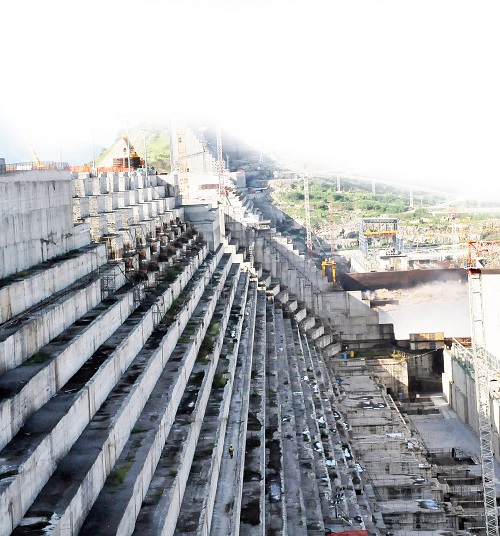 History teaches us that when change arrives, the best way to deal with it is not to resist, but to adapt

by Moges Zewdu Teshome
The Nile River, the longest river in the world, stretches across eleven countries. The Blue Nile, its largest tributary, originates from the Ethiopian highlands and flows all the way to Egypt until it enters the Mediterranean Sea. Herodotus, two and a half thousand years ago, claimed Egypt as ‘‘the gift of the Nile’’ because it depended on its water and the fertile soils washed from the Ethiopian highlands.

For Egyptians, this narrative is as true today as it was thousands of years ago—but Egyptians seemingly forget that the river originates elsewhere. They allow its symbolic value to surpass its economic value. Egypt considers any tampering with the Nile River as a matter of life and death. This explains the combative approach of the Egyptian government towards negotiations over ‘‘fair and equitable utilization’’ of the Nile River.

Upper riparian countries that contribute the entirety of the water that reaches the lower basin countries, Egypt and Sudan, made no effort to tame this trans-boundary river in the past.  It was not until 1999 that the nine-nation Nile Basin Initiative (NBI) was set up, launching a series of negotiations over fair and equitable utilization of the Nile River. This showed good progress and culminated in the Cooperative Framework Agreement (the Entebbe Agreement) signed by six out of ten riparian countries in 2010. Egypt refused to sign the agreement and froze its membership in the NBI, disagreeing with upper riparian states over ‘fair and equitable utilisation’. Playing a zero-sum game, it appeared only concerned about the relative gains of other riparian states.

The force of continuity: Egyptian mythology

In any discussion concerning the use of the Nile, Egypt has always boldly claimed historical rights over ‘its water’, including the right to veto any attempt to utilize the river by upstream countries. This claim results partly from a long-held mythology and partly from its erroneous interpretation of treaties and principles of international law. The myth, simply stated, is predicated on the civil law doctrine of res nullius, something belonging to no one or abandoned. The Nile River was adopted by the ancient Egyptians and now it exclusively belongs to Egypt. The underlying assumption was that it could be appropriated by one nation to the total exclusion of others. This is, of course, totally unfounded, and could in fact equally apply to upstream countries, allowing Ethiopia or others to tame the river, with due consideration of others’ rights.

Egypt dressed up its ‘exclusive rights’ with implausible legal arguments, revolving around claims of the binding nature of treaties on (non-involved) parties and the customary law principle of ‘not causing significant harm’. The first is the 1902 Agreement between Britain and Ethiopia on the delimitation of the frontier between Ethiopia and Sudan, though Britain has no more direct interest over the utilization of the Nile River. There has been a fundamental change of circumstances and the principle of state succession does not apply to decolonization.

The post-colonial states, in this case Egypt and Sudan, acquired a distinct and new legal personality. Even if an argument could be made that the treaty was still valid, article III only prohibits actions that ‘arrest’ or totally affect the flow of Nile River to downstream states. No upstream state has ever held such a position, which would be against the principle of causing ‘no significant harm’, a principle to which all upstream riparian countries fully subscribe.

In fact, the 1902 agreement has also been repealed by two subsequent treaties (the 1929 Treaty and the 1959 Treaty), between Egypt and Britain. The 1929 treaty gives Egypt the right to veto any future projects to be developed on the Nile River; the 1959 treaty apportions the water of the entire Nile River between Egypt, Sudan, and evaporation. Ethiopia is not a party to either of these treaties and is not bound by any of their stipulations. A treaty is binding only on the parties which signed it.

Egypt also contended that under customary international law, no state should cause significant harm to the interests (existing or future) of other states. Indeed, although it has yet to be properly defined, the ‘no significant harm’ principle has acquired a customary international law status. Equally, a state which claims that significant harm has been caused to its interests by other state(s) must show the actual existence of such harm. The International Court of Justice, for example, stated Nicaragua must prove the existence of trans-boundary harm, in its judgement on the case between Costa Rica vs. Nicaragua, in para.217.

Egypt has claimed the ‘no significant harm’ factor is relevant to aspects of the Grand Ethiopian Renaissance Dam (GERD), but this is essentially contrary to the Environmental Impact Assessment conducted by the Ethiopian government and the findings and recommendations of the International Panel of Experts. The project is in line with international standards and recommendations of the Panel of Experts.

The most specific claim of Egypt, and the main reason for the recent impasse in the tripartite discussions between Egypt, Ethiopia and Sudan, concerns the technical issues of prolongation of the filling period and guarantees over periods of drought. Every state has a sovereign right to use the resources within their territory and no form of diktat can affect this. The timing of the filling can only be reached through mutual cooperation, the result of negotiations carried out in good faith. Nothing more, nothing less.

Ethiopia is not constructing the dam for its aesthetic value; it is to bridge the gap between its ever-increasing need for power and the capacity of the state to provide it. Without provision of alternatives or payment of compensation, Egypt has no legal or moral capacity to demand an excessively prolonged period to fill the dam. As for periods of drought, no one can buy insurance policy for an Act of God. Neither Ethiopia nor Egypt has control over drought, but both have reciprocal obligations for sustainable utilization of available resources.

The force of change: #ITSMYDAM!

History teaches us that when real change arrives, the best way to deal with it is not to underestimate it or resist it, but to adapt one’s position through accommodative strategies. The world is full of compromises and excuses, give and take. The situation in Ethiopia has changed and for the better. The late Prime Minister of Ethiopia, Meles Zenawi, made it clear that Egypt should come to terms the changing circumstances and face the realities of the 21st century. No power can stop Ethiopia from unilaterally utilizing its natural resources. The changes came because the increasing population of Ethiopia, now close to 110 million people, calls for commensurate development to provide it with renewable energy. It is part of the moral and legal obligations incumbent upon the government to meet the needs of its population in the fight against poverty.

The Blue Nile is no more an orphan but a child of Ethiopia, previously neglected but now animating every citizen of Ethiopia. The NBI and the Entebbe Agreement have been the result of Ethiopia’s relentless diplomatic efforts, underlined by the national commitment to claim a fair share of the river, symbolized by the launching of the GERD in 2011. If there is anything that unifies the ruling party, opposition, and critics alike, it is the redeemed sense of justice visible in the GERD project.

Indeed, the GERD has as much symbolic as economic value. It is being built by the contributions made by all Ethiopians and as its very name underlines it is a national symbol of unity, justice and power, demonstrating Ethiopians welcome of the ‘return of their prodigal son’. The current diplomatic schism between Ethiopia and Egypt, caused by the failed negotiations, has reinvigorated the general public’s determination to support Ethiopia’s rightful claim over the Blue Nile in general and the unstoppability of the GERD project: ‘it is my Dam!’

The force of change is well supported by the international legal instruments as well. Ethiopia is not bound by outdated and irrelevant colonial treaties. Ethiopia is a sovereign state that has the right to put its natural resources to appropriate use. The only limitation under customary international law is the obligation not to cause significant trans-boundary harm—codified in Art. 2 of the Rio Declaration and upheld by international tribunals and courts here and here. Ethiopia, indeed, has firmly adhered to this principle throughout the negotiations.

The forces of continuity and change are not mutually exclusive. They can be reconciled if the parties negotiate on the basis of their own interests, rather than mythological positions, when heading to the negotiation table. Egypt must recognise that that Ethiopia provides the lion’s share of the water that reaches Egypt, that it is using a tiny percent of its own water, and that the circumstances have fundamentally changed in the upper riparian states. Ethiopia must not deny the reliance of Egypt on the Nile River and pledge to carry out the GERD project in a manner that does not cause any significant harm downstream. This would allow real negotiations on interests and genuine cooperation would be likely.

The problem has been that Egypt has not been negotiating on the basis of interest, but rather on pre-determined positions—a typical zero-sum game. Had Egypt accepted the basic facts, shown good faith, and been ready to give up its mythical claim of exclusive ownership of the Nile River, agreement on the technical matters, who gets what and when, could easily be reached. Egypt has no right to dictate to Ethiopia how to fill the GERD reservoir but it can negotiate an acceptable outcome, offering compensatory mechanisms or incentives where appropriate. Have these been proposed? It is impossible to provide guarantees against natural disasters like drought, but if parties cooperate in good faith, they can easily work on issues to mitigate any ensuring damage. These are questions that need to be answered, if negotiations are to proceed.

The disruption in the tripartite technical discussions, and Egypt’s refusal to negotiate, have raised concerns about conflict, though no one can afford a devastating war in the 21st century, least of all when the world is being devastated by a global pandemic. As Thucydides stated, ‘‘it is the rise of Athens and the fear that it instilled in Sparta that made the war inevitable.’’ There is no legal or scientific basis for Egypt’s ‘perceived fear’ of potentially significant harm posed by the GERD. Its claim for exclusive use of the Nile River proves nothing but the fact that ‘‘there is a sufficiency in the world for man’s need but not for man’s greed.’’ Above all, the forces of change cannot be contained or ignored. Egypt must understand that its fears are unjustified, and if it is to continue negotiations in good faith, it must stop running after outside powers or playing with ideology.

The Nile is a water resource located in Africa. The parties in dispute are members of the African Union. The solution should be African, not something dictated by the U.S. or arranged through the Arab League. The world has moved on and the solution must provide for sustainable use of the Nile water, in Egypt as in Ethiopia, a common and agreed response for a common problem.