Girmay out of Giro d'Italia after podium eye injury 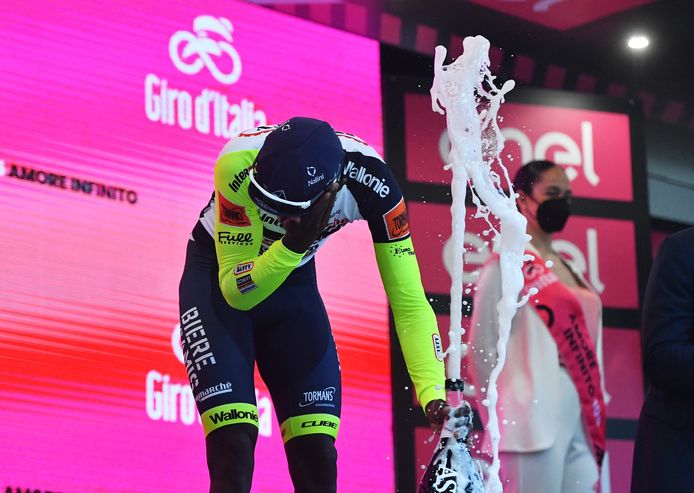 Biniam Girmay. © REUTERS Biniam Girmay was struck in the eye with a Champagne cork after winning stage 10 of the Giro d'Italia 2022

Biniam Girmay's celebrations on the podium after winning stage 10 of the Giro d'Italia have turned out to be race ending, with the Eritrean confirming on Wednesday morning that he won't be lining up for stage 11.

On Tuesday, Girmay was opening the traditional large bottle of sparkling wine during the podium ceremony when the cork flew out and hit his left eye. He was assessed by both team and race doctors about 15 minutes after the incident occurred and was then taken to hospital for additional medical checks.

Intermarché-Wanty-Gobert Matériaux later confirmed to RCS Sport that Girmay returned to the team hotel and was resting after his medical check, with a decision to be made in the morning on whether he would continue in the Giro.

"Today I didn't start the race because of my eye. I need some rest to give more power to the eye," Girmay said.

"Yesterday when I arrived after the hospital, at a bad moment, I enjoyed a bit with my teammates and staff and everyone. I'm also happy now. I was a bit sad about what happened with the champagne but when I came back in hotel they were super happy. They were a bit afraid, but when it looked ok, I really enjoyed it, I'm happy."

The decision takes the 22-year-old Girmay out of his first Grand Tour, but not before delivering his first stage victory and the first for a Black African rider ever. He leapt out of the lead group, taking on a long sprint on the uphill finish and then holding off Mathieu van der Poel (Alpecin-Fenix). It was a reverse of the one-two positions of stage 1.

Girmay had regularly been within range of the front through the first 10 stages of the Giro d'Italia, as after his second place on stage 1 he then delivered four top-five finishes before making it to the top step.

The stage win at the Giro d'Italia comes after Girmay delivered another watershed moment at Gent-Wevelgem, outsprinting Christophe Laporte (Jumbo Visma) to take out the cobbled classic. 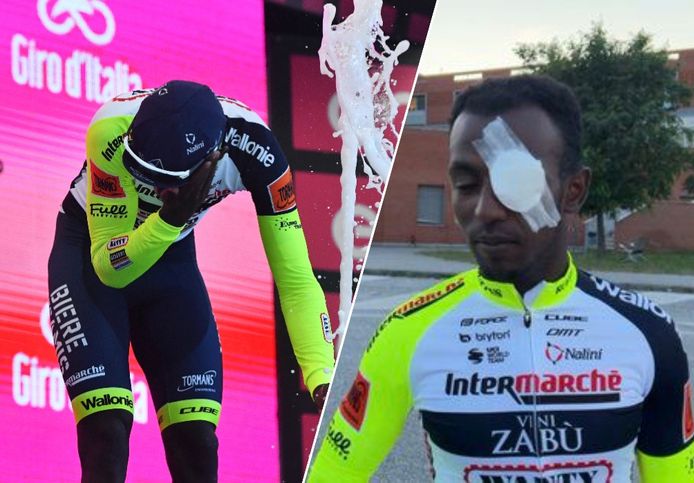 Girmay out of Giro d'Italia after podium eye injury | Cyclingnews

A message from Biniam Girmay
twitter.com/IntermarcheWG
Back to Dehai News