© Morgan Artyukhina
Large protests in more than 30 countries on Sunday demanded an end to US intervention in the conflict in Ethiopia, as well as misleading reporting on the conflict by Western media outlets, including the BBC and CNN.
The protests took place under the hashtagged slogan #NoMore, signifying an end to Africans’ tolerance of US meddling not just in Ethiopia and Eritrea, but the entire Horn of Africa region. According to Horn of Africa Hub, which helped initiate the hashtag as well as the protests, the protests spanned from London to Pretoria and from Washington, DC, to Tel Aviv, including in dozens of US cities.
In the US, the protests were supported by the Black Alliance for Peace and the Act Now to Stop War and End Racism (ANSWER) Coalition, two leading activist groups in the US anti-war movement.
Thousands rallied outside the White House and marched through the US capital, waving Ethiopian and Eritrean flags and carrying signs that criticized the US Agency for International Development (USAID) for weaponizing aid and suggested that if the US continued its intervention in Ethiopia, the country would meet the same fate as other nations like Libya, Afghanistan, and Syria.
The protests followed others held two weeks earlier
in conjunction with demonstrations in Addis Ababa.

‘You Are Reporting Fake News’

Another prevailing theme was repudiating what many called the “disinformation” about the conflict spread by major news outlets including CNN, the BBC, the Associated Press, and Reuters.
“CNN, you are reporting fake news on Ethiopia,” one sign read. “#NoMore spreading misinformation and insighting [sic] panic, fear and chaos,” read another.
Several rally-goers told a Sputnik correspondent at the Washington, DC, rally that the outlets had given readers false impressions about the conflict, including that the Ethiopian government had fired the first shot and not the Tigrayan People’s Liberation Front (TPLF) and that the Ethiopian army is on the verge of collapse, leaving the capital of Addis Ababa open to capture by the TPLF.
They also expressed their resentment that Prime Minister Abiy Ahmed, the country’s first democratically-elected leader and a recipient of the Nobel Peace Prize for making peace with Eritrea, was not being properly represented in the outlets’ reports.
Those attitudes are widespread back in Ethiopia, too. On Friday, the Ethiopian Media Authority published letters to CNN, BBC, Reuters and AP warning the news agencies “not to endanger Ethiopia’s national interest, territorial integrity, or the peaceful coexistence of the people of Ethiopia” with their news reports. “[I]n the absence of ethical and professional journalistic operation, the Authority would be compelled to revoke the license granted to your institution to operate in Ethiopia.”
Some of the objections the EMA noted include manufacturing and dissemination of false news and news analyses on Ethiopia to assist the TPLF’s objectives; reporting the law enforcement operation as a genocidal campaign; reports undermining the government’s efforts to address the humanitarian crisis in Tigray; reporting that the government is using famine and rape as weapons of war in Tigray; producing defamatory reports on the country’s leading institutions, and publishing news seeking to discredit Abiy in the international arena and put the country under intense diplomatic pressure.
Their fears are real: days earlier, the US Treasury announced sanctions against Eritrean defense and political figures and institutions, claiming their alliance with Abiy against the TPLF has “undermined the stability and integrity of the Ethiopian state." Earlier this month, the Biden administration also removed Ethiopia from the African Growth and Opportunity Act (AGOA), a US law that gives preferential trading privileges to certain African states, citing “gross violations of internationally recognized human rights.” 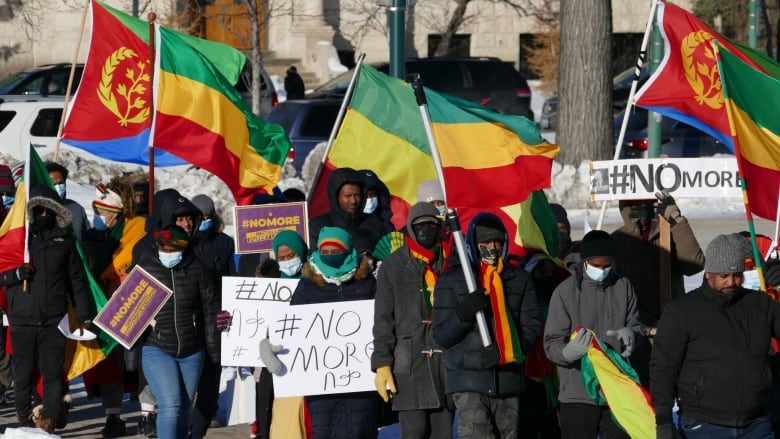 Hundreds of people took part in the protest on Sunday to raise awareness about the civil war in Ethiopia and to call on Canada to provide further supports to the government there. (Travis Golby/CBC)

The conflict began with Abiy’s election in 2018 as the replacement chairman of the Ethiopian People's Revolutionary Democratic Front (EPRDF) after the former leader of the TPLF, Hailemariam Desalegn, resigned amid mass protests. A coalition of ethnic parties from some of Ethiopia’s many ethnic groups, the EPRDF had been dominated for nearly three decades by the TPLF, but the other coalition members rebelled against TPLF rule and chose Abiy from the Oromo Democratic Party (ODP) instead. Ethiopian Prime Minister Abiy Ahmed
© AP Photo / Francisco Seco
After Abiy became prime minister, he began a series of reforms designed to undo the TPLF’s ethnic federation system, which gave it leverage over other Ethiopian states, including merging the EPRDF’s many parties into a single nationwide Prosperity Party. The TPLF rejected these changes, calling them illegal, and rejected postponement of August 2020 elections caused by the COVID-19 pandemic, deciding to hold its own elections in Tigray anyway, which the Ethiopian government called illegal.
The tense situation finally exploded in November 2020 when the TPLF launched an attack on Ethiopian National Defense Force bases inside of Tigray state, a northern province that borders Eritrea and Sudan. While the ENDF counteroffensive made early gains and captured the capital of Mekelle, the TPLF regrouped in the countryside. By July 2021, they had pushed the ENDF out of Tigray and launched new offensives into nearby Amhara and Afar states. Earlier this month, the TPLF claimed to be considering a march on the capital, but statements about its strength are believed to be overstated.
The conflict has created a massive humanitarian crisis. According to the United Nations, more than 70,000 people have fled across the border into neighboring Sudan and an estimated 4 million more internally displaced. There is no reliable death toll for the conflict.
On Monday, Abiy said he would be taking direct control
over the military’s effort, noting that “our enemies are attacking us on the outside and on the inside.”
"Starting tomorrow, I will mobilize to the front to lead the defense forces," Abiy said in the release. "Those who want to be among the Ethiopian children who will be hailed by history, rise up for your country today. Let's meet at the front."