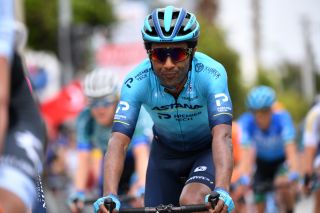 After three years at Astana, Merhawi Kudus is moving on in 2022, signing for EF Education-Nippo.

The Eritrean climber, now 27, believes he has potential still to be tapped, and is convinced Jonathan Vaughters' American squad is the place to do it.

"Here, I can achieve more, but I cannot do it alone," Kudus said. "With teamwork you can achieve more and go further than you imagine and I have always seen strong teamwork within EF. I believe in the team’s spirit."

Kudus, 27, came through the UCI's World Cycling Centre development set-up and rode as a stagiaire with the team now known as Arkéa-Samsic in 2013 before turning professional with South African team Qhubeka-NextHash - then known as MTN-Qhubeka - in 2014.
He went on to make history as part of the team's groundbreaking appearance as the first African trade team at the Tour de France in 2015, and spent five seasons there in total.
He moved to Astana in 2019, winning the Tour du Rwanda and placing third overall at the Tour of Turkey in his debut year before riding the Vuelta a España in 2020.
This season Kudus has placed fifth at the Tour of Turkey, eighth at the Route d'Occitanie, and second at Adriatica Ionica, as well as clinching the Eritrean time trial title.
"He’s a rider I was looking at for a long time and the pieces fell together. I'm really excited to have him on the team," said Vaughters.

"He really wanted to be on this team and that’s something that really means a lot to me when somebody says ‘this is the team I want to be at because I feel like you guys are the ones that are going to take me furthest in my career.’ That's music to my ears especially when I hear that from a guy like him because he’s had to break his way into cycling the tough way.

"I see him focused on mountain jerseys and stage wins. He can also do well in week-long stage races. And he’ll be great to help out guys that have GC ambitions. He’s a rider that can make that critical group of 20 to 30 riders in the mountains and be there to support."

Kudus himself has not indicated a preferred race programme for 2022, nor has the length of his contract been disclosed, but he's eyeing a return to the biggest race of all for the first time since that 2015 appearance.

"I want to support the team and also ride for myself, whatever that looks like," he said. "A stage victory in the Tour de France, that is the ultimate dream."