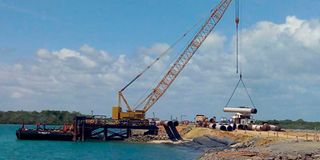 The ongoing Lapsset corridor project which is supposed to increase Kenya’s competitiveness and improve the global maritime trade.

The ongoing Lamu Port-South Sudan-Ethiopia Transport (Lapsset) corridor project that is billed to become East Africa’s light to economic growth is walking a tightrope. Kenya is the third-largest economy in Sub-Saharan Africa and the Horn of Africa’s top. But the ambitious Kenya Vision 2030 undertaking is likely to become a ghost project should Somalia extend its maritime boundary. The 1975-concieved Lapsset is meant to unlock Lamu Port and connect it to Addis Ababa and Juba through a railway network.

The project is supposed to increase Kenya’s competitiveness and improve the global maritime trade thanks to the big ports where the world’s ships will offload their cargo. Its blueprint includes construction of a port at Manda Bay, standard gauge railway line, robust road network, oil pipelines, three airports and an upgrade Lamu, Isiolo and the shores of Lake Turkana to resort cities.

Besides creating employment, Lapsset will also open up trade for landlocked countries like South Sudan, Uganda and the Republic of Congo. However, the over 64,000-square mile territory that is in dispute between Kenya and Somalia is its Waterloo.

The conflicting positions by the two countries arise from application of contrasting principles in determining the maritime border: It’s the straight line for Kenya and the equidistance delimitation for Somalia. But the latter is an overt enemy of pan-Africanism and progress because it could potentially lead to Kenya becoming a landlocked country.

Should the International Court of Justice (ICJ) rule in favour of Somalia, it will limit Kenya’s access to the high seas since its maritime border with Tanzania runs along a parallel of latitude that will become adjoined to the Somalia’ s diagonal maritime one. This will be more logistical than physical, stifling its regional and national economic interests.

Viewed through political, legal and security lenses, this dispute is Somalia’s joker in its card game to destabilise the Horn and, specifically Kenya. Any navigation by Kenya’s naval vessels beyond the country’s farthest waters will call for extensive communication between Kenya, Tanzania and Somalia, making maritime security and defence routines difficult, even in peacetime.

Mombasa port is linked to the Northern Economic Corridor (NEC) rail network that has always served landlocked countries in East and Central Africa. The two transport and logistics infrastructural networks are the region’s synovial joint with Kenya as the hub.

The Lapsset corridor is Africa’s golden egg and outgoing Somali President Mohamed Abdullahi Farmaajo seems to have sworn to kill the goose that lays it. This should be Kenyans’ eye opener to rally together and marshal political and civil goodwill in ensuring that both its land and maritime territorial integrity is upheld and guarded from hostile countries and people who have nothing to lose.

*Mr Kihoro is a research and data expert. ki-horog@yahoo.com.