Spiegel.de: Boom in Somaliland: A Miracle on the Horn of Africa

For our Global Societies project, reporters around the world will be writing about societal problems, sustainability and development in Asia, Africa, Latin America and Europe. The series will include features, analyses, photo essays, videos and podcasts looking behind the curtain of globalization. The project is generously funded by the Bill & Melinda Gates Foundation.

Pizzerias, burger joints and cafés with barista-made lattés are already well established here. You can even get Billy shelves from IKEA in Hargeisa, the capital of Somaliland, one of the world’s poorest countries.

In rural areas, large parts of the population are acutely threatened by hunger. There are few paved roads, the power grid is drastically inadequate and health care is practically non-existent. But compared to neighboring Somalia, the country has seen a huge boom.

Buildings are going up everywhere in Hargeisa. Large villas are being built on the outskirts of the city, while hotels, office towers and bank buildings are taking shape in the city center. Government spending is relatively clear and transparent, and there are regular democratic elections. So far, when the opposition has won, the transfer of power has been smooth.

Yet in the eyes of the world, this self-declared republic, with its around 3.5 million inhabitants, belongs to Somalia, a failed state on the Horn of Africa where pirates and terrorist militias have been wrestling for power for years with corrupt politicians and armed gangs. But while there is no end in sight to the civil war in Somalia, peace reigns in Somaliland. Whereas Somalia is failing to get back on its feet despite billions in international aid, Somaliland is home to more-or-less functioning tax system along with a police force and an army.

Edna Adan Ismail is an embodiment for what works differently, what works better here. The former foreign minister is not only the most important voice in the fight for Somaliland’s recognition as an independent state, the 83-year-old is also the best example of some of the things the small nation is doing right.

This is one of the key reasons for Somaliland's success, says Ahmed Dalal Farah, a business consultant and economics expert at the University of Hargeisa. He also had to flee because of the war and came back to help rebuild his land. He says the money and experience of the returnees is enormously important for the economy. But the key thing, he says, is that: "People believe in this country. That’s why they come back and it’s why they invest here.”

People like Mariam Adam Noor of Germany. The young physiotherapist from Münster found herself drawn to her parents’ homeland, and she has been offering fitness courses for women here for the past year. There has never been anything like it in Somaliland, she says. Indeed, the very idea of women exercising is revolutionary, she adds.

The returnees can be seen everywhere – in cafés, at concerts and in shops, recognizable by their expensive laptops, iPhones and smartwatches. Adam Noor says she enjoys the slower pace of life and the feeling of being at home. But sometimes, she says, she feels like she doesn't completely belong. Her two friends from London and Canada nod in agreement.

Somalia and Somaliland gained their independence almost simultaneously in 1960 - Somalia from Italy and Somaliland from Britain. But their plan to join together to form a union after independence proved to be a dreadful mistake. War ensued, and in 1991, Somaliland officially declared the union a failure, withdrew and was thus, in its citizen’s minds, independent again. But the republic has never received international recognition.

And that has left Somaliland largely cut off from international aid. What sounds like a curse, though, has actually appears to be a blessing. In a book they wrote on Somalia, German journalists Marc Engelhardt and Bettine Rühl write that international aid has actually helped to fuel the violence rather than bringing about an end to the conflict. Indeed, they write, aid goods have become one of the most important resources being fought over.

In Somaliland, on the other hand, the state has been left to its own devices from the very beginning and had to set up a tax system to finance itself. Taxpaying citizens can be more assertive toward the state, which strengthens democracy and reduces corruption. And in contrast to some developing nations, where almost all the tasks of the state – education, health and social services – are run by aid organizations, Somaliland has had to set up the relevant structures itself.

That is also the reason why former foreign minister Edna Adan Ismail didn’t retire after a long diplomatic life to a nice villa somewhere on the Mediterranean, like many of her former colleagues. "When I saw the destruction after the war, I knew my place was here,” she says.

She says the most important part of her life began after retirement. Within just a few years, she established a hospital on the site of an old trash dump that had served as an execution site during Siad Barre’s regime. Her goal is the reduction of infant and maternal mortality. When she realized that there weren't enough doctors to staff the clinic, she established a university next door where future doctors can be trained.

The hospital building is a delicate cream color that stands out from the dusty brown of the rest of the city. There are three floors and two hospital wings. And it was built for the most part without the support of the international aid agencies. Much of the money used to support it comes from private donors, most of whom are refugees living in the diaspora.

Edna Adan Ismail has put everything she has into the project. She sold her Mercedes and replaced it with a Toyota, which she then also sold a short time later and replaced it with an even cheaper Tata from India. She even gave up her house. Today, she lives in a small apartment on the first floor of the hospital with a kitchen, living room, bedroom and bathroom. Anything she doesn’t need to cover her basic needs flows into the hospital. 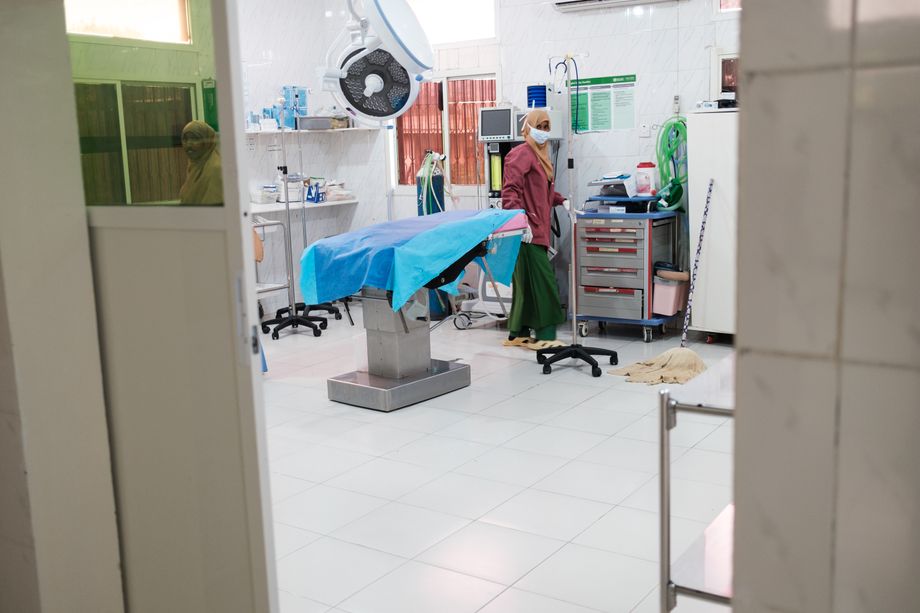 And the hospital has been quite a success. Since it opened in 2002, more than 27,000 deliveries have been performed. On top of that, hundreds of women have received training to become midwives, and the first graduates from the university are now working as doctors in the hospital.

Many people take a step back and live slower lives when they get older, but not Edna Adan Ismail. "I have to hurry because I don’t have that much time left,” she says.

She may be 83, but she still has plenty of plans, hoping to train another 1,000 midwives before it's her time to go. She's also in the process of setting up an agricultural school. She says her work has given many girls a future. Now, she wants to show young men how they can make a living by working with their hands.

This piece is part of the Global Societies series. The project runs for three years and is funded by the Bill & Melinda Gates Foundation.

The Global Societies series involves journalists reporting from Asia, Africa, Latin America and Europe about injustices in a globalized world, societal challenges and sustainable development. The features, analyses, photo essays, videos and podcasts, which originally appeared in DER SPIEGEL’s Foreign Desk section, will also appear in the Global Societies section of SPIEGEL International. The project is initially planned to run for three years and receives financial support from the Bill & Melinda Gates Foundation.