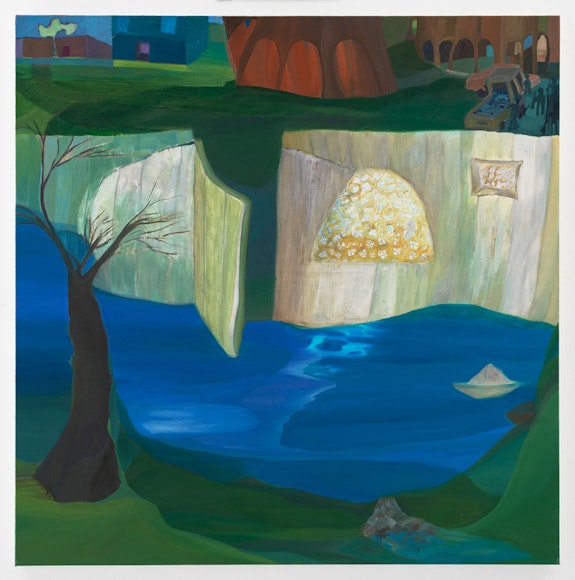 Ficre Ghebreyesus: Gate to the Blue

Gates, passageways, windows, frames: the paintings of Ficre Ghebreyesus are rife with portals, thresholds through which one is transported to reimagine notions of home and foreign lands, history and memory, self and other. That one could both hold such distinctions and recognize their interdependence was an essential truism for the accomplished painter, musician, and chef, whose clarity of vision and demonstrated skill for reinvention proved indispensable as he traversed borders and defied disciplines.

Born to a Coptic Christian family in 1962 in the Eritrean capital of Asmara, Ghebreyesus’s birth was ushered in by the nation’s war for independence from Ethiopia, a protracted struggle that would last for three decades. At the urging of his mother, Ghebreyesus left home at the age of 16, embarking on a journey that would lead him through Sudan, Italy, and Germany before arriving as a refugee to the United States in 1981, where he settled in New Haven, Connecticut. Shunted across nations, continents, and seas by the ravages of war and the inequities that underpin globalization, Ghebreyesus articulated in music, food, and perhaps most poignantly, in painting, that retaining one’s heritage need not come at the expense of drawing wider connections across histories of colonialism and violence. 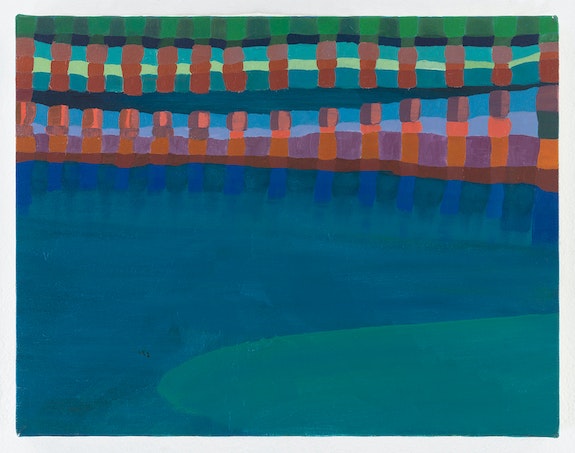 On view in the artist’s first New York exhibition is a selection of paintings made from 2002 until his death from a heart attack in 2012, all elucidating how the self is a composite fiction negotiated within the swirl of time, space, and memory. A suite of small acrylic paintings, including the eponymous Gate to the Blue (2002–07), Boat at Night (2002–07) and Tis Time to Seek Asylum (2007–11), each set within a blond wooden frame, not only introduce the subject of forced migration that proliferates throughout Ghebreyesus’s work, but also enlighten the viewer on the artist’s exquisite treatment of color. In each of these paintings, Ghebreyesus blends shades of aqua, turquoise, and cerulean in signature combinations, evoking the shimmering, shifting qualities of water to virtuosic effect. Here, the portals depicted are obstacles on a journey toward freedom—the administrative hurdles of seeking asylum, the vessels used to escape.

Ghebreyesus developed a visual lexicon through which to convey the difficulty of real and imagined journeys to freedom, relying on recurring motifs such as boats, to join together personal experience and traumatic histories. In Red Hats and Balloons (2002–07), the three faceless figures in red hats that traverse murky waters, rendered in washes of gray and seafoam acrylic paint, seem to occupy a similar surrealistic setting as the large figure who dominates the composition of Nkisi (2011). Nkisi references a set of West-Central African spiritual practices that were then carried on by the enslaved Africans who were transported across the Atlantic during the Middle Passage, represented by the large figure, who wears a barely-visible blue necklace with a small cross, nodding to Coptic Christianity. The figure dominates the composition and looms protectively over the smaller, humanoid figures that appear to be pinned by bent nails below it. As in other paintings, including Middle Passage Figures with Solitary Boats (2002–07) and La Amistad (2007), the legacy of slavery and its violent separations of families and generations is redolent in Nkisi, a conscious gesture that declares the artist’s insistence on yoking the brutal realities of the past to fictive scenes that confer upon the present an aching urgency. In the facture of Nkisi, with its mélange of olive and brown acrylic washes, its compositional register with three discrete horizontal sections, and its variations of light washes and a patterned design inscribed onto thick impasto, Ghebreyesus facilely melds iconography, spirituality, and history into a cohesive, unified whole. 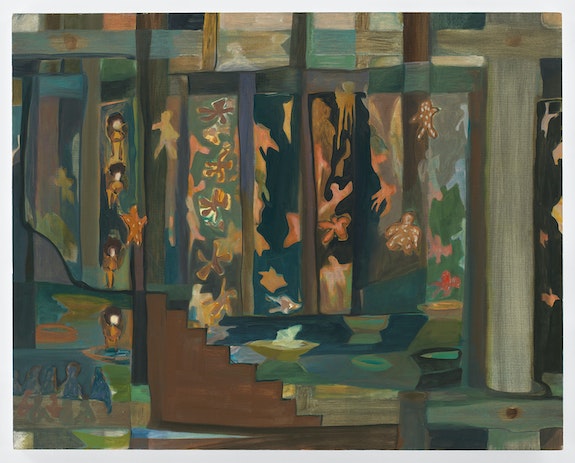 Ficre Ghebreyesus, Middle Passage Figures with Solitary Boats, c.2002-07. Acrylic on canvas, 24 x 30 inches. © The Estate of Ficre Ghebreyesus. Courtesy Galerie Lelong & Co., New York.
Several paintings allude, both directly and indirectly, to the artist’s biographical details, the fractured components of a life punctuated by displacement. A series of horizontal canvases that depict stylized figures that draw heavily from Coptic imagery, Angel and Musician (2011) and Seated Musician with Feathered Wing (2011) are split into diptychs, and each feature traditional Eritrean musical instruments that Ghebreyesus himself played. In Mangia Libro (2007), whose title gestures to linguistic and cultural residua of Italy’s occupation of Eritrea and whose composition is reminiscent of paintings by Bhupen Khakhar, the artist produces a self-portrait of childhood and his voracious appetite for education that was cut short by war. In the center of Untitled (2002–07) stands a singular, naked male figure, surrounded by swirls of pale color that envelop him in a kind of mandorla. Inscribed along its edges are phrases that seem like notes the artist made to himself (“Extend by this much of a golden section”) as well as a set of instructions for how to read the painting, clockwise, to spell SELF. 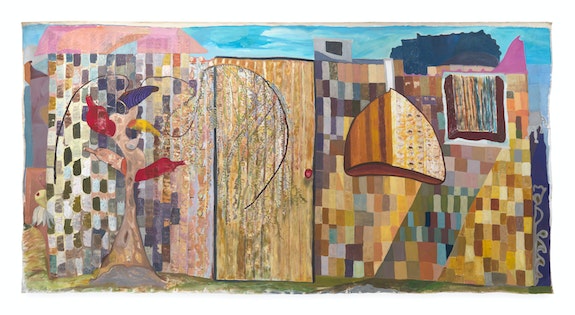 Central among the works in Gates to the Blue is a massive, unstretched canvas titled Zememesh Berhe’s Magic Garden (2002), after the artist’s mother. As the poet and President of the Mellon Foundation Elizabeth Alexander, Ghebreyesus’s widow, noted in a talk with composer Jason Moran, Ghebreyesus’s studio in New Haven was often strewn with stretched and unstretched canvases in varying states of progress, and the exhibition’s design mirrors this layout.1 Comprising fields of shimmering, vertiginous designs that mimic the “strategic essentialism” of pan-African textiles, with inscriptions of flowers laden in the stacked fields of colorful tiles, the painting establishes a scene grounded in reality with fantastical elements.2 The left side of the composition also features a tree laden with colorful glass bottles, an apotropaic tradition that can be seen both in Africa and in the American Southern coastal diaspora, demonstrating Ghebreyesus’s engagement with the politics of cross-cultural Black solidarity. At its center is a massive door, covered in delicate vines. The realms of possibility that lay behind this door—a door that protects the compound, a door that withholds and invites, a door built from personal memory and heavy with the weight of history—are what make Ghebreyesus’s work so arresting.

Tausif Noor is a writer based outside of New York.

Ficre Ghebreyesus: Gate to the Blue – The Brooklyn Rail