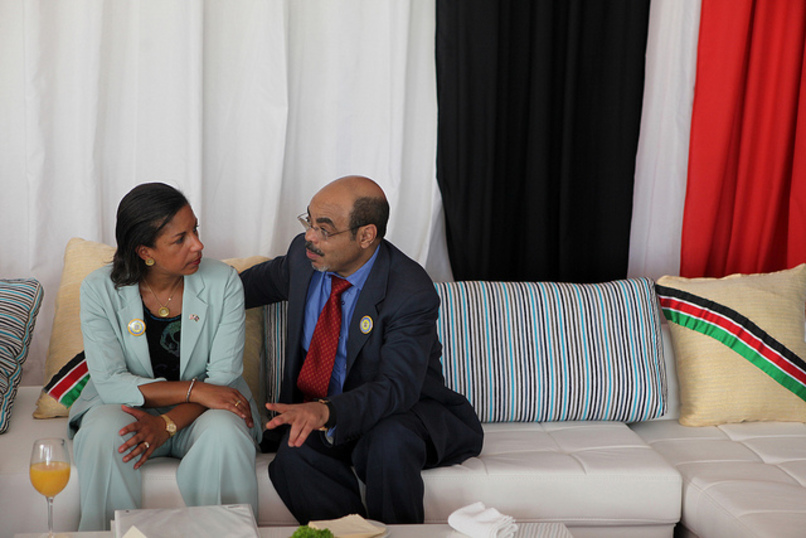 Susan Rice with her close friend, the late Meles Zenawi

By Kibreab Tesfay |
July 23, 2020
Writing for a local US Newspaper (Orange Country Register), Professor Tom Campell crows on Susan Rice’s presumed “talents and virtues that are disappointingly rare in US diplomacy today”. The author proceeds to shower gratuitous plaudits on Rice for her laudable “initiative and role” to end the “Eritrea-Ethiopia border war.
Granted, this is election year in the US which translates into characteristic hyperbole and media hype by campaign handlers of potential candidates to high office. But even with these extenuating circumstances and the Professor’s palpable zeal to bolster Rice’s bid for the post of VP in the Biden Presidential ticket, the narrative is patently false and utterly irresponsible.
First off, Susan Rice was not “driven” by diplomatic foresight, wisdom and courage or by empathy for the peoples of the Horn of Africa, to “nudge the US Government” to launch a peace initiative to prevent a looming Eritrea-Ethiopia border conflict. Rice first came into the scene during the early days of the border war in May 1998 as an appointed envoy.
Indeed, the US and Rwanda became involved in the facilitation process on the initiative and express request of Eritrea.
Eritrea’s persistent efforts to contain TPLF’s strident territorial ambitions and illicit acts of surreptitious encroachment on sovereign Eritrean lands through bilateral frameworks were to no avail. Hand-written amicable letters that President Isaias sent to Ethiopia’s Prime Minister when TPLF troops set camp in the Eritrean small town of Adi Murug in August 1997; various meetings of the Bilateral Boundary Committee that was subsequently established on Eritrea’s insistence did not bear any fruit. The TPLF went further to declare war against Eritrea in the first weeks of May 1998 using a minor skirmish that it provoked in the Badme area as a pretext. In the circumstances, Eritrea solicited the facilitation of two friendly countries – the US & Rwanda - to prevent the outbreak of a potential and costly war between the two neighbours.
But what Rice and her superiors who continued to be involved in the facilitation process for the next two years, had in mind was a complex geopolitical game that had nothing to do with sincere efforts of conflict resolution. This is amply illustrated by the following sequence of events:


These are the indelible facts.
As indicated above, Susan Rice was not acting alone. In most instances, she was not the principal player; accountable as she was to Madeline Albright in the first stint and working directly under the supervision of Anthony Lake in the subsequent episodes. Furthermore, the Bush Administration followed suit when the TPLF regime rejected the EEBC “final and binding” Arbitral Award in contravention of the Algiers Agreement that the Facilitators had brokered with explicit provisions of punitive action by the UNSC against the guilty party under Article VII of the UN Charter.
In this perspective, the blame for the debacle cannot be pinned down to diplomatic misdemeanor, temperament or other fault lines of Susan Rice alone. The compelling evidence points to deliberate, bi-partisan, US policy that stemmed from its geopolitical calculus and perceived interests in those crucial years. Still, these considerations cannot absolve Susan Rice from personal and collective culpability.
Back to Dehai News