CecafaSeniorChallengeCup: Eritrea have bundled Harambee Stars out of this year's CECAFA competition.

Kenya vs Eritrea: Harambee Stars suffer 4-1 defeat to bow out of CECAFA 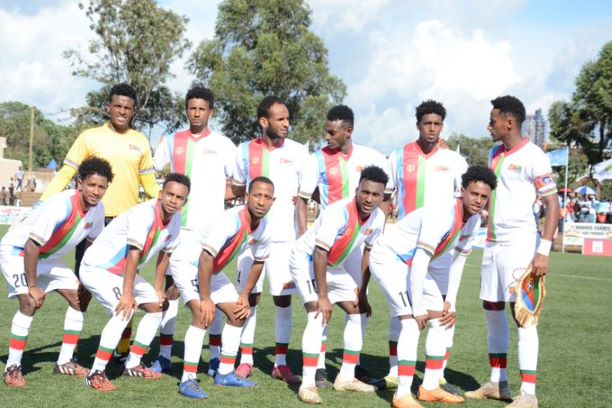 by  Fred Kennedy Dec.17 2019
Kenya's dreams of retaining the CECAFA Senior Challenge title have been crashed after suffering a 4-1 humiliating defeat in the hands of lowly-ranked Eritrea.
The Tuesday afternoon, December 17, clash played at Lugogo Stadium in Kampala was the only hurdle standing between Stars and a place in the finals.
Francis Kimanzi's men had a bright start to the campaign, winning all their group matches against Tanzania, Sudan, and Zanzibar to book a date with Eritrea in the semis.
However, Eritrea were undeterred with Stars' spotless form, staging a buoyant performance that eventually eliminated Kenya from the regional showpiece.
The Eastern African nation took an early lead in the 18th minute of the clash, thanks to Oscar Wamalwa's own goal.
Aware of his opponents' threat, Kimanzi was forced into a first half change, bringing on Isuza Whyvone in Roy Okal's place.
But the tactical change did not pay off, as the two sides heading into the break with Eritrea leading.
Upon the resumption of the second half, Eritrea continued with their offensiveness, and their efforts paid off in the 49th minute as they doubled their advantage through Abel Solomon Okbay.
Stars would however pull one back five minutes later through Wamalwa, who made amends to his first half blunder that handed Eritrea the lead.
Michael Habte Gebremesqel went on to restore Eritrea's two-goal advantage in the 66th minute, before Robel Kidane putting the game beyond Stars nine minutes later.
Eritrea will now face off with the winner between Uganda vs Tanzania in the finals of the competition.
Read more: .tuko.co.ke

Futaa-
Back to Dehai News