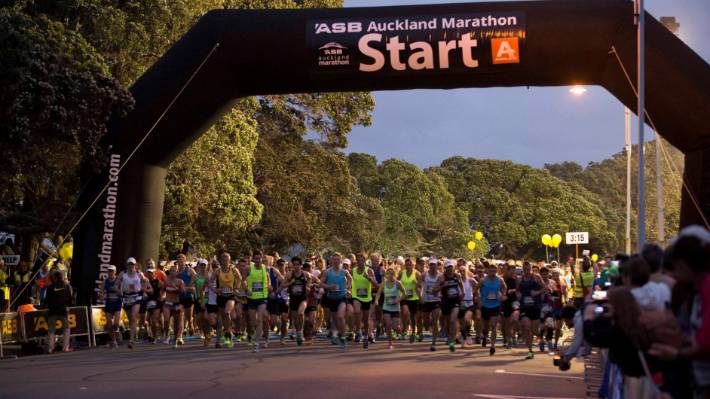 SUPPLIED
Isaias Beyn took home the gold medal in the 42km marathon with a time of 02:19:33

Redemption for Eritrean Refugee with Victory at ASB Auckland Marathon

It was redemption for Eritrean born Aussie Isaias Beyn in taking out the ASB Auckland Marathon today, learning from his mistakes last year to blast away over the final 10km to defeat a gallant Michael Voss (Rotorua) and Nicholas Sunseri (Queenstown) and post an impressive 2:19:33 on the tough course that takes in the Auckland Harbour Bridge.

The diminutive Beyn was caught out by the hills when starting favourite last year and faded to finish third, but showed he is a quick learner as he left plenty in the tank for the final 10km after earlier dueling with Voss for the majority of the distance.

“The first half marathon was easy, running at 3:20 pace and after that I pushed hard, I ran at 3:15 and then 3-minute pace at the end. It was good, I am happy today. I learned from last year when it was very hard and the hills I ran too fast and was very tired and my legs were bad.

But this year I am happy have had good training and good preparation for this race with the Sydney marathon and then Gold Coast half marathon in 1:14, this year the challenge was to put the result together with the time and I am very happy, thank you very much.”

Beyn was patient over the first half, making his first move at the top of the bridge, picking up the pace on the downward side into the city, dropping Sunseri and putting Voss under immense pressure.

Voss ran in some three minutes behind Beyn, exhausted at having emptied the tank to run a personal best by nearly five minutes.

“That was a great race, I just looked to stay with Isaias for as long as I could, but in the end I had nothing left to respond, he ran a superb race, but I am delighted.”

Third home was Sunseri, who initially kept pace with Voss and Beyn until he backed off when Beyn made his move off the Harbour Bridge.

In the women’s race it was a journey into the unknown for Hannah Wells (Tauranga), with the 70.3 triathlete debuting over the distance but doing enough to hold off the irrepressible Mel Aitken (Wellington) and sixth-year med student Sonya Cameron (Dunedin).

Wells ran conservatively knowing that today was going to be new territory for her legs.

“It is a long way, I got to 35k and I was warned before the race that this is where it would really start, and it hurt from there on. It is definitely harder on your legs, you can feel the fatigue towards the end there, your hips, knees everything starts to ache, and you definitely feel it in your legs.

“Mel is really well known in the long-distance running world and smashed the Ultra just last weekend, so kudos to her as well for a really impressive run.

“There was a lot of support out there, even from the other runners which was pretty cool, I am just sorry I didn’t have the energy to shout much back their way but it was nice to hear it, especially coming back on the final loop on the waterfront.”

Aitken was all smiles as she lightly tapped her way over the line just one two and a half minutes back, as she showed no ill effects of last weekend’s win in the New Zealand and Oceania Ultra Running Championship in Taupo, while Cameron backed up her wins in Wellington and Dunedin with third today.

The Barfoot & Thompson Half Marathon men’s race was tipped as one to watch today, with a host of contenders all within a couple of minutes in regards their personal bests. But it was perhaps a surprise packet in Oli Chignell (Dunedin) who took out the honours, sprinting past Cameron Graves (Auckland) just before the final turn on to the grass and the finish straight at Victoria Park.

“I am a wee bit inexperienced over he half marathon so I thought it would be good to hold back and I didn’t know how I would go today so I left it until the last wee bit when I was feeling good. But credit to Cam, he took the bull by the horns and I think we both went under the race record today.

“It was perfect when I woke up this morning, about 13 degrees, overcast and we even had a light shower about halfway which was nice and cooling. It really was a great day for it.”

Chignell loved the camaraderie out on course, especially over the landmark Harbour Bridge.

“I did have a little look at the view as we went over the bridge, it was nice running amongst some of the marathon back markers, their support was awesome. But the bridge was a bit of a ball-buster, it is hard to chuck in there near the end of the race!”

Chignell did indeed break the course record previously held by Matt Smith (2009) by 29 seconds but perhaps just as impressively beat his previous best over the distance by a whopping five minutes and 33 seconds.

The women’s Barfoot & Thompson Half Marathon was dominated by Lisa Cross. Only deciding to step down to the shorter distance in the days leading into the event, Cross loved everything about the day and her race execution.

“That was beautiful conditions, it was warm but no sun out, it was perfect. I have raced it several times now, it is not a fast course, it is challenging with a few hills, but rewarding and I enjoyed it. There are some super supporters out on course that keep you going, it was a good day.”

The wheelchair category produced some world class racing, with Australian Michael Taylor smashing the previous race record in the handcycle division, ironically held by his host for this weekend in Brendan Stratton, who couldn’t race due to injury.

Taylor was in a class of his own as he powered his way around the course in a stunning 1:21:58.

“I am pretty good, that was a good ride, great conditions. The course was good, a tough first half and I didn’t like the bridge very much. It wasn’t as bad as I thought it was going to be, it was hard negotiating the first 10k I guess, but once the course opened up it flowed really well, and the conditions were great.

“It is a great way to start the event and push it forwards. Now that we have done it we need to get more athletes involved and promote it, it seems word of mouth is the way to grow it, it takes time, but honestly it was a really good course, I enjoyed it.”

First home in the women’s handcycle was Hamilton’s Tiffiney Perry, she too was all smiles as she crossed the line in 1:50:07.

In the push rim category, the men’s race was taken out by New Zealand para-sport legend Dan Buckingham, the former Wheel Black dominated to win in ??,

Natasha Price made the trip from Australia and it was well worth the journey as she took out the women’s Push Rim category in 2:51:50.

“I have had a fantastic day, it is an epic course, hard work but gee it was good fun and I really enjoyed it. The Harbour Bridge I was expecting to be a lot more difficult than it was, but it was not too bad at all,” said the English born Aussie.

“Usually on a hill like that you can get up to 50 or 50 k’s an hour, but given I am only just coming back from injury after coming out of my chair coming downhill I took it very conservatively, I was only going maybe 25 or 30k, it may have cost me minutes but at least I made it to the end of the course.”

Price did have some pre-race drama as she sought out a lead rider to assist given her sight impairment, with local man Paul Wilson answering the call in what he described as ‘a cool way to celebrate his birthday’.

“Paul is a good guy, he did such a great job, I am so pleased with how that went, considering he hasn’t done lead cycling for an event like this before, especially for someone with a vision impairment, I was really impressed and will definitely get him to ride for me again next year.”

Those near perfect conditions greeted 15,000 participants in the ASB Auckland Marathon today, with a cool and calm day giving way to a beautiful spring day under blue skies as finishers enjoyed the post-race party at Victoria Park.

Race Director Adam McDonald was delighted with the day.

“This was Auckland on show at her best, with thousands of people enjoying the day, the city and for those in the John West Traverse, Barfoot & Thompson Half Marathon and ASB Marathon the chance to run over the iconic Harbour Bridge and take in the views.

“The weather couldn’t have been better, with cool conditions this morning giving way to a perfect warm spring day. Everyone involved has helped deliver an incredible day, but in particular I want to shout out to our Ryman Healthcare volunteers, traffic marshals and medical teams for ensuring everyone’s safety and helping create a memorable day for so many people.”

The final money raised in the ASB Charity Hero Programme will be known in the days ahead once all fundraising is totaled up.