News.SKY.com: Protesters 'prepare for battle' after talks break down in Khartoum

The suspension of the negotiations between protesters and the military council has changed the whole dynamic in the protest zone. 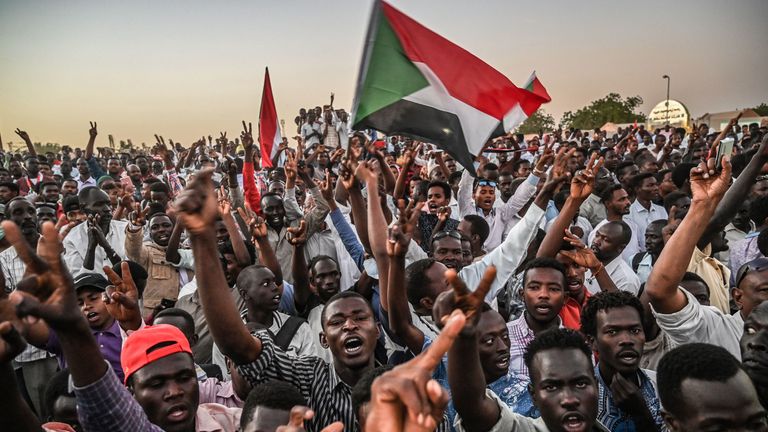 Image: The songs of the past few days have been replaced by steely determination

Demonstrators in Sudan have staged massive protests demanding that the military hands power to civilians.

It comes after former president Omar al Bashir was ousted, with the military council taking over.

What a difference a day can make.

From rock festival party to potential rock throwing confrontation, in the blink of an eye.

The Sudanese revolution got its anger back and the "kids" are preparing for battle. The military council isn't listening and they are determined to make it hear - just as they have done for the past 120 days of defiance.

Even as we walked to the protest site, through the barricades they refuse to take down, past the checkpoint volunteers searching everyone's bags, towards the various speakers addressing small and large groups of demonstrators, you could feel the difference. There is a steely determination, there's an anger in their chanting. It has replaced the joyous uplifting song of celebration that made us smile hour after hour, day after day. Stuart Ramsay

There is a defiance and an anger in the air. Make no mistake: everyone is absolutely lovely to us, but they aren't smiling like they have been for the last week. There is a steely determination, there's an anger in their chanting. It has replaced the joyous uplifting song of celebration that made us smile hour after hour, day after day.

The breakdown in talks between the protesters' negotiating teams and the military council has come as a reminder to the thousands of people involved, that the road to this revolution, already pockmarked with the deaths of so many, still stretches into the distance.

The sense of unease is not helped by the ever present sight of very heavily-armed militia fighters. They are everywhere. Every road, every roundabout, every junction and every bridge across the Nile is controlled by uniformed men carrying machine guns, on trucks with 50 calibre machine guns and carrying more rocket propelled grenade launchers than I have ever seen in one place at one time - and, trust me I have seen a lot. 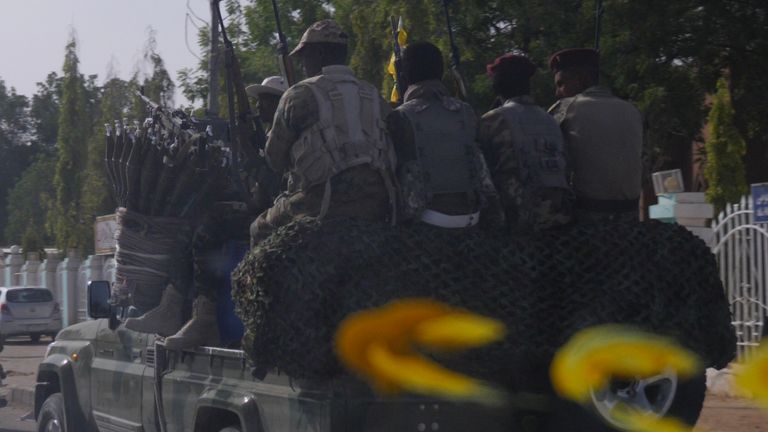 This is not the regular army. They are the so-called Rapid Support Forces, the RSF. It's an acronym synonymous with brutality and fear. They are a militia created by the now deposed dictator Omar al Bashir. Once his own private army, they are the force that effectively carried out the coup against him.

Now they say they are protecting the revolution and the protesters. They surround the protest site. In truth nobody really trusts them, but for now they are there and there isn't really much anyone could do about it even if they wanted to.

An order from the military council for the barricades to be dismantled and the roads to be opened, was obviously ignored. But the effect has been to cloak the camp in an atmosphere of nervousness and paranoia. Image: Protesters in Khartoum are determined to be heard by the military council

Social media posts warn of phantom camp clearance operations sending shivers through the crowds as they brace for non-existent trouble.

A shout and a sudden movement of people can turn into a furious stampede as people run to help. In one instance a poor soul had fallen into a canal of sewage, hundreds ran forward, only a few gingerly helped him out.

The suspension of the negotiations has changed the whole dynamic in the protest zone.

What feels like a world away, but is still within the protest zone, is the campus of the University of Khartoum.

Built by Lord Kitchener in 1902 as a memorial to General Gordon of Khartoum, it is a beautiful - if slightly dilapidated - haven of cool cloistered walkways and classrooms; it's also home to the so-called "godfather of the revolution", Professor Muhammad Yousif.

We spoke for an hour, the drums, trumpets and roars of the protesters ever present in the distance. 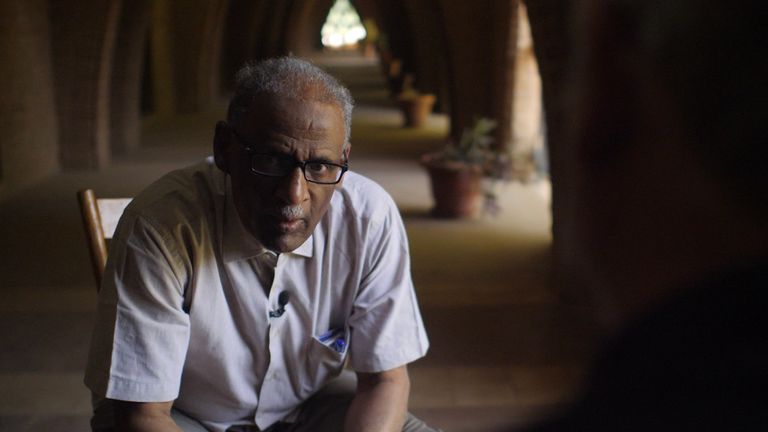 Image: Professor Muhammad Yousif is described as the godfather of the revolution

He firmly believes that some members of the military council are determined to undermine the revolutionary process at all costs and are imposing problems on the negotiating process in an attempt to ensure that the old regime survives in some form.

"In fact, we are calling for change, they are calling for perpetuation of the old regime and if they can, to reproduce it with all of its characteristic features. That is a basic difference between us and them."

He told me that the military council had decided almost immediately to say that they could not hand over power because there were too many differences between the opposition groups. He says that there have been two incidents of major differences but that they were overcome, and that the opposition remain united. 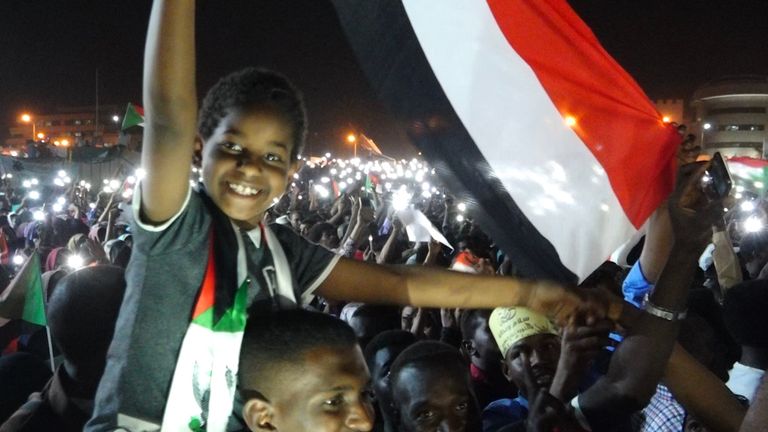 The professor said that talks would resume, implying that the current break down was more about manoeuvring. He said that they decided to go back to "Square One" to send a clear message to the military that they were not prepared to compromise.

"That is why we are exerting this kind of pressure, for them to go away," he said.

I asked him if the positioning of the opposition could lead to the loss of more lives.

The most optimistic here really do hope that the talks breakdown is more about manoeuvring than confrontation.

Out in the crowds they aren't so sure. But one thing is for certain: they aren't going anywhere.