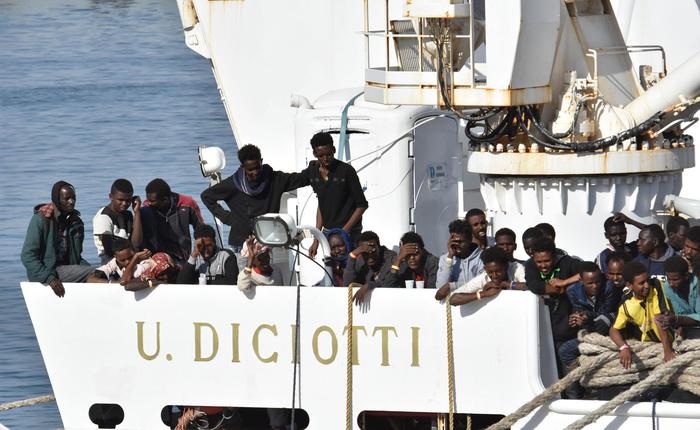 The District Anti-Mafia Directorate of the Public Prosecutor's Office of Palermo has issued a detention of suspected crime against 18 foreign citizens accused of belonging to a transnational criminal association aimed at facilitating illegal immigration and the exercise of abusive service activity payment services through 'hawala' and other crimes against the person, public order, property and public faith; criminal conduct aggravated by having committed the offense with the help of an organized criminal group engaged in criminal activities in more than one state.

The investigations carried out by the Palermo Mobile Squad and the Central Operational Service and coordinated by the Palermo Prosecutor Francesco Lo Voi, the Deputy Prosecutor Marzia Sabella and the Deputy Prosecutors Gery Ferrara, Claudio Camilleri and Giorgia Righi have allowed the arrest of 14 people belonging to of a criminal association, with cells operating in Africa, in different areas of the national territory and in other European and non-European countries, which operated on two different but closely interconnected fronts: the facilitation of illegal immigration and the abusive exercise of intermediation activities financial through the so-called "hawala" method, used mainly for the payment of the travels of migrants or the price of their release from the "safe house" in Libyan territory. Four suspects are still fugitives presumably abroad . Huge sums of money seized during the numerous searches underway throughout Italy.

THE INVESTIGATION- It was "between Milan and the North East" the "base of operations for human traffickers" arrested at dawn today. The investigation is the natural continuation of the "Glauco" operations 1, 2 and 3 conducted between 2013 and 2017 which have allowed, over time, "to identify and identify numerous human traffickers operating on the so-called Central Mediterranean route, many of whom already condemned even definitively to heavy prison sentences, and their representatives on Italian territory. "Already in the course of the investigations called Glauco the role of Ghermay Ermias Alem Ermias - recipient of several precautionary measures and still a fugitive - had already emerged - and precisely from the development of investigations aimed at its research,

It is confirmed that "since 2017, the criminal organization has supported the smuggling activities both during the journey of migrants on the African continent and during their concentration in the prison camps in Libya", say the investigators.

Later, as soon as they finally arrived in Sicily, aboard the ships employed in rescue activities at sea, the suspects intervened, at first, "allowing migrants to leave the reception centers, where they were hosted, hiding them in other places and in some cases providing them with food, lodging, travel documents and false documents, and, at a later time, taking care of their departure to locations in central and northern Italy, from where they can then easily reach places in northern Europe and sometimes the USA - the final destination of their journey ".

On other occasions, the members of the group "contacted migrants directly, who had already arrived in Italy, in order to allow them to continue their journey to other European countries or in some cases even to the United States (managing the dangerous leg of the journey through the countries of South America) ", explain the investigators again. These serial activities to facilitate illegal immigration "were guaranteed against payments made either by the migrants themselves or by their family and friends, often residing abroad, who sent the money requested by the traffickers through the" hawala "(Which allows you to transfer money illegally using a network of intermediaries (hawaladars) operating all over the world)".

In fact, the investigative activities, also supported by observation services with shadowing and search and seizure (both of documentation and money - about 30,000 euros in cash), made it possible to identify Milan, where there is a large community of citizens from Countries of the Horn of Africa, and the North East the operational base of the association (also thanks to the indications provided by a collaborator of justice), as well as the existence of a complex network of hawaladars operating on the Italian territory.

Another relevant aspect are the ascertained numerous contacts between the suspects and the migrants who have just arrived in Italy, "which were therefore facilitated in reaching other European countries, as well as between the suspects themselves and subjects present in the" safe houses "in Libyan territory, structures in which migrants are "detained" before leaving for the Italian coasts ".

From the statements of the migrants, the living conditions in these structures emerged (physical and psychological violence and torture, used by traffickers to obtain from their relatives the payment of sums of money for their release and for the continuation of their travels). "In particular, circumstantial elements were collected both from the declarations and from the technical interception activities against numerous human traffickers, operating in Libya and Sudan and directly managers of some safe houses, unfortunately not fully identified despite the requests for international cooperation in this sense and on which identification investigations are still underway ".

The arrival of some of the migrants who arrived in Italy as part of the following SAR events and their subsequent movement from the national territory to foreign countries (Northern Europe and the USA) is attributable to the criminal group: the landing on 14/07/2017 of 1422 migrants at the port of Catania; the landing on 27/11/2017 of 416 migrants who arrived on board the Acquarius ship at the port of Catania; the landing of 407 migrants on 16/12/2017 at the port of Augusta; the landing on 16/08/2018 of 190 migrants who arrived on board the Navy ship “U. Diciotti ”at the port of Lampedusa. "At the outcome of the investigations, in addition to the associative crime, some of the suspects are charged with the crimes envisaged by the Consolidated Law on Banking regarding the exercise of financial activities, as they provided payment services without authorization" through the system called “hawala” - the possibility, upon payment of commissions, to make and receive payments as well as to transfer funds abroad and in Italy in circumvention of the provisions of the Consolidated Banking Act which regulate similar banking and financial transactions. These offenses are also aggravated by having committed the crime with the help of an organized criminal group engaged in criminal activities in more than one state.

With regard to illegal immigration, various incidents of aiding and abetting have been disputed, all aggravated by having committed the crime using the contribution of an organized criminal group engaged in criminal activities in more than one state and committed in conjunction with persons currently not identified.

EIGHTEEN- The gang of traffickers would also have organized the crossing of the 190 migrants who were rescued by the Diciotti ship of the Coast Guard on August 16, 2018. This is the landing which then cost the registration in the register of suspects of the former Minister of the Interior Matteo Salvini. "A gang of human traffickers, capable of organizing departures from Africa and even escapes from Italian reception centers to move illegal immigrants to the north of the country, to Europe or to the USA, was vanquished in Palermo. The concrete suspicion is that the gang had even dealt with the immigrants disembarked from the Diciotti, another story that for someone had to cost me yet another trial. Thanks to the Police and the judiciary for the brilliant operation. I am increasingly proud to go to court in Catania, the next October 3,