ModernDiplomacy.eu: Conflict in the Mediterranean: What explains Turkey’s aggressive stance? 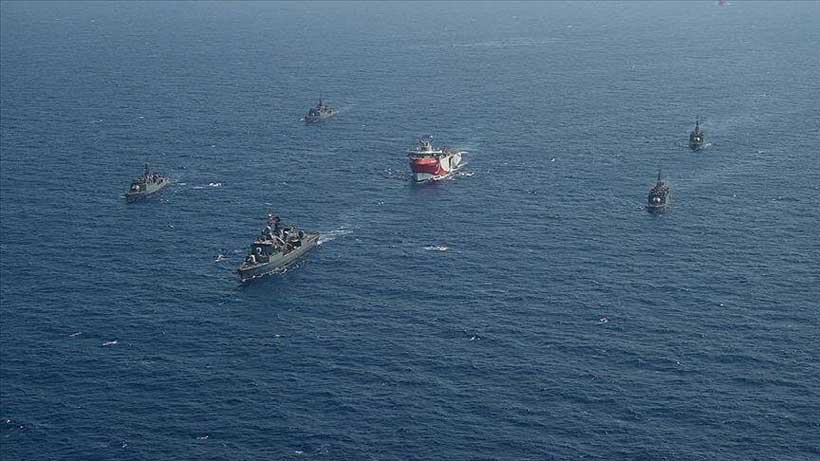 The Eastern European nations of Turkey, Greece and Cyprus have been embroiled in a battle of invectives over the exploration of gas deposits in the Mediterranean Sea. However, words have begun to quickly devolve into explicit displays of military strength as both Greece and Turkey have sent warships to protect deposits they see as falling in their territory. Greece claims that the gas reserves fall in their Exclusive Economic Zone (EEZ) according to the UN Convention on the Laws of the Sea (UNCLOS) while Turkey, a non-signatory to UNCLOS, claims it is covered in their continental shelf region. The European Union has expressed its invariable support to Greece and Cyprus, as both nations are members of the EU, but Turkey has refused to back down. The conflict becomes all the more pronounced because both the nations are NATO (North Atlantic Treaty Organization) members, and in normal circumstances, the US would intervene and guarantee peace. However, the US under President Donald Trump has preferred to take a back seat and focus on domestic issues, with the Presidential elections approaching.

It might be surprising to see Turkey put up such a belligerent and tenacious front in this conflict considering the nosediving global oil prices and the imploding Turkish lira, adding to the shock electoral defeat of President Erdogan’s party in Istanbul’s mayoral elections in 2019. Turkish foreign exchange deposits are at crisis level and they have been depending on Qatari dollars to stay afloat. Some observers have tried to explain Turkey’s stance as being something of a desperate attempt to prop up its economy by securing a lucrative hydrocarbon stimulant. There could be truth to this, but it is a short-sighted explanation. Off-shore gas exploration in itself is a very expensive operation, requiring massive amounts of investment. On top of that, setting up drilling and refining facilities requires further injections of investment, something Turkey by itself is incapable of doing. Add to this the tricky geopolitical situation Turkey finds itself in.

In late 2019, Turkey signed a bilateral maritime agreement with the Libyan Government of National Accord (GNA) indicating that gas exploration in the Mediterranean will not happen without Ankara’s participation. This was also done because the other Mediterranean states developed the EastMed pipeline project without consulting Turkey, through whose EEZ the supply line would have to pass, thereby angering Turkey. Additionally, France and Turkey have been engaged in proxy conflicts and one-upmanship quarrels since many years now. President Macron’s Libya policy, supporting strongman KhalifaHaftar’s coup attempt was one such instance. Recently, Macron’s visit to besieged Beirut and his promise to redevelop harbour areas along with UAE was a win over Turkey’s bid to do the same. The military agreement with UAE in late 2019 adds to France’s military alliance with Greece, Egypt and Cyprus, which is expected to be a retardant to Turkey’s gunboat diplomacy. Historically too, France has unequivocally opposed Turkey’s entry into the EU. This, coupled with US fence-watching, has put the onus on Germany to intervene and prevent any escalation in tensions.

Foreign observers have been left perplexed at Turkey’s confrontational behaviour and refusal to allow compromises. The question is a natural one considering Turkey’s lack of Western European allies and its sinking economy. It must be understood, however, that since Erdogan’s ascension to Presidency in 2014, and a few years prior to that, Turkey’s post-World War Euro-centric national identity had begun to undergo a radical metamorphosis. After the disintegration of the Ottoman Empire, sovereign Turkey sought to align closely with the West not just geo-strategically but also culturally. A new national consciousness was developed which touted Istanbul as the gateway between the West and the Middle-East. However, persistent rejection from EU membership and a continuously eroding strategic depth began changing the nation’s outlook towards the world and its image of itself. Under Erdogan’s muscular leadership, Turkey has sought to establish itself once more as a leader of the Muslim world (evidenced by its decision to designate the Hagia Sophia as a mosque), which explains some of its assertiveness in the Mediterranean. Turkey also holds a crucial card at the negotiating table with Germany after its actions in Syria, where it controls several prisons holding former ISIS fighters, formerly held by the Kurdish authorities. They also control several refugee camps housing thousands of displaced Syrian and Iraqi citizens, and could use this factor to strong-arm EU nations, whose shores would be welcome destinations for the immigrants. In March, Ankara allowed millions of refugees to enter the EU claiming it was unable to contain the large influx of refugees on its territory. In 2016, Brussels and Ankara signed a pact, where EU offered financial aid and other benefits in return for Turkish guarantees of controlling the refugee movement. Relations became fraught when Turkey accused the EU of reneging on the deal when funding dried up. Consequently, Europe now faces a burgeoning refugee crisis, aggravated by the COVID-19 pandemic.

An important and paradigmatic manifestation of the radical transition of Turkish political discourse is its actions to impose naval hegemony in the Eastern Mediterranean. Popularly called “MaviVatan” or blue homeland in Turkish political dialogue, this refers to its steadfast position that the oil reserves under the seabed belong to Turkey, even in the face of stringent EU sanctions and increased diplomatic isolation. It is representative of a changing political doctrine within the nation that threatens to unhinge an unstable peace in the region.

What can be expected?

There is a strong belief that President Erdogan is playing a high-stakes game, but his final intention is not to cause a full-frontal military conflagration, considering the massive odds against Turkey. It is pitted against the economic and military might of the European Union, the United Arab Emirates, and Israel now, following the historic agreement between the two. His actions have been wired to bring all parties to the negotiating table, and get a portion of the gas reserve to stimulate an economy on the brink. A military conflict does not seem likely as preventive measures will be taken, but one can expect this issue to dominate headlines. Moreover, with the USA conspicuously acting as a pedestrian owing to internal political events, the major players in the conflict will wait until November for a coherent strategy to be forthcoming from Uncle Sam. Moscow’s ambivalence and the lack of consensus over decision-making in the EU points towards a protracted period of brinkmanship.