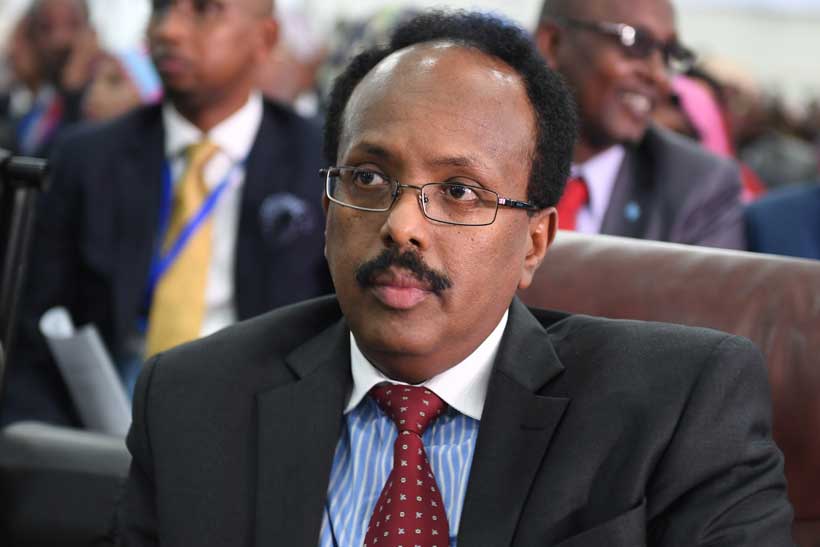 The presidents of Somalia’s states of Jubaland and Puntland, Ahmed Mohamed Islam, better known as Adobe, and Said Abdullahi Dani, arrived in Mogadishu to meet the federal government officials, notably president Mohamed Abdullahi Farmaajo. Their visit followed the third phase and the electoral agreement reached in Dhuusamareeb in Galmudug state by the federal government, the Banadir Regional Administration, Galmudug state, Hirshabelle state and South Western State. The states of Jubaland and Puntland rejected to take part in the third phase of the electoral meeting in Dhuusamareeb during which the electoral agreement had been finalized as those two states complained about the electoral model agreed in the meeting. However, after an international pressure, especially from the American embassy in Somalia which had concerns over what it called “the spoilers” and the absence of Puntland and Jubaland in Dhuusamareeb meeting, the leaders of Jubaland and Puntland caved in and changed their minds after they initially cited issues for their safety if they visited Mogadishu for talks with the federal government and other stakeholders.

The Dhuusamareeb Agreement stipulates that the election will be conducted by the National Election Committee (NEC). However, the NEC will be working with state level players, especially with the traditional elders who picked the current members of parliament. This time the traditional leaders will pick parliament candidates where 301 delegates selected by traditional elders will vote to pick the winners. In each state, there will be four polling stations with 301 delegates to vote in each one of them, which makes 1204 delegates in each member state. The parliament candidates will come from the national parties. This electoral model differs from the previous electoral model which dealt with indirect elections based on the 4.5 clan power-sharing formula. The electoral model adopted in Dhuusamareeb make it difficult this time for various players, both foreign or domestic, to control the picking process of the parliament members where in the previous process, corruption ensued, and foreign involvement and money were used to influence the outcome.

Initially, the Jubaland and Puntland presidents were scheduled to meet Somalia’s president Mohamed Abdullahi Farmaajo, but such meetings were delayed after the two state presidents were reluctant to meet with Mr. Farmaajo; instead, Puntland president met Somalia’s upper house president, the two former Somali presidents, Hassan Sheikh Mohamud and Sherif Sheikh Ahmed, and some other opposition leaders in an attempt to bolster a coalition against the federal government. Nevertheless, the attempt didn’t work as most of those he met were in favor of the Dhuusamareeb deal, didn’t sign the deal and were not legal cosigners of the deal. On the other hand, Jubaland president made a long speech in Somali in the Upper House of parliament, mostly giving the members of the House the latest information on the current affairs of Jubaland and his administration’s perspective. He also mentioned that all stakeholders of Somalia; the federal government, the states, the lower and upper house of the parliament, former presidents and other officials should come together to device a new electoral deal.

Puntland president, Mr. Dani also met members of the upper house. During the meeting, senators asked if Mr. Dani would pressurize president Farmaajo to nominate a new prime minister as prime minister Hassan Ali Kheyre was ousted, and the position is still vacant. Mr. Dani answered the senators question with irony and said he will try to do so but was surprised the senators wanted progress in the matter. This made a social media media uproar on the possibility that Mr. Dani respected the senators’ question.

It is not clear how long president Dani and president Madobe will remain in Mogadishu, or if a deal will be reached anytime soon. It seems every side is insist on their current position, which is not to compromise, while Mr. Dani and Mr. Madobe want the Dhuusamareeb deal to be altered by a third meeting with the federal government and the states.