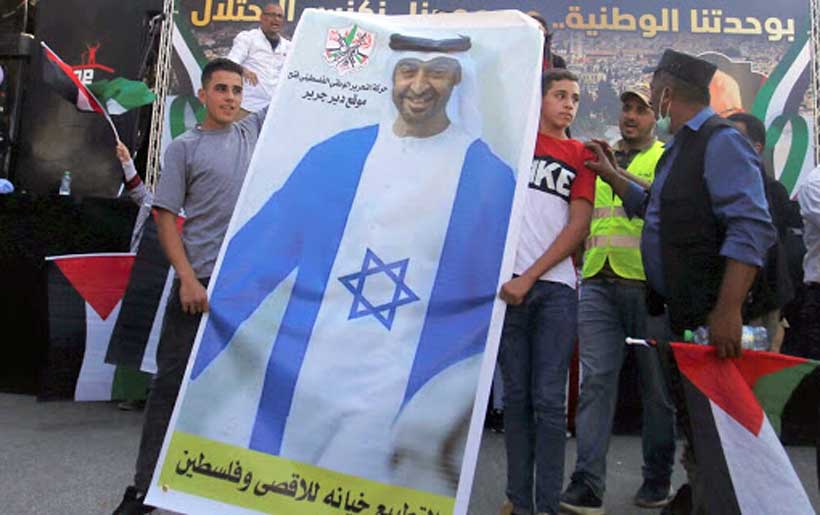 The decision by the UAE to establish diplomatic relations with Israel keeps a negotiated solution with Palestine on life support. There is no indication that forging relations with Israel will be more successful in nudging the Jewish state towards peace with Palestine on mutually acceptable terms than the failed formula of offering Arab recognition in exchange for peace was.

Like it or not, the United Arab Emirates may have done the Palestinians a favor by forging diplomatic ties with Israel. On the face of it, the agreement deprives the Palestinians of a perceived trump card: Arab recognition in return for Israeli withdrawal from territories occupied during the 1967 Middle East war even if it has not proven to be much of an asset.

Historically, forging diplomatic relations with the Jewish state has not been a magic wand to resolve a seemingly intractable dispute.

The carrot of recognition has not helped solve the Palestinians’ problem 72 years after they were first displaced by Israeli occupation and independence and despite the conclusion of peace treaties with Egypt and Jordan—two states that, unlike the UAE, had and still have a direct stake in the Israel-Palestine conflict.

Nor did it stop US President Donald J. Trump from accepting the legitimacy of annexation of occupied Palestinian land.

Nevertheless, the UAE move contributes to salvaging options for a peace settlement that could be acceptable to both Palestinians and Israelis.

Most importantly, it has helped take immediate Israeli annexation of parts of the West Bank off the table by giving Israeli Prime Minister Benyamin Netanyahu the opportunity to temporarily set aside his pledge to incorporate Palestinian land before the November US presidential election without being seen as caving in to American pressure.

To be sure, Mr. Netanyahu has suspended not cancelled plans for annexation in exchange for UAE recognition.

The reality is, however, that Mr. Netanyahu or whoever will eventually succeed him will unlikely get a US green light in the foreseeable future irrespective of who wins the American presidential election.

Neither Mr. Trump nor his Democratic challenger, Joe Biden, will want to jeopardize evolving relations between Israel and Arab states that annexation no doubt would disrupt.

What that does is keep options open; it does not open doors, nor does it create the basis for renewed peace negotiations. The UAE has all but officially embraced Mr. Trump’s Israeli-Palestinian peace plan that explicitly endorses the principle of annexation – a non-negotiable non-starter for Palestinians.

And that is where the problems start. Four decades of primarily US-led mediation efforts, often involving non-starters, have produced at best a seemingly intractable stalemate in which Israel has the upper hand.

Blame for the failure goes round.

Successive US administrations have favored Israel and been reluctant to sufficiently pressure it to enable a viable solution.

Israeli governments diverged in their sincerity in adopting a two-state solution, with Mr. Netanyahu, Israel’s longest-serving head of government, making it clear that he does not want a truly independent Palestinian state to emerge. In fact, he has redefined the concept as one perceived by Palestinians as a Bantustan at best.

Similarly, Palestinians proved to be their own worst enemies. A corrupt Palestine Authority prioritized its own vested interests.

Palestinians, moreover, were divided between Palestinian President Mahmood Abbas’ Fatah movement — that clings to the hope of some miracle that will get decades of peace talks back on track — and Hamas, the Islamist group that controls the Gaza Strip.

Stripped of its rhetoric, Hamas essentially argues that the Palestine Authority’s strategy of surrendering its trump cards – recognition of Israel and abandonment of the legitimacy of political violence – has not persuaded Israel to make the minimal concessions needed.

Those include an end to Israeli settlement policy in the West Bank, a Palestinian administrative stake in East Jerusalem, and an agreement on the final borders between Israel and Palestine based on the pre-1967 war frontiers, albeit modified by land swaps that recognize facts on the ground.

The UAE’s halting annexation for now and keeping the door to negotiations open constitutes a gamble. The primary risk is grey swans or predictable disruptions, not black swans or unpredictable events.

The biggest risk beyond an Israeli decision at some point to move forward with annexation is West Bank protest against Israeli policy to which Israel responds with a heavy hand and military escalation in Gaza.

Palestinian protest is almost a given in a world that has just ended a decade of defiance and dissent, with the 2011 and 2019/2020 popular Arab revolts as its centerpiece and the prospect of global social unrest in the 2020s as a result of the coronavirus pandemic and the worst worldwide economic downturn since World War Two. Add to this the worldwide awareness of entrenched social injustice and racial inequality.

Protest is likely whatever happens. With hope for a two-state solution fading, the alternatives are a one-state solution or continued occupation. Both are potential drivers of social unrest.

Israeli warplanes pounded Gaza, one of the world’s most densely populated regions blockaded by Israel as well as Egypt, on a nightly basis as Israeli and Emirati diplomats finalized terms of their establishment of diplomatic relations. The bombings were in response to the firing of rockets and flying of balloon bombs from Gaza into Israel.

Potentially, heavy-handed Israeli responses to Palestinian protest and Gaza attacks could put the UAE in an uncomfortable position.

With freedom of expression in the UAE and much of the Gulf severely repressed and in the absence of credible public opinion polls, it is hard to assess public empathy for the Palestinians.

A rare poll in Saudi Arabia by a credible non-Saudi polling company showed that the Palestinian issue ranked second after Iran among foreign policy concerns of the kingdom’s public. It is fair to assume that the UAE would not be much different.

While UAE-based tweeters overwhelmingly welcomed the UAE’s outreach to Israel, it was left to Emiratis abroad to be more critical.

“The dustbin of history accommodates all traitors, whatever their names and the names of their families,” tweeted an Emirati activist in exile.

The UAE may hope that diplomatic relations will enable it to nudge Israel towards credible peace negotiations with the Palestinians, in part by empowering Palestinian leaders beholden to Crown Prince Mohammed bin Zayed.

It is a strategy that the United States adopted for much of the past four decades with little result. It’s not clear why the UAE would succeed where others have failed.