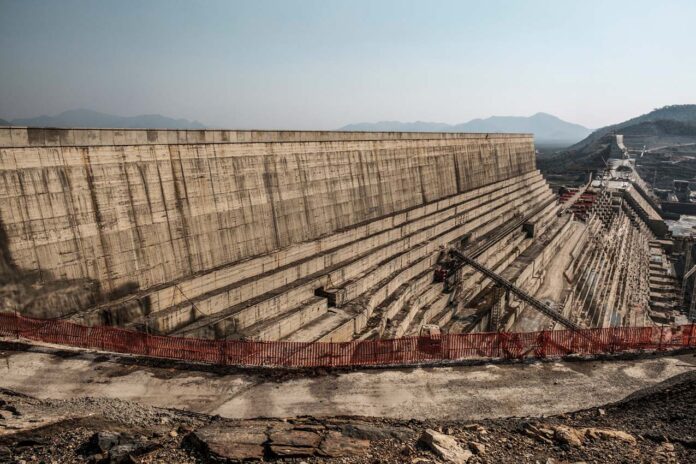 Immovable objects: Neither Ethiopia nor Egypt have given much away during negotiations. (Photo by Eduardo Soteras/AFP via Getty Images)
Asmamaw Tadege Shiferaw  Anteneh Biru
28 Aug 2020
https://app.speechkit.io/api/v2/projects/2404/podcasts/iframe.html
READ ALL OUR CORONAVIRUS COVERAGE

You may have heard about the long-standing impasse between Ethiopia, Egypt and Sudan over the Grand Ethiopian Renaissance Dam (GERD) — a mega hydropower project which was started in 2011.

It is now 75% completed, according to the Ethiopian government reports. The first phase of the water-filling process was completed recently, and the dam now contains 4.9-billion cubic metres of water.

For the past 10 years, the three countries have been trying to reach an agreement over the filling of the dam. The negotiations, however, have made no progress and have practically come to a deadlock.

The deadlock occurred because Egypt and Sudan want to sustain the 1929 and 1959 agreements that were signed over the sharing of the Nile water. Neither agreement made any allowance for the water needs of Ethiopia and other riparian states that were not party to the deal.

In the current negotiations, Ethiopia believes the case of the GERD and that of the broader Nile water sharing are two different issues and must be addressed separately. For now, Ethiopia wants the negotiation to focus on issues related to the filling of the dam; and strongly believes that the broader water sharing agreement can only be negotiated by including other riparian states, such that an agreement that binds all the states is secured.

Egypt and Sudan, however, are not willing to look at these two issues differently and they seem not to be interested in the involvement of the other upstream countries along the river.

Neither are they willing to sign the Co-operative Framework Agreement (CFA) that is designed to facilitate the conservation, management and development of the Nile River Basin and its water. Simply put, there seems to be a lack of will on the part of Egypt and Sudan to accommodate the simple fact that the Nile River is a regional watercourse and that its management must be approached from a regional perspective.

GERD is a dam built mainly for hydropower generation and experts agree that it will not have a significant negative impact on the downstream countries as long as the dam is filled within a reasonable period. Egypt and Sudan, however, seem to be pressing to strike an unfair deal to use the GERD for drought mitigation, demanding minimum release of water during dry seasons, while at the same time pushing for the status quo to be binding. This is a complete disregard for the rights of Ethiopia and other riparian states.

The Nile is important to all riparian states

Ethiopia understands the importance of the Nile river to the Egyptians and the Sudanese. It is also important that Egypt and Sudan recognise the importance of the Nile to Ethiopia and its right to use its own water resources (the Blue Nile) for its own development. This mutual understanding is necessary for any meaningful negotiation to take place.

It is known that Egypt and Sudan have been able to harvest and utilise the water flowing directly from the highlands of Ethiopia for their own development. Egyptians have 100% electricity access and clean water supply; and they are also producing cash crops for export purposes. On top of that Egypt has also been experimenting a lavish development, the Toshka project (greening a desert), with the Nile river — diverting part of the river into the Sahara Desert by constructing a system of canals to a length of about 240km.

On the other hand, Ethiopia whose highlands contribute about 87% of water to the Blue Nile, faces unjustified obstacles, particularly from Egypt, to its development activities. This while over 60% of Ethiopia’s population have no access to electricity and clean water; and when it is well-known that parts of Ethiopia undergo a recurrent drought which affects most farmers whose livelihood depends on farming.

It goes without saying that the need of the Ethiopians for using the Nile river is not any less than that of the Egyptians and the Sudanese and it should not be downplayed.

For unfolding any meaningful negotiation, it is important that Egypt and Sudan understand that they have had an unfair advantage over the Nile at the expense of Ethiopia and the other upstream countries. Egypt’s stance throughout the negotiation process, in particular,  is indicative that it is seeking to prolong this unfairness into the future. This complete disregard of reason and fact stood in the way of negotiating towards a win-win solution.

The principles of international water law entitles a watercourse state to an equitable and reasonable share of uses and benefits of the particular watercourse. What exactly is meant by “equitable” and “reasonable”, however, is hanging in thin air and interpreted differently by the different parties in the Nile basin.

Egypt’s politicians and scholars’ interpretation, however, of what is “equitable” and “reasonable” appears to be significantly different from what most experts in the area understand the expressions to mean.

To them, equitable and reasonable utilisation  seems to mean simply sustaining the 1959 agreement, and Egypt’s so-called “historical rights”, which amounts to saying that no upstream country can use the Nile water.

For upholding equitable and reasonable utilisation, however, a change in this have-it-all attitude is required on the side of Egypt and Sudan; and the GERD is offering a new opportunity to effect that necessary change.

Furthermore, Egypt is exploiting the sympathy for its water vulnerability as a strategy for getting international support. With the same rhetoric, Egypt continues to frustrate the efforts of the other riparian countries for securing an agreement that is balanced, fair, and equitable for all. It is a known fact that Egypt goes to the extent of wanting to interfere with internal issues of Ethiopia.

In recent months, in what appears to be a search for a military base, Egypt’s military and intelligence officers have been reported to have made visits to South Sudan, Somalia and Somaliland. All these three countries have security and stability problems. Not only is Egypt’s activity an offtrack to the negotiation process but also a dangerous move that can exacerbate the already fragile peace and security of the region.

The United States, with a concern about the stability of the region, showed an interest to mediate between the three countries. Last year, it approached Ethiopia to witness the negotiation process over the dam; and Ethiopia agreed in good faith. It seems now, however, that the US has shown partiality towards Egypt’s interests in the negotiation.

The US is now openly pressing Ethiopia to sign an agreement that favours Egypt’s interest. There are also reports that showed the US is threatening to withhold aid money to Ethiopia. In addition to that, the US State Department released a press statement saying that Ethiopia may be running out of time to negotiate an agreement on the filling and operation of a mega-dam. It appears that the US has a dog in the fight and its involvement has complicated the negotiation process.

We also believed that it was the US that influenced Sudan to shift its position. In many negotiations, Sudan had been expressing its support for the GERD, based on the advantages the dam offers to the Sudanese. The position of Sudan has changed significantly, however, since the US started the mediating/witnessing role in the negotiation. This has added further complications to the negotiation process.

The points we have raised so far have highlighted the contexts, the hurdles and opportunities of the dispute.That said, we find it worthwhile to accentuate some points which in our opinion are very important to facilitate an agreement that is a win-win for all sides.

Towards a win-win solution

All parties must accept that negotiation is the only way to reach a mutual agreement. In this regard, Egypt must stop cultivating political differences in Ethiopia as a strategy to distract Ethiopia from using the Blue Nile. This is not only short-sighted but also a dangerous strategy that is contributing to the disruption of peace and security of the already volatile region.

The  preconditions set by Egypt and Sudan are not only unjustified and a snub to all upstream countries but also an implicit recognition of anachronistic colonial agreements. These conditions are not acceptable to Ethiopia and the other upstream countries. The better way forward is starting afresh and cultivate the will to forge ahead towards co-operation.

External parties such as the US and the World Bank must maintain, if all the parties want, their observer role with impartiality. If the US remains partial, it will adversely affect the natural process of the ongoing negotiations.

Finally, drought and water shortage in the region should be mitigated by a co-ordinated regional effort, more importantly by a sustainable and more effective use of water across the region. The Nile basin farming system and production, particularly irrigation water use in Egypt and Sudan, which consumes vast quantities of the Nile water should be revised.

Egypt and Sudan also need to install more effective methods for water use in their cities and towns. When and where feasible, alternative water sources, such as extraction of groundwater and desalination of seawater should be considered. More importantly, to avoid unnecessary wastage of water in the region where water is a scarce commodity, Egypt must stop diverting the Nile River from its natural watercourse into the Sahara desert.

*Asmamaw Tadege Shiferaw is an associate professor at the Norwegian University of Life Science and Anteneh Biru is senior engineer at the Norwegian Geotechnical Institute. As Ethiopians, they are interested in the progression of the GERD and the country and write in their personal capacity.