TheNewYorkTimes.com: The Dictator Who Waged War on Darfur Is Gone, but the Killing Goes On.

The ouster of Sudan’s longtime ruler last year stoked hopes for peace in brutalized Darfur. But violence has surged amid fresh accusations against Sudan’s security forces.

United Nations peacekeepers scrambled to the scene but said they found the road blocked by obstacles placed in their way, and continued on foot. When they arrived after two and a half hours, it was too late.

At least nine people lay dead, including a 15-year-old boy, and another 20 were seriously wounded, according to the United Nations.

The attack in Fata Bornu, a remote hamlet of 4,000 people, echoes the grimmest days of the Darfur conflict in the 2000s. But it happened just this month — over a year since euphoric protests toppled Omar Hassan al-Bashir, the detested dictator whose alleged atrocities in Darfur earned him an indictment on genocide charges in an international court.

Now Mr. al-Bashir languishes in jail and Sudan is run by a joint civilian-military government that has promised to usher in a new era of democracy, and finally — after 17 years of suffering — bring peace to Darfur. 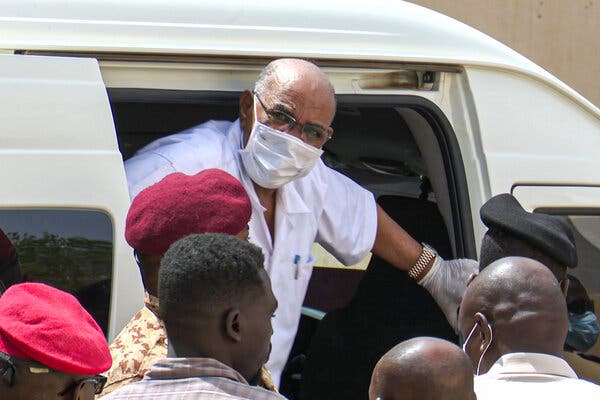 But while the revolution brought some change to Sudan’s cities, that is not the case in Darfur, where the notorious janjaweed — nomadic Arab militias — still ride free. Heavily armed gangs continue to massacre, plunder and rape in scorched-earth tactics that recall the worst days of Mr. al-Bashir’s rule.

And the Sudanese military has faced accusations of negligence, as in Fata Bornu, or even being complicit.

“They stand silent in front of the janjaweed attacks,” said Adam Mohamed, a senior leader of Darfur’s displaced community, in a telephone interview. “They do nothing.”

The tempo of violence quickened in recent days with another 60 civilians massacred on Saturday in an assault by about 500 Arab militiamen, according to the United Nations — the deadliest attack in months. Two days earlier, 15 people were killed in a different part of Darfur, local news media reported.

But distrust of the security forces runs high in Darfur, where the military has an ignominious history of manipulating, and frequently directing, ethnic violence, according to human rights groups.

“When you see attacks like this one, and it’s just another Tuesday in Darfur, you realize that not much has changed since the revolution,” said Cameron Hudson, a former State department official and Sudan expert at the Atlantic Council’s Africa Center, a research group, speaking of the attack on Fata Bornu.

While Sudan’s dictator has been vanquished, his legacy has proved harder to dismantle, and the transition to democracy has stalled perilously in key areas.

A transitional legislature, announced last year, has yet to be formed. The youthful democracy campaigners who helped to oust Mr. al-Bashir have split into factions. A campaign to get the United States to lift its designation of Sudan as a state sponsor of terrorism, which perpetuates Sudan’s pariah status and blocks foreign investment, has run into sand.

And the country’s transitional government, which is supposed to pave the way for a general election in 2022, is troubled by tensions between military and civilian leaders, Western diplomats say, as well as periodic rumors of a military coup.

Young Darfuris were at the forefront of last year’s uprising, when some were arrested and tortured by Mr. al-Bashir’s security forces. Their high profile fueled their expectations that the revolution might bring radical change to Darfur. But the dynamic of the conflict remains the same.

The war in Darfur erupted in 2003 when Darfuri rebels, angered by longstanding discrimination against the region’s non-Arab population, rose up against the government. Mr. al-Bashir hit back by arming the janjaweed, who killed thousands of civilians monthly at the height of the war, in attacks that the International Criminal Court has classified as genocide.

The United Nations estimates that at least 300,000 people have died in a conflict that decreased in recent years, but never stopped.

Since the ouster of Mr. al-Bashir in April of 2019, one of the most powerful figures in the new government, to the dismay of many Darfuris, has been Lt. Gen. Mohamed Hamdan, a commander whose Rapid Support Forces paramilitaries have been linked to atrocities in Darfur.

Mr. Hamdan is now part of a government-led effort to negotiate peace with two Darfuri rebel groups. But many Darfuris see the talks as little more than window-dressing because the largest rebel group, led by a former lawyer, Abdul Wahid al Nur, has spurned them.

The escalating crisis comes just as the international community is shifting attention away from Sudan.

The United Nations peacekeeping mission to Darfur, formed in 2007, is expected to shut down by the end of the year. And Western governments have slashed their aid budgets for Sudan, even as the pandemic plunges the country deeper into poverty. Some 9.6 million people urgently need food aid, the most ever for Sudan, according to the United Nations.

Foreign officials, eager to prop up Sudan’s shaky transition to democracy, appear to be reluctant to point blame at its fledgling government when trouble erupts in Darfur.

After the attack on Fata Bornu on July 13, the United Nations peacekeeping mission, which is run jointly with the African Union, framed the violence as a seasonal dispute between herders and pastoralists. “The farming seasons in Darfur have witnessed such occurrences in the past,” it said in a statement.

The top U.S. State Department official for Africa, Tibor Nagy, reinforced that narrative a day later with praise on Twitter for cooperation between Sudanese security forces and United Nations peacekeepers in Darfur.

The villagers, mostly people displaced by earlier fighting, had been protesting for two weeks before the attack. They demanded the resignation of the local governor, Maj. Gen. Malik Al-Tayeb Khojaly, accusing him of siding with the local Arab community.

On July 12, General Khojaly responded to the villagers’ demands by withdrawing security from the area, villagers told United Nations officials. The Arab militiamen, who were at least 100 strong, attacked the next morning.

The United Nations peacekeepers, mostly from Senegal, heard gunfire and saw plumes of smoke as they approached the camp. When a contingent of at least 130 peacekeepers finally arrived, they found terrified villagers huddled outside a school or hiding in the bushes.

It was unclear if Sudanese troops had stood aside to allow the attack to take place, but an internal United Nations report pointedly noted their absence.

“None of the GoS security forces were on the ground to defend the IDPs,” it said, using shorthand for the Sudanese government and internally displaced people.

A spokesman for the Khartoum government did not respond to requests for comment. An official delegation visited Fata Bornu and promised to investigate the attack.

Ashraf Eissa, a spokesman for the United Nations peacekeepers, said it was “doing its best” to protect civilians in the parts of Darfur where it still deployed. Since 2018, the mission has closed bases across Darfur and reduced its strength to 6,500 peacekeepers, down from 19,500.

“This is a mission in exit mode,” he said.

Beyond Darfur, last year’s revolution has brought some significant changes to Sudan.

Mr. al-Bashir’s once-powerful Islamist party has been dissolved and Mr. Hamdok, a mild-mannered technocrat, has introduced a raft of modernizing legal reforms. Female genital cutting has been outlawed. Women can no longer be arrested for wearing clothing deemed insufficiently modest, and flogging has been abolished for all lawbreakers.

The apostasy laws have been scrapped, Christians are allowed to consume alcohol, and any citizen can leave Sudan without an exit visa.

Gay sex is no longer punishable by the death penalty, though it is still subject to a seven-year jail sentence.

And Mr. al-Bashir, 76, is behind bars. Sentenced to two years imprisonment for corruption in December, the deposed autocrat reappeared in court last week to face separate charges over the 1989 military coup that catapulted him to power. If convicted, he faces the death penalty.

On June 30, frustration with the slow pace of change prompted giant street protests across Sudan, the first since last year. “Freedom, peace and justice,” chanted the crowds, echoing a slogan of the anti-Bashir movement. One of the protests took place in Fata Bornu.

But many other Darfuris, abandoning their dreams of change, have fled to Libya to try the perilous sea crossing to Europe, or have ended up in refugee camps in neighboring Chad.

“The Khartoum government is telling them to be patient,” said Jérôme Tubiana, co-author of a recent report on the exodus for the Small Arms Survey, a research institute in Switzerland. “But they don’t trust them. For many, the enemy is no longer Bashir — it’s the center of Sudan.”

Civil society leaders in Darfur say it is crucial that some form of peacekeeping mission step in when the United Nations mission leaves Darfur.

“We need to protect the lives of the people,” said El Sadig Hassan, secretary-general of the Darfur Bar Association. “Otherwise, the crisis will continue.”