The massive Ethiopian dam is a flash point for tensions in Africa—and is now sowing confusion and discord within the U.S. government, with many officials concerned Washington is too much in Egypt’s corner. 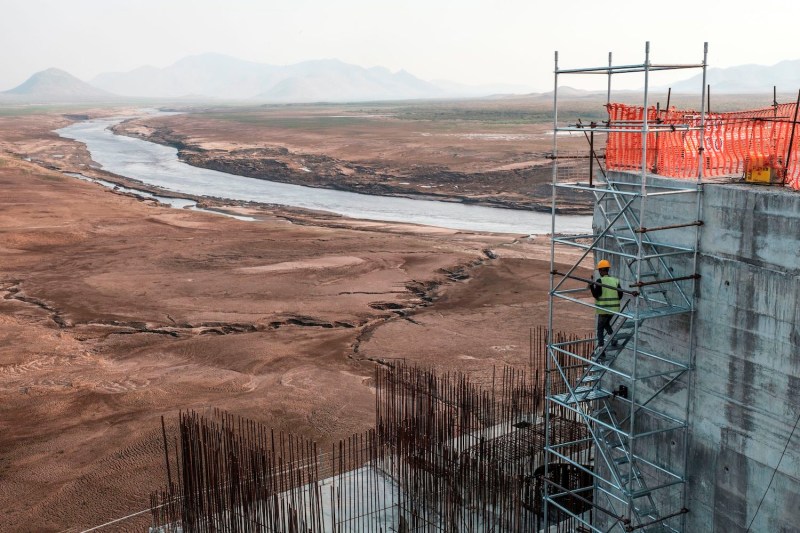 A construction worker at the Grand Ethiopian Renaissance Dam (GERD), near Guba in Ethiopia, on Dec. 26, 2019. Eduardo Soteras/AFP via Getty Image

The Trump administration is weighing withholding some aid to Ethiopia over a Nile dam project that has severely strained its relationship with downstream countries Sudan and Egypt, six officials and congressional aides familiar with the matter told Foreign Policy.

The massive dam, Africa’s biggest, has become a flash point of geopolitical tensions between Egypt and Ethiopia, with Egyptian President Abdel Fattah al-Sisi hinting that his country could use military force to halt the project. Many in Egypt fear the dam could threaten its water supplies.

But some U.S. officials said the project has also fueled divisions and confusion over policy within the U.S. government, ever since Sisi asked President Donald Trump to help mediate negotiations over the dam last year.

U.S. participation in four-way talks over the dam earlier this year, led by the Treasury Department, helped advance talks. However, Ethiopia refused to sign a final agreement. Now there’s growing concern that the Trump administration is putting its thumb on the scales to favor Egypt at the expense of Ethiopia—even as new signs of progress emerge in negotiations.

“The Trump administration has gotten it into its head that it has to take Egypt’s side on this,” said one U.S. official familiar with the matter. “Nobody in the White House seems to be looking at this through the Africa lens and its impact on Ethiopia, which is equally important,” the official added. “This is just shooting ourselves in the foot.”

A Treasury Department spokesperson said the administration is working as an impartial mediator. “The sole objective of the U.S. government has been, and continues to be, to assist Egypt, Ethiopia and Sudan in reaching a fair agreement on the filling and operation of [the dam] that addresses the interests of all three countries,” the spokesperson said.

On Tuesday, Ethiopia said the three countries had made “major” progress on their dispute in talks brokered by the African Union, and they agreed to more negotiations aimed at a comprehensive solution on water issues around the dam. The announcement sends a positive signal to some U.S. officials and observers who feared that if Ethiopia continued filling the reservoir behind the dam without an agreement with Egypt, regional tensions could boil over into a military confrontation.

Two administration officials who spoke to Foreign Policy cast the announcement as an indication that negotiators have laid the groundwork for a final agreement. “The Trump administration’s engagement has helped Egypt, Ethiopia and Sudan make more progress in negotiations over the last nine months, than the last nine years,” said one. “The considerable work by Egypt, Ethiopia, and Sudan over the last nine months shows it is possible to come up with a fair and balanced agreement if there is a commitment among all to do so.”

In the “major common understanding” reached Tuesday by Ethiopia, Egypt, and Sudan, the three countries agreed to have more technical discussions on the pace of the reservoir fill and drought mitigation measures with an eye toward inking a final agreement.

Several U.S. officials said that the Trump administration could move forward with aid cuts to Ethiopia if negotiations hit another impasse and the sides can’t reach a final deal.

Talks are stalled over how to deal with the impact of a $5 billion dam that could threaten Egypt’s lifeblood.

The idea of a massive hydroelectric project on the upper Nile River, in the Ethiopian highlands, has been a dream since the days of Ethiopian Emperor Haile Selassie in the 1960s. But it wasn’t until 2011 that the Grand Ethiopian Renaissance Dam got underway in earnest—and ever since, relations with the downstream countries Sudan and Egypt have been fraught. For Ethiopia, whose citizens bankrolled the $4.6 billion project, the dam is not just a way to provide electricity to a power-starved corner of the continent but has become a point of national pride and emblematic of the country’s ambitions as a regional power.

Though the U.S. State Department traditionally handles diplomatic issues, Trump abruptly tapped Treasury Secretary Steven Mnuchin to lead mediation efforts during a phone call with Sisi last year. Some U.S. officials said that has led to growing divisions between Treasury and State and confusion at embassies in Africa over how Washington is handling the negotiations.

Others dismissed this narrative, insisting that the two agencies were coordinating closely. “Secretary Mnuchin and Secretary Pompeo have worked in close coordination throughout this process, as have the teams at Treasury and State,” the Treasury spokesperson said. Foreign Policy was told that the State Department has been involved in every meeting on the issue since Washington began facilitating negotiations from November 2019 through this February.

Ethiopia made it clear that it would continue the dam project despite lingering disagreements with other Nile-dependent countries, and in fact it began filling the massive reservoir behind the dam this month, taking advantage of Ethiopia’s rainy season. Egyptians fear Ethiopia will fill the dam over a period of just a few years, which could choke off water supplies that Egypt needs downstream, especially for agriculture. The Ethiopian government says the pace of filling shouldn’t affect Egypt’s allotment of water, and it further maintains that Egypt has used more Nile water than it’s entitled to for decades.

Images from the European Space Agency’s Sentinel-1 satellite show expanding water levels between July 26 and July 11 behind the Grand Ethiopian Renaissance Dam on the Blue Nile in northwestern Ethiopia. The region has recently seen above-average rainfall.

This month, the Treasury Department asked the State Department for a rundown of all U.S. aid pledged to Ethiopia, a move three officials said is aimed at withholding some or all of the non-humanitarian aid as leverage if the negotiations stall. Any decision to alter or withhold U.S. aid, however, would rest with the White House or Congress.

It’s not clear what specific aid would be withheld if the administration carried out the plan under consideration, several officials said. One point of leverage under discussion is projects from the U.S. International Development Finance Corporation (DFC) that could spur up to $5 billion in investments, two officials said. In fiscal year 2019, the United States provided a total of $824.3 million in assistance to Ethiopia, of which $497.3 million was humanitarian aid, a State Department spokesman said. Officials stressed that no aid funding for humanitarian needs would be held up. The spokesman declined to comment further on interagency deliberations.

The White House did not respond to request for comment.

Several U.S. officials, speaking on condition of anonymity, said some at the State Department and U.S. Agency for International Development opposed withholding aid from Ethiopia, fearing it would damage already fraying relations between Addis Ababa and Washington at a precarious point in Ethiopia’s political transition.

The killing of a prominent Ethiopian singer late last month sparked a surge in protests and fueled religious and ethnic tensions in the country, marking one of the biggest challenges yet for the country’s stability under Prime Minister Abiy Ahmed.

One official said the State Department is “slow walking” the request from Treasury.

Three other officials gave conflicting accounts of whether the Treasury Department is cutting the State Department out of talks: Two said this was the case, and even top U.S. diplomats stationed in Egypt, Ethiopia, and Sudan are cut out of talks. The third official said this was untrue and reiterated that the negotiating teams and U.S. embassies are coordinating closely.

When approached for comment on whether DFC projects to Ethiopia are in consideration of being held up, a DFC spokeswoman said: “We have worked closely with Ethiopia on key reforms to advance competitive, open markets, which helps position Ethiopia for a significant DFC commitment that would catalyze billions in financing from the private sector. Private sector investment would help create jobs and increase economic opportunity in the country.”

In recent months, Egypt has tried to exert pressure on Ethiopia to halt filling the dam both through the Trump administration and through meetings at the United Nations Security Council.

Fraught diplomatic negotiations between Egypt and Ethiopia have for years centered on how quickly Ethiopia would fill the dam. Egypt has pushed Ethiopia to slowly fill the dam over the course of a decade or more—which could delay the dam’s provision of large amounts of electricity—while Ethiopia pushed to fill the dam in three years. Another lingering point of contention between the two countries is what steps Ethiopia might take to alter the filling schedule in case of drought, to ensure that a sudden spell of dry years during the filling process doesn’t leave Egypt starved for water.