IRRIN.org: Western Sahara: “No one even knows if we’re there or not.”

Freelance journalist who has reported on social affairs, international politics, and refugees from Europe, the United States, and Africa.

Several days of UN-convened informal talks on the Western Sahara late last month appear to have yielded little towards bringing the decades-long conflict to a close. For many young Sahrawi refugees, a lifetime of failed diplomacy has left them hopeless at what they say is a frozen peace process, a glaring lack of opportunity, and a world that seems to have forgotten they exist.

Abdullah Mohamed-Salem Tlaimidi, 22, returned last month from six months of manoeuvres and small arms training with the Polisario Front, which considers itself the liberation movement of Western Sahara’s indigenous Sahrawi people. The experience was “the best thing I’ve seen in my life,” he says, grinning as he prepares tea in his living room in traditional Sahrawi fashion, foaming the brew by pouring it quickly from glass to glass.

His time at the desert frontier was a break from the tea and chatter that punctuates his life here in the refugee camps in Tindouf, where a few weeks helping out in a restaurant is the most work Tlaimidi has found since he dropped out of high school two years ago.

It has also sharpened his conviction, one shared by many of his peers, that only a return to fighting will prevent them from spending their entire lives displaced and forgotten. “War is the only solution,” he says in a calm and measured tone.

Morocco annexed two-thirds of Western Sahara shortly after Spain retreated from its former colony in 1975, sparking a war with the Sahrawi Polisario Front that lasted until 1991 and displaced tens of thousands of indigenous Sahrawi refugees to western Algeria’s Tindouf province.

More than 170,000 Sahrawis now live in the Tindouf camps, the UN’s refugee agency, UNHCR, estimates — most in mud-brick homes spread across five districts, each bearing the name of a town in Western Sahara.

Many people in this expanse of craggy desert are separated from their families in the Moroccan-controlled region and depend on aid for their basic needs. UNHCR says refugees have access to just over half of the 20 litres of water per day it considers a minimum, and Oxfam, which has worked in the Tindouf camps since 1975, says nutritional-related illnesses like anaemia, diabetes, and stunted growth are widespread. Education and healthcare are chronically underfunded.

There is also a shortage of jobs and opportunity, which has left many young Sahrawi refugees frustrated. And while UN Secretary-General Antonio Guterres reportedly told the Security Council Monday that “a solution to the conflict is possible,” all this leads some to believe that a return to violence is their best option.

There has been no full-fledged war in Tlaimidi’s lifetime: a 1991 ceasefire deal brought 16 years of fighting to a close and created the UN peacekeeping mission MINURSO (United Nations Mission for the Referendum in Western Sahara).

But there has has also been little in the way of political progress. The UN promised a referendum on self-determination for the Sahrawis as part of the 1991 agreement, but the terms of that vote have never been agreed. The Algeria-backed Polisario Front demands the option for full independence, but Morocco is only willing to consider autonomy under its flag.

Anna Theofilopoulou, who was part of the UN’s negotiating team from 1994 - 2006, says she is “doubtful” the referendum will ever happen.

“For reasons outside Polisario's control, for the most part, it has not managed to [deliver a referendum],” she says. “But it remains engaged in the UN process while having to contend with mounting frustration in the camps, especially among the young people.”

“A lot of people go to university or school … but then they come back [and] what can they do? Nothing.”

Children pursue primary education in Polisario-run schools, then tend to continue their studies outside the camps in Algeria. Over 3,000 Sahrawis from the camps are currently enrolled at undergraduate or postgraduate level in Spain, Cuba, Venezuela, and elsewhere, according to the Poliario’s Sahrawi Department of Education.

But when their visas expire and they return to their families, employment is almost non-existent. Overqualified graduates are lucky to find part-time work in the few stores, workshops, restaurants, and ramshackle petrol stations that make up the local economy. During the long and empty hours, discussions over tea turn to the opportunities an independent Western Sahara might bring.

It’s a topic Mohamed Sulaiman, an activist who was born in the camps, has hashed out time and time again.

“A lot of people go to university or school … but then they come back [and] what can they do? Nothing”, he says. “They just have to support their families, support themselves with any possible way they can come across.” 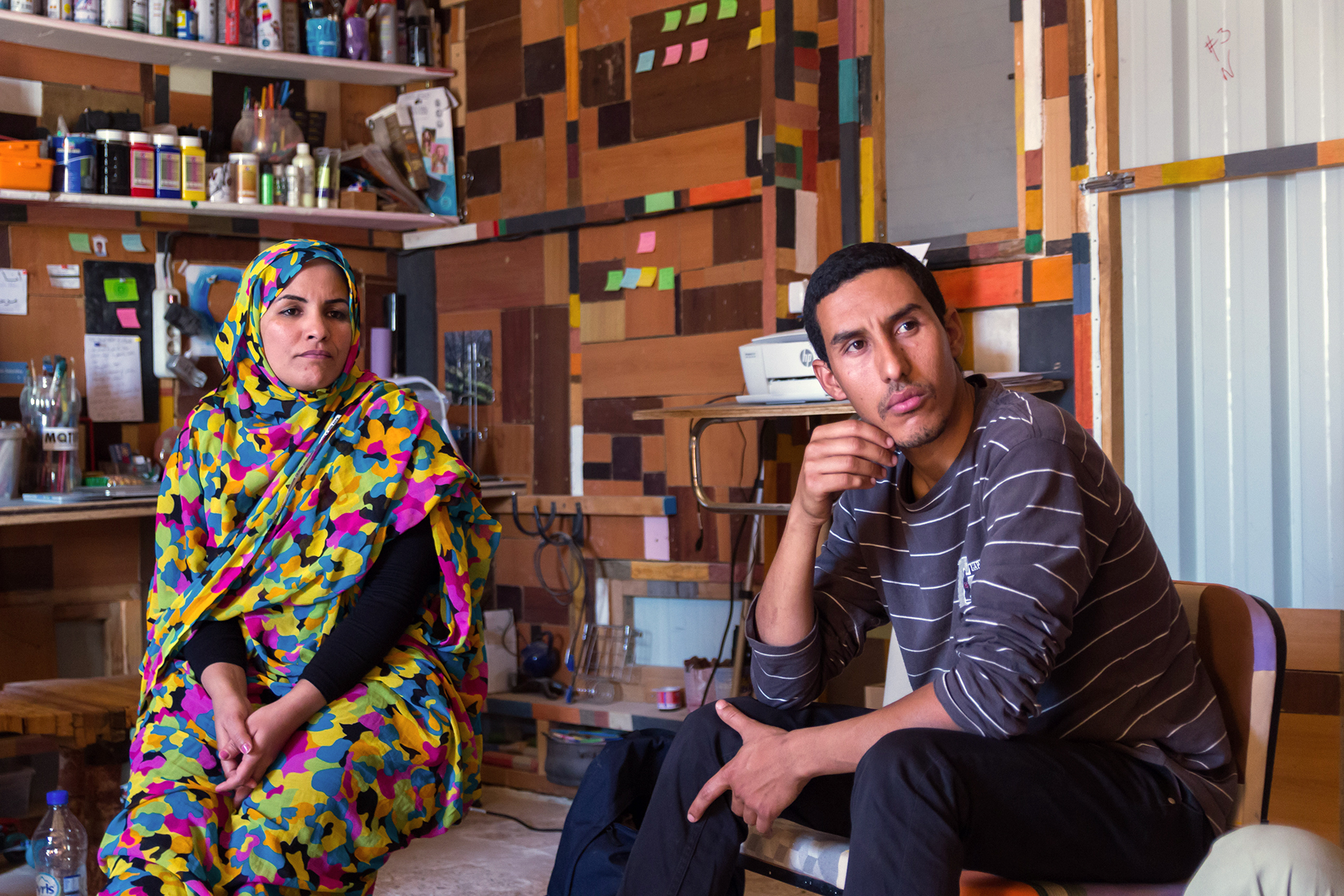 Ruairi Casey/TNH
The newest front in the struggle against Morocco for Mohamed Sulaiman and other pro-independence activists is on Facebook and Twitter.

Sulaiman is part of a vibrant civil society in Tindouf that advocates for peace, but he sympathises with voices like Tlaimidi’s calling for more radical action. “You can’t just sit down in the middle of the desert for 40 years expecting something to happen.”

After 12 years studying in Algeria and brief stints as a teacher and translator, Sulaiman found his calling as an artist working with materials found around the camps. A replica of Hokusai’s “The Great Wave”, made from plastic bottles, sandals, and other detritus stands outside his self-made studio, the blue palette a dazzling contrast to the sand-swept homes around it.

Inside, a dozen pro-independence activists sit on chairs and tires, discussing the newest fronts in their struggle against Morocco: Facebook and Twitter. Since the internet became widely available in the camps in the early 2010s, young Sahrawis have used social media to raise awareness of their cause and coordinate with their fellow activists living under Moroccan rule, who, according to Amnesty International, face routine police violence during demonstrations.

“You can’t just sit down in the middle of the desert for 40 years expecting something to happen.”

Morocco has long regarded the Polisario Front as nothing more than a conduit for Algerian provocation, and has accused it of keeping all refugees in Tindouf hostage and preventing them from reuniting with their families under Moroccan rule.

“The youth in the Tindouf camps are brainwashed and do not have the opportunity to see the real situation next door because they are living in a military blockade,” its London embassy said via email.

Calls for war are not new among Sahrawi refugees. The Polisario Front has steered a careful course since the 1991 ceasefire, even when tensions reached boiling point in the past, like during Morocco’s violent suppression of a protest camp outside Western Sahara’s largest city of Laayoune in 2010.

The Polisario Front leadership remains in the hands of war veterans like 69-year-old secretary general Brahim Ghali, who began the insurgency against Spanish colonial rule. There are internal concerns, however, that successors will be more impetuous and see war as a necessity to gain international attention and prevent another 40 years of waiting.

One senior Polisario Front official said, speaking before the recent talks, that it had “performed miracles” to keep young Sahrawis in school and away from extremism, but that if the UN process continued without results there would be little more it could do to maintain peace.

While it still seems unlikely Algeria would want open warfare by a group it supports on its border, past events suggest the Polisario Front’s military might act independently of its benefactor. And a poll conducted by the anti-violence group NOVA in 2014 found that 62 percent of Sahrawi refugees between the ages of 18 and 40 support a return to violence.

The number is shocking, says NOVA vice president Shaia Luali, but a predictable result of a generation whose efforts and education have failed to deliver the future they were promised: “When you invite people to participate in dialogue and training they usually ask you the question – ‘What’s the benefit?’” 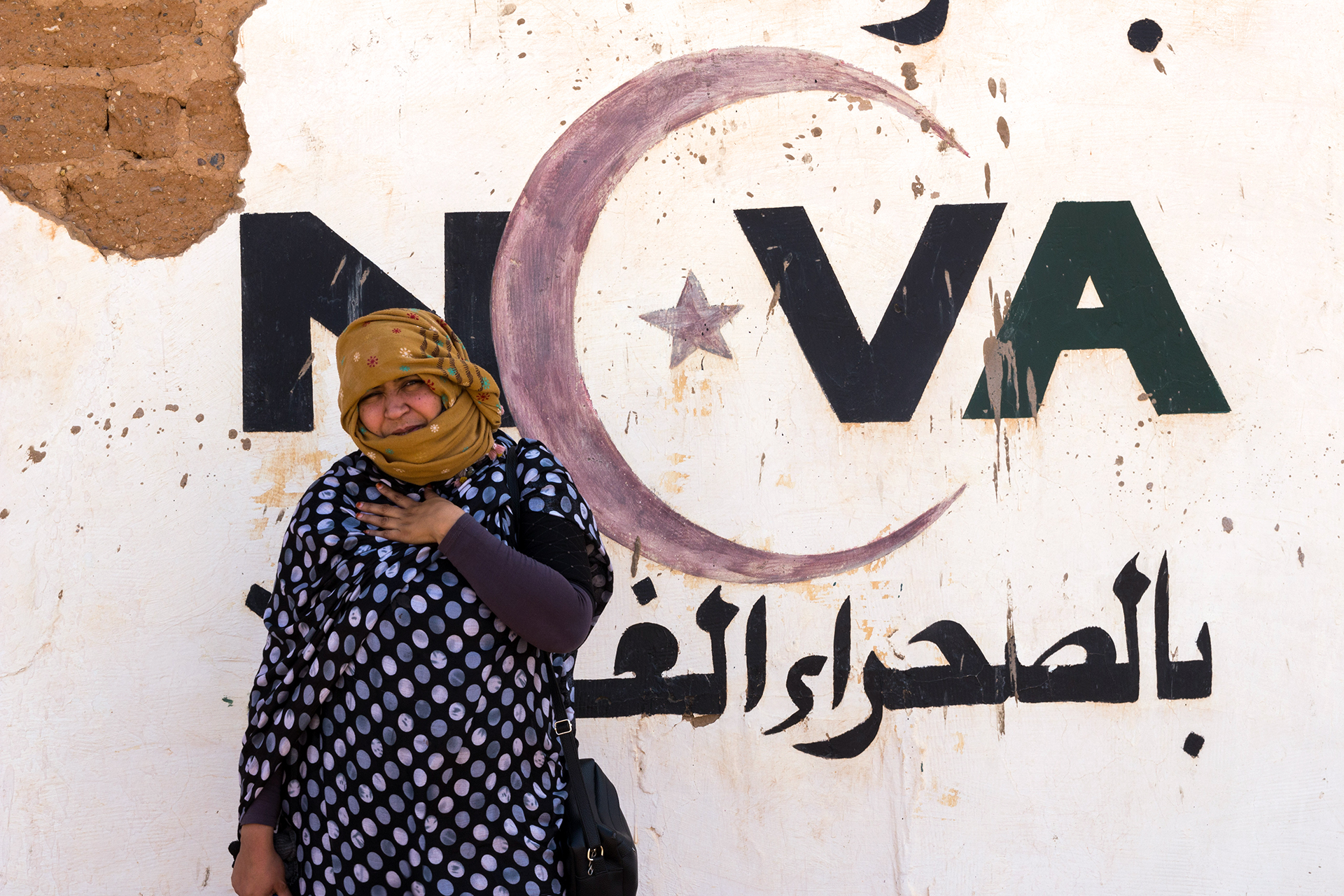 Ruairi Casey/TNH
Shaia Luali is vice president of NOVA, an NGO that promotes non-violence, part of a vibrant civil society in Tindouf that advocates for peace.

There are persistent accusations by Morocco of violence of another sort: the country says so-called Islamic State and al-Qaeda have infiltrated the camps, but the evidence to support this is scant.

After gunmen from an al-Qaeda affiliate kidnapped three foreign aid workers from Western Sahara in 2011, the Polisario Front beefed up security in the camps and cracked down on drug trafficking in its territory, a source of funding for extremist groups in the Sahel. Laayoune-born Adnan Abu Walid al-Sahrawi, who allegedly received military training with the Polisario Front, has gained prominence leading an IS-affiliate in Mali.

"A lot of people in the world, they just pay lip service to peace, human rights, and international law, but they act to prolong our suffering, prolong the conflict.”

All this leaves young Sahrawis increasingly angry, not only with Morocco but also its economic and political allies - like the European Union. The European parliament approved a trade deal with Morocco in February that included Western Saharan waters, contravening a ruling of the European Court of Justice that such a deal requires Sahrawi approval.

“We are aware that a lot of people in the world, they just pay lip service to peace, human rights, and international law, but they act to prolong our suffering, prolong the conflict,” says Darek Abdelfatah Ubbi, a member of the Organisation of Sahrawi Young women.

Or, as Tlaimidi notes: “[We’re] like trees in the desert. No one even knows if we’re there or not.”