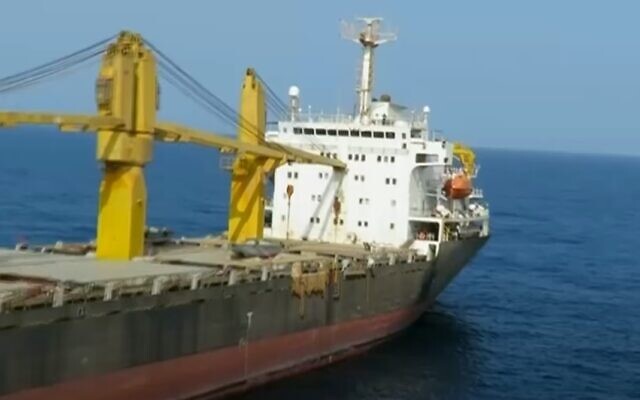 The Iranian ship 'Saviz' in the Red Sea in 2018. (Al Arabiya video screenshot)
An Iranian ship that Israel and Saudi Arabia have accused of acting as a base for Islamic Revolutionary Guard Corps forces has been damaged, reportedly by a mine, in the Red Sea waters between Yemen and Eritrea.

State-owned Saudi broadcaster Al-Hadath TV reported the attack on Tuesday, citing an unnamed source calling it a “likely” Israeli operation off the coast of Eritrea. An anonymous US official later told the New York Times that Tel Aviv was behind the attack, and had informed Washington of the op early on Tuesday morning. He said the Israelis dubbed the assault “retaliation for earlier Iranian strikes on Israeli vessels.”

The vessel was identified as the Saviz, which Israel and Saudi Arabia have long accused of being a “forward base” for the IRGC in the area.

Some Israeli accounts mentioned a “torpedo” that damaged the vessel. The semi-official Iranian news agency Tasnim confirmed that there had been an attack, describing it as “[limpet] mines placed on the hull of the ship.”

The Saviz “has been stationed in the Red Sea for the past few years to support Iranian commandos who are sent to escort commercial vessels,” Tasnim reported, noting that official Tehran has not issued a statement yet.

According to the US Naval Institute, the Saviz had “barely moved” for the past three years, and is suspected of providing surveillance of maritime traffic coming through the Red Sea. This is a major shipping route from Asia and the Middle East to Europe, via the Suez Canal that was recently blocked by the stuck container ship Ever Given.

Many world navies have maintained a presence in the area, as it has been one of the favorite hunting grounds for pirates operating from the anarchy-stricken parts of Somalia.

Tuesday’s incident comes as Iranian diplomats met with Russian, Chinese, German, French and British envoys in Vienna to discuss the fate of the 2015 nuclear deal. The US was absent from the meeting, even though the Biden administration has hinted at rejoining the deal the Trump administration unilaterally repudiated in 2018.

The alleged attack on the Saviz also comes amid a “shadow war” on the high seas between Israel and Iran over the past several years that has ramped up in recent months. The Iranian cargo vessel Shahr-e Kord was damaged in the Mediterranean in mid-March. Israel said that the freighter Lori, sailing from Tanzania to India, was struck by a missile in the Arabian sea two weeks ago. In late February, the Israeli-owned vessel Helios Ray suffered an explosion in the Gulf of Oman. Both Tehran and Tel Aviv have accused each other of the attacks, and denied any responsibility for them.

An investigation by the liberal Israeli newspaper Haaretz in March claimed that Israel and Iran have been involved in “economic warfare” for the past two and a half years, with Tel Aviv inflicting “billions of dollars” in damage on Tehran by attacking “several dozen” oil tankers.