Scare in Giro: Tesfatsion leads in course, but completely misses the bend in descent

Scare in Giro: Tesfatsion leads in course, but completely misses the bend in descent 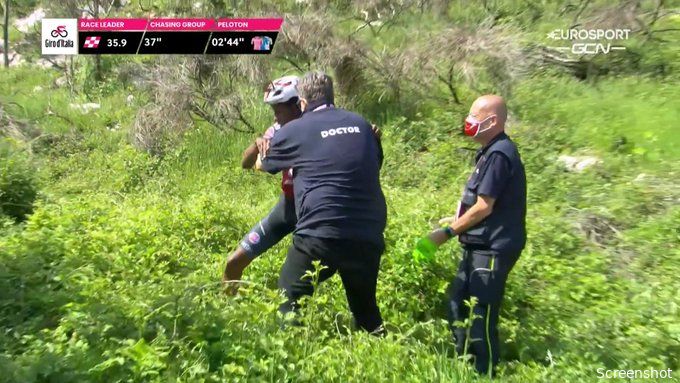 Quite a shock in the descent towards the Blockhaus in the ninth stage of the Giro d'Italia : Natnael Tesfatsion was in the lead in the race, but flew completely out of the corner. The Eritrean seems to be unscathed for the time being.

Tesfatsion was part of a leading group of nine and had escaped with Diego Rosa on the penultimate climb of the day. In the descent of the Passo Lanciano, the rider took more risks than his competitor, but missed a corner. He flew over the guardrails and ended up in the woods, after which he was fortunately able to stand up.

Due to the crash, Tesfatsion obviously lost his good position in the race. What exactly he got from the crash is unknown at this time.
--
MOMENT NATNAEL TESFATSION FLIES OFF ROAD AT HIGH SPEED AT GIRO D’ITALIA
Fortunately, Natnael Tesfatsion appeared largely unscathed despite flying off the road at the Giro d’Italia. The 22-year-old returned to join Sunday’s five-star mountain stage, where he was in pursuit of a win from the breakaway before being upended after misjudging a corner. Sunday’s stage was also predicted to produce belated fireworks in the GC battle on the fearsome Blockhaus.
Tesfatsion crash: Terrifying moment Eritrean flies off road and into bushes
00:01:29