Egypt and Sudan mobilize Arab support in anticipation of reinternationalizing the GERD issue at the UN Security Council. 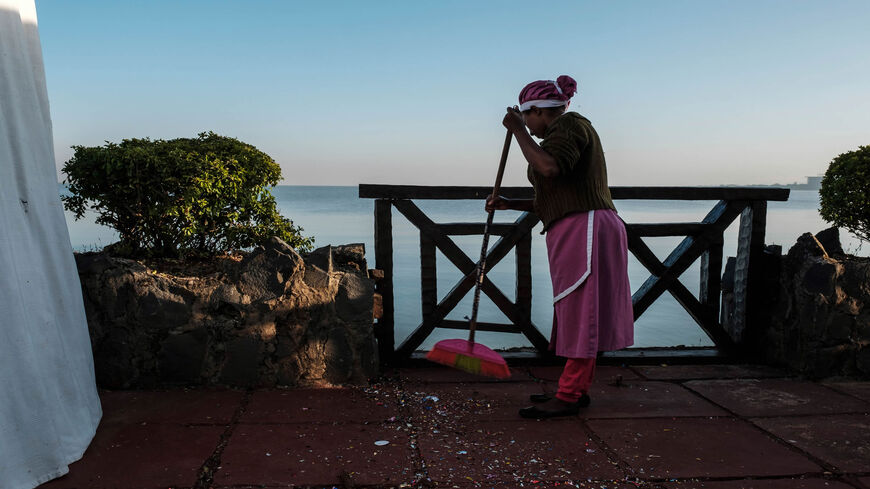 CAIRO — The Arab foreign ministers held an extraordinary meeting June 15 and called on the United Nations Security Council to convene an urgent meeting to discuss the dispute over the Grand Ethiopian Renaissance Dam (GERD), while expressing concern about the stalled negotiations currently sponsored by the African Union (AU).

Egyptian and Sudanese diplomats and experts told Al-Monitor that this was the first time that Arabs took a stand to pressure Ethiopia in the GERD issue, in anticipation of internationalizing it once again at the Security Council.

Prior to the Arab foreign ministers’ meeting, Cairo and Khartoum had addressed letters to the Security Council to explain the developments in the GERD file, and to object to Ethiopia’s intentions to move forward with the second filling of the dam’s reservoir without reaching an agreement on the GERD’s filling and operation with the two downstream countries.

The meeting held in the Qatari capital, Doha, in the presence of 17 Arab foreign ministers, discussed the GERD issue after negotiations with Ethiopia reached a dead end in the last round of talks held in Kinshasa, Democratic Republic of the Congo, on April 4-5.

Secretary-General of the Arab League Ahmed Aboul Gheit announced during a press conference after the meeting, “Arab countries strongly support the downstream countries [Egypt and Sudan].”

However, the Ethiopian Foreign Ministry objected to the Arab League statement, and said in a statement, “The Arab League has already squandered its opportunity to play a constructive role as a result of its blatant support for the false allegations of Egypt and Sudan regarding the GERD.”

In March 2020, the Arab League adopted a draft resolution submitted by Cairo, to reject any unilateral measures by which Ethiopia proceeds in the GERD. But this time the Arab statement reflected the unity of Arab positions, according to Maged Abdel Fattah, head of the Arab League mission to the UN. “The position of Arab countries has shifted; Sudan is lined up with Egypt, and Djibouti and Somalia did not have any reservations regarding the statement, unlike the previous session in June 2020,” he told Al-Monitor.

Abdel Fattah noted that the Arab group formed to follow up on the issue — which includes Tunisia (the Arab member of the Security Council), Iraq, Saudi Arabia and Morocco as well as the General Secretariat of the Arab League — will begin to meet with members of the Security Council, namely the permanent members, to inform them of the Egyptian and Sudanese position on the GERD issue.

He added that resorting to the Security Council at this time aims to take advantage of the change that occurred within the world, with South Africa, Germany and Belgium no longer being members. These countries, he said, did not support the Egyptian position. They were replaced by Ireland, Norway and Kenya, which have more ties with the Arabs.

However, certain challenges await Cairo if the GERD issue is internationalized again at the Security Council since the developing countries should not include water and climate development issues in the Security Council’s discussions, while the AU is technically still in charge of the negotiations, Abdel Fattah explained.

“We will now have to wait and see if Cairo will cooperate with Khartoum to present a new draft resolution, or if it will adopt its previous decision submitted to the Security Council in 2020,” he noted.

Egypt and Sudan have been engaged in tough negotiations with Ethiopia over the GERD for a decade now to reach an agreement on operating and filling the dam, which Egypt considers an existential threat.

Former Egyptian Assistant Foreign Minister Mohammed Morsi told Al-Monitor that no such decision has been taken in the past at the Arab level when it comes to the GERD issue, in reference to the latest Arab League statement.

However, he noted that the impact of the statement will depend on whether or not the Arab countries, especially the Gulf states, will pressure the members of the Security Council to make sure it will convene, then come up with a resolution that meets the minimum demands of Egypt and Sudan.

“Most importantly, Gulf countries need to use their economic influence on Ethiopia to urge it to be more flexible in the GERD issue,” Morsi added.

During a press conference after the Doha meeting, Qatari Foreign Minister Mohammed bin Abdulrahman said, “The Arab League may also take gradual measures to support Egypt and Sudan in the dispute over the dam.” The next day, on June 16, the Gulf Cooperation Council countries voiced their rejection of any Ethiopian measures that affect Egypt’s and Sudan's water rights.

Rakha Ahmed Hassan, a member of the Egyptian Council for Foreign Affairs, told Al-Monitor that the Arab reactions come as part of diplomatic pressure through which Egypt and Sudan seek to push Ethiopia to negotiate seriously.

“Such actions greatly disturb Ethiopia and put it under pressure, because they serve the interests of Egypt and Sudan,” he said.

“It seems that there is an international and regional tendency to give another chance to negotiations and the mediators of the AU and the United States, while some Arab countries such as Qatar and Saudi Arabia may play a role in moving the negotiations forward,” Hassan added.

Sudanese analyst Ammar Awad told Al-Monitor that the Arab League statement reflects a unified Arab position to support Sudan and Egypt in case the GERD issue is reinternationalized at the Security Council. “The statement also has a moral aspect that shows that Arab and Arab-African peoples care about the danger threatening Sudan and Egypt,” he said.

Awad noted, “The negotiation path did not lead to a solution, and the recent efforts by the AU, United States and European Union mediators failed to bring all parties back to the negotiation table, although the date of the second filling is approaching.”

Speaking to Al-Monitor, William Davison, a researcher at the International Crisis Group, ruled out the possibility of the Security Council discussing the GERD issue. “Even if that happens, it is not clear what action the members of the council can agree on since it is a recent security issue.”

He said, “I expect diplomatic tensions [between the three countries] to increase over the second filling that Ethiopia is preparing to move forward with despite the absence of an agreement, which will be faced by opposition on Sudan’s and Egypt’s part.”

The biggest concern, according to Davison, is the issue turning into an ongoing tension such as the border dispute between Sudan and Ethiopia, which might lead to increased efforts by all parties to destabilize each other through proxy conflicts, in the absence of other options to influence Ethiopia.