NAIROBI, Kenya (AP) - New satellite images of a refugee camp in Ethiopia´s embattled Tigray region show more than 400 structures have been badly damaged in what a research group believes is the latest "intentional attack" by fighters.

The report by the U.K.-based DX Open Network nonprofit, shared with The Associated Press, says "it is likely that the fire events of 16 January are yet another episode in a series of military incursions on the camp as reported by (the United Nations refugee agency)."

The Shimelba camp is one of four that hosted 96,000 refugees from nearby Eritrea when fighting erupted in early November between Ethiopian forces and those of the defiant Tigray region. The fighting has swept through the camps and two of them, including Shimelba, remain inaccessible to aid workers. Many refugees have fled.

On Thursday, U.N. refugee chief Filippo Grandi cited recent satellite imagery of fires and other destruction at the two inaccessible camps as "concrete indications of major violations of international law."

On Sunday the U.N. refugee agency urged that it be given access to the camps.

"Until November, 8,700 refugees were registered in Shimelba. We have no information on how many refugees were still in the camp last week," U.N. refugee agency spokesman Chris Melzer said in an email. "We still have no access to the two northern camps, Shimelba and Hitsats (25,248 refugees registered in November). We demand access since the refugees are without supplies for two and a half months now and we are extremely concerned. We also saw satellite pictures and heard frightening reports. But since we don´t have access we cannot confirm them." 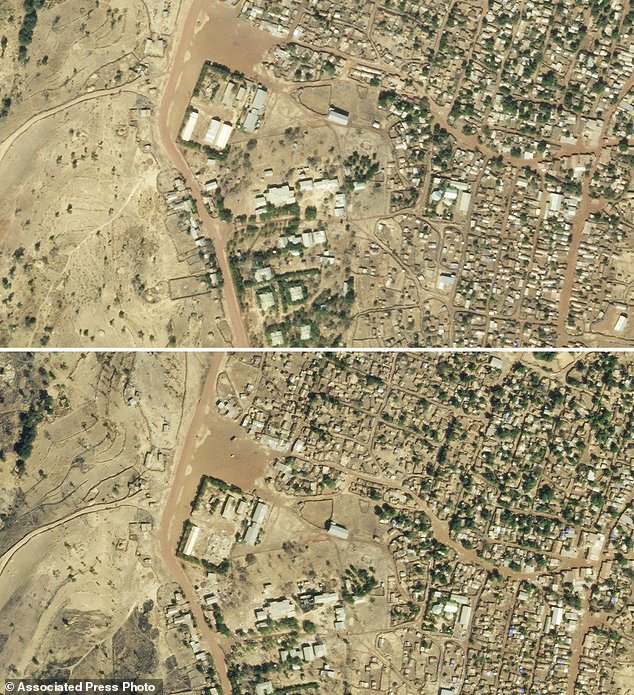 This satellite photo combo provided Sunday Jan. 17, 2021 by Planet Labs, Inc. shows the destruction of U.N. World Food Program warehouses at the Shimelba refugee camp in Ethiopia's Tigray region on Jan. 5, 2021, bottom center left, and before it was destroyed on Dec. 10, 2020, top. Starvation threatens the survivors of fighting in Tigray, and authorities say more than 4.5 million people need emergency food. Food supplies have been a target in the conflict, experts say. (2021 Planet Labs, Inc via AP)

The new report says the satellite images show "smoldering ruins, blackening of structures and collapsed roofs." The structures, it said, "match the profile of mud-brick dwellings constructed by the refugees themselves. The attackers likely split into multiple groups going door to door to set fires inside buildings," consistent with previous attacks on the Hitsats camp, which also is inaccessible.

Neither the U.N. nor DX Open Network has blamed anyone for the attacks, but the presence of troops from Eritrea, a bitter enemy of the Tigray region´s now-fugitive leaders, has caused alarm. Grandi noted "many reliable reports and firsthand accounts" of abuses including the forced return of refugees to Eritrea.

The day after Grandi´s statement, Eritrean Information Minister Yemane Gebremeskel tweeted that "UNHCR seems to indulge, yet again, in another bout of gratuitous & irresponsible smear campaigns against Eritrea." He said Eritrea rejects the "forced repatriation of `refugees.'"

Eritrea has been described by human rights groups as one of the world's most repressive countries. Thousands of people have fled the country over the years to avoid a system of military conscription.

Fighting continues in parts of the Tigray region. Thousands of people have been killed and more than 2 million displaced.