(AP): Fifty years on, the Nile dam that changed the face of Egypt 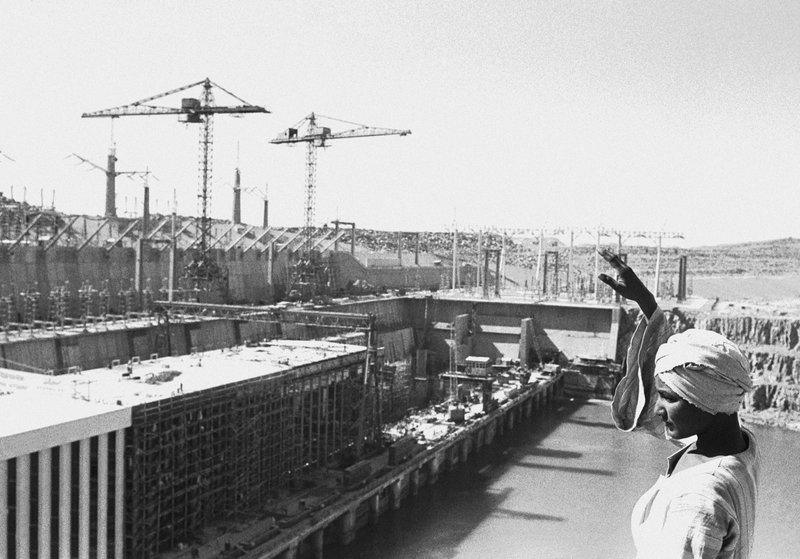 1 of 8
FILE - In this Feb. 27, 1968 file photo, an Egyptian worker waves as he stands on top of a rock overlooking the partly constructed power station on the Aswan High Dam, Egypt. Egyptians are marking 50 years since the inauguration of the Nile dam, a massive feat of construction that has shaped the course of modern-day Egypt. It spared it from seasonal droughts and flooding, and generated electricity. (AP Photo, File)
By SAMY MAGDY today
Thursday 14 Jan 2021

“Our lives were very hard,” said the 76-year-old Egyptian, recounting how his father, his brothers and other farmers had to use the traditional felucca sailboats to harvest the corn crops in the flooded fields.

The area was flooded at least a third of the year; the villagers would erect mud barriers to prevent waters from reaching their homes. Then came the dam, which officially opened after more than a decade of construction on January 15, 1971.

Built in the 1950s and 1960s under the country’s leader, the charismatic Gamal Abdel-Nasser, the Soviet Union helped in its construction after the United States and Britain withdrew financial support.

Their withdrawal was a factor in Nasser’s subsequent decision to nationalize the Suez Canal, taking it from British and French companies. He planned to use canal revenues to finance the dam. Egyptians hailed it as the moment when their country finally threw off decades of imperialist control, and Nasser was called a patriot.

The move angered France and Britain. They, along with Israel, invaded and briefly took the canal in the 1956 Mideast war. But the United States and the Soviet Union ordered them to pull back, in what was seen across the Arab world as a defining victory for Nasser and Arab nationalism.

The dam’s construction changed the very landscape of Egypt. It spared the farmers from seasonal droughts and flooding, and generated electricity, spurring Egypt’s rapid development. For years, the dam served as the main source of power for the country, which has recently needed to invest in other sources to meet the needs of its booming population.

“It is the greatest Egyptian project since the time of the pharaohs,” said Abbas Sharaky, a water resources professor at Cairo University, describing how the Nile was tamed.

The river is formed by its two tributaries, the Blue Nile, originating from Lake Tana in Ethiopia and the White Nile, from Lake Victoria in Uganda. The tributaries meet in central Sudan from where the Nile winds northward through Egypt and flows into the Mediterranean Sea.

The project ensured an adequate water supply all year, Sharaky said. In the 1980s, a prolonged drought dropped the Nile to its lowest level since 1913 south of the dam, and upstream countries faced drought and famine. But Egypt was spared. Lake Nasser, created by the dam, provided an alternate source of water.

Today, as Egypt marks 50 years of the Aswan Dam, it is embroiled in stormy negotiations with Sudan and Ethiopia to resolve a long-running dispute over another massive dam, one that Ethiopia is building on the Blue Nile, the main tributary of the Nile.

Ethiopia hopes its dam, now more than three-quarters complete, will generate electricity critical to help pull millions of its people out of poverty. Egypt, which relies almost entirely on the Nile to supply water for agriculture and its 100 million-strong population, fears a devastating impact if the Ethiopian dam is operated without taking its needs into account.

Despite the numerous benefits it brought, the Aswan High Dam also had negative side-effects. It increased the salt content of the soil used to grow food, holding back the rich silt that acted as a fertilizer, and drove thousands of villagers from their Nile Valley homes.

Some 50,000 Nubian people were subjected to forced resettlement in 1963 and 1964, to vacate the area where Lake Nasser, which covers 2,000 square miles, was created.

The world paid little attention to the displacement of the Nubians, who were moved to 44 new villages north of Aswan, but many still dream of returning to land along the lake, near their original homes.

There was, however, international uproar over antiquities dating back to the times of the pharaohs that were endangered by the dam’s encroaching reservoir. In 1960, the UNESCO issued an international appeal to save the temples of Abu Simbel, one of the country’s most popular tourist attractions and a priceless treasure from antiquity. More than 113 countries responded with funds or expertise at the time.

The temples were moved piece by piece to higher ground — an unprecedented engineering achievement, remembered as a turning point that made the preservation of cultural treasures a responsibility that cut across borders.

“Of course, there were damages,” Sharaky, the university professor, said of the Aswan dam’s construction. “But the benefits have been incomparable.”