NYTimes.com: They Once Ruled Ethiopia. Now They Are Fighting Its Government.

Prime Minister Abiy Ahmed’s two-year feud with the rebellious ruling party of the Tigray region has exploded into a war, with bombings, massacres and ethnic divisions, that threatens to upend the entire Horn of Africa.

By Declan Walsh and Simon Marks

NAIROBI, Kenya — When it comes to mountain warfare, the people of Tigray — an ancient kingdom in the far north of Ethiopia, spread across jagged peaks and lush farmland — have decades of hard-won experience.

Tigrayan fighters led a brutal war through the 1970s and ’80s against a hated Marxist dictator of Ethiopia, whom they eventually toppled in 1991, becoming national heroes. For most of the next three decades, Tigrayans ruled Ethiopia.

But after Abiy Ahmed, a peace-talking young reformer, came to power as prime minister in 2018, he brusquely sidelined Tigray’s leaders. Tensions exploded violently on Nov. 4, as the world was focused on the presidential election in the United States, when Mr. Abiy launched military strikes in Tigray.

Now Tigray is once again at war, fighting the federal government. But this time the risks could be even wider: the potential fracturing of Ethiopia and the upending of the entire Horn of Africa.

The battle pits the nation’s army and Mr. Abiy, an internationally feted winner of the Nobel Peace Prize, against the ruling party of Tigray, which commands a large force of well-armed and experienced fighters who know their own mountain terrain well. Already the conflict has escalated at alarming speed with intense fighting that has involved airstrikes and artillery barrages, sent thousands of civilians fleeing across borders — some in boats or even swimming — and led to reports of civilian massacres.

With such intransigent foes, analysts predict a potentially long and bloody fight that is already spilling over Ethiopia’s borders. 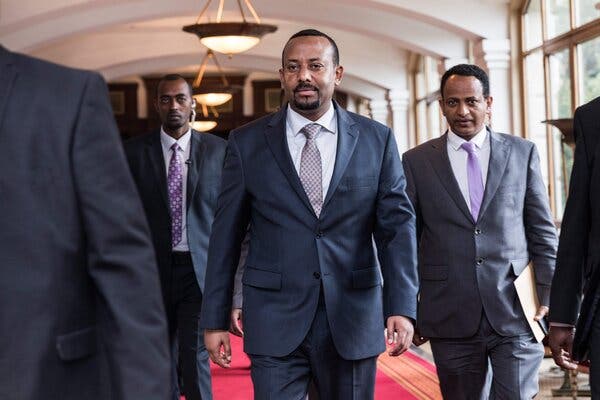 On Friday, Tigray launched rockets at two airports in neighboring Amhara Province and on Saturday said it had fired a volley of rockets at the main airport in Ethiopia’s neighbor Eritrea, which Tigray accuses of siding with Mr. Abiy.

The rush to war has exacerbated ethnic divisions so badly that on Friday it prompted warnings of potential ethnic cleansing and even genocide.

“The risk of atrocity crimes in Ethiopia remains high,” said Pramila Patten, the United Nations’ acting special adviser for the prevention of genocide, and Karen Smith, the special adviser on protecting civilians, in a joint statement.

Until recently Ethiopia, a close American military ally, was seen as the strategic linchpin of the volatile Horn of Africa. But with its brewing civil war spilling into Eritrea, refugees streaming into Sudan and Ethiopia’s peacekeeping mission to Somalia now under strain because of its domestic turmoil, analysts worry that Ethiopia could destabilize the region.

The dispute between Mr. Abiy and the Tigrayans goes back to the early days of his term as prime minister two years ago.

He moved quickly to shake up the country after decades of stultifying, iron-fisted rule under the Tigray People’s Liberation Front. Political prisoners were freed from secret prisons, exiled dissidents were welcomed home and Mr. Abiy promised free elections and press freedom.

Those rapid, wide-ranging reforms, which eventually helped Mr. Abiy win the Nobel Peace Prize, were a pointed repudiation of the Tigrayan old guard. Leaders of the Tigray People’s Liberation Front were unceremoniously sidelined and, in some cases, prosecuted for corruption and human rights abuses.

Resentful and angry, the Tigrayan leaders retreated to Mekelle, the regional capital of Tigray. The two sides sparred over politics, funding and control of the army. Then in September the Tigrayans openly defied Mr. Abiy and proceeded with regional elections that had been canceled in the rest of Ethiopia because of the pandemic.

But that clash, ostensibly a dispute between Ethiopian elites, was also emblematic of a much wider threat to Mr. Abiy’s authority.

Although Ethiopia is one country, it contains 10 regions, many of them ethnic strongholds that have historically jostled for power. In moving so quickly to liberalize politics in 2018, Mr. Abiy may have inadvertently unleashed pent-up regional frustrations that had been simmering for decades.

Rivalries among ethnic groups like the Oromo, Amhara, Tigray and Somali burst into the open, leading to violent clashes that have increased in frequency and intensity this year, often killing scores of people. With Ethiopia’s shaky federation straining badly, Tigray emerged at the vanguard of a movement pressing for greater autonomy for Ethiopia’s regions.

Mr. Abiy, who started to imprison opponents, pushed for much tighter central control.

“Everyone saw this coming,” said Kjetil Tronvoll, a scholar of Ethiopian politics at Bjorknes University College in Norway. “Both sides felt insecure and started to mobilize troops. It was a clear signal of a civil war in the making.”

Mr. Abiy’s speed in prosecuting the war has sent waves of alarm across the region and dismayed those who once lauded him as a peacemaker.

With phone and internet connections cut off, it’s hard to know exactly what is happening in Tigray. But both sides agree that government warplanes have pounded targets around Mekelle, that some Ethiopian troops were pushed over the border into Eritrea and that the most intense fighting has raged in western Tigray. By Sunday at least 20,000 Ethiopian civilians had fled into Sudan, a refugee stream that the United Nations fears could quickly become a flood. Sudan says it is preparing for up to 200,000 refugees.

There have been accusations of war crimes against both sides, including a massacre reported by Amnesty International in which dozens of villagers were said to have been chopped to death with machetes, possibly by pro-Tigray militiamen.

Mr. Abiy, who insists his dispute is with the ruling “clique” of Tigray, and not its people, has repeatedly promised a short campaign. Few experts believe that is likely. By some estimates, Tigray has 250,000 armed men, including special forces and militias. And its leaders, who have been anticipating this confrontation for more than a year, will not be easy to find.

Ethiopian officials say their immediate goal is to topple the rebellious Tigray authorities and capture their 12-person executive committee: a group of politicians, ideologues and security officials, many veterans of Tigray’s last war in the 1980s.

One major target is Getachew Assefa, a Tigrayan hard-liner and former head of Ethiopia’s intelligence service, who has been on the run since 2018, when Mr. Abiy’s government issued a warrant for his arrest.

Even in power, Mr. Getachew was notoriously had to find. A single dated photo of him is in circulation. After the American ambassador then, Donald Yamamoto, obtained a rare meeting with Mr. Getachew in 2009, he noted his “hot temper and reclusive habits” and that he was known for “eccentric behavior and elusiveness.”

Other senior Tigrayans wanted by the government include an 80-year-old ideologue, a former foreign minister and the party president, Debretsion Gebremichael, considered a political moderate until tensions with Mr. Abiy exploded this year.

That dispute did not have to end in fighting, said Asnake Kefale, an associate professor of political science at Addis Ababa University. But a purported Tigrayan attack on an Ethiopian Army base in Tigray early this month “took the division, which could have been resolved through politics, to a war, with all the adverse consequences,” he added.

In Ethiopia’s capital, Addis Ababa, the conflict has acquired signs of a broader crackdown.

The authorities have detained at least 250 people, mostly Tigrayans, and dismissed or furloughed Tigrayans from jobs in the security services, civil service, the national airline and even as officers of international organizations.

The Tigrayan head of security at the African Union, which is headquartered in Addis Ababa, lost his job after the Defense Ministry complained about him in a letter, according to a copy seen by The New York Times.

At Bole International Airport in Addis Ababa, human rights workers say, security officials have begun to ask Ethiopian passengers for their identity cards, which show ethnicity, instead of their passports, which do not.

An uneasy current of jingoism runs through the capital.

On Thursday morning hundreds of flag-waving people streamed into the national stadium, waving Ethiopian flags, to support the war effort. First in line to donate blood was the city’s mayor, Adanech Abiebie. “Our army is the pride of Ethiopia, the pride of Africa,” she said.

The rally was directed purely against the political leaders of Tigray, Ms. Adanech said. “Ordinary Tigrayans are our brothers and sisters,” she said.

But Woldegiorgis Teklay, a Tigrayan journalist whose office in Addis Ababa was raided last week, said he had since received numerous calls from Tigrayans whose relatives had been detained by the police because they speak Tigrinya, the language of Tigray.

As the conflict deepens, Mr. Abiy’s reputation as a peacemaker has been undermined, and some Ethiopians have begun to blame the Nobel Prize committee for giving him that honor.

“The Nobel Prize protected Abiy,” said Mr. Tronvoll, the academic, who called it “a shield that deflected a lot of criticism.”