“The last red line has been crossed,” Prime Minister Abiy Ahmed said, accusing the provincial government in the region, Tigray, of attacking an army base ther. 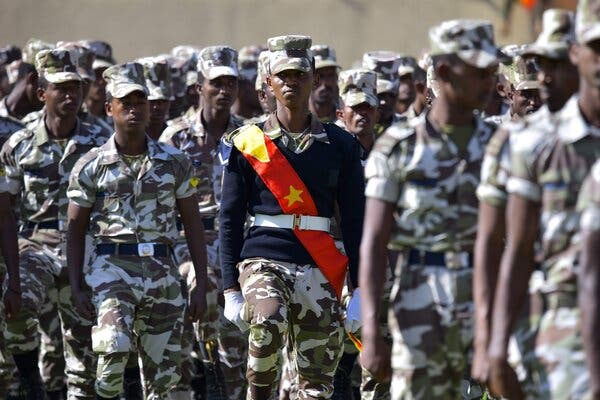 By Declan Walsh and Simon Marks

NAIROBI, Kenya — Prime Minister Abiy Ahmed of Ethiopia ordered military action against a regional government in the country’s north early Wednesday, in a major escalation of a simmering conflict that threatens to plunge the country into a new phase of turmoil.

In a statement, Mr. Abiy accused the Tigray People’s Liberation Front, the governing party in the region, of attempting to provoke a war by orchestrating a militia assault on a major Ethiopian Army base in Tigray in the early hours of Wednesday.

“The last red line has been crossed with this morning’s attacks, and the federal government is therefore forced into a military confrontation,” he said. The army had been ordered into Tigray to “carry out their mission to save the country and the region,” he added.

Hours later, a spokeswoman for Mr. Abiy said that military operations were underway though she did not specify what those operations entailed. Internet and phone links to Tigray were cut off starting at 1 a.m., or about an hour before Mr. Abiy’s statement, according to NetBlocks, an organization that tracks internet services.

The government then declared a six-month state of emergency in Tigray, giving itself sweeping powers to suspend political activity and democratic rights.

It was not immediately possible to verify that the purported attack described by Mr. Abiy, apparently with the purpose of seizing artillery and other military equipment from the army base, had indeed taken place. His statement, which said the attack had occurred that morning, was released by 2 a.m., which would make it a remarkably quick response.

Mr. Abiy’s declaration, which came as global attention was focused on the counting of ballots in the U.S. presidential election, prompted fears that Ethiopia, the second-most populous country in Africa and already shaken by violent ethnic tensions in other regions, was on the verge of a potentially disastrous internal conflict.

“Abiy has just made the worst strategic blunder of his career,” Rashid Abdi, a Horn of Africa analyst based in Kenya, said on Twitter. Any conflict over Tigray could have “devastating consequences across the entire subregion,” he added.

Tensions between Tigray and the federal government have grown steadily since September, when Tigray defied Mr. Abiy by holding elections that had been canceled in the rest of Ethiopia because of the Covid-19 pandemic.

At a news conference on Monday, Debretsion Gebremichael, the president of Tigray, warned that Mr. Abiy was planning to attack the region as punishment for that defiance.

After Mr. Abiy issued his statement on Wednesday, Tigray announced that it had closed its airspace and restricted road movement in the region, the regional television broadcaster reported. The Tigray authorities also called on Ethiopian Army generals and troops “to repudiate against dictatorship,” in an apparent call for a mutiny against the government.

The Tigray People’s Liberation Front, which started as a rebel group, has been a dominant presence in Ethiopia for decades. In 1991, it ousted the country’s longtime dictator, Mengistu Haile Mariam, and held power for the next two decades under Meles Zenawi, who came from Tigray and ruled as president and then prime minister until his death in 2012.

But the party’s influence has waned sharply under Mr. Abiy, who came to power on a reformist wave in 2018, and its leaders have made increasingly assertive claims that they were being deliberately sidelined in favor of other regions.

Tigray accounts for just 5 percent of Ethiopia’s 109 million people, but its history and wealth have lent it greater political clout than more populous regions.

Last year, the Tigray People’s Liberation Front split from Mr. Abiy’s governing coalition, then proceeded in September with elections for the regional Parliament.

Mr. Abiy’s bellicose declaration was especially striking from a leader who was awarded the Nobel Peace Prize in 2019 for making peace with Eritrea. After coming to power, he won widespread praise for trying to modernize Ethiopia by allowing new freedoms and championing an ambitious program of economic growth.

Over the summer, Mr. Abiy was embroiled in a diplomatic dispute with Egypt over a $4.6 billion hydroelectric dam that Ethiopia is building on the Nile, and which started filling in July. President Trump, who tried to mediate the dispute in the spring, speculated recently that Egypt might launch a military attack on the dam.

At home, Mr. Abiy has struggled to manage long-suppressed demands from Ethiopia’s patchwork of ethnic groups for greater autonomy from the central government. On Sunday, attackers killed at least 54 ethnic Amharas in the western Oromia region, rights groups said.

Mr. Abiy attributed that attack to a group called the Oromo Liberation Army, which he said was supported by the Tigray government. Tigray denied any role in it.

Zemelak Ayitenew, an associate professor in government studies at Addis Ababa University, said Mr. Abiy’s declaration on Wednesday was “sad but not a surprise.”

“Tigray is a heavily militarized region,” he added. “I hope everyone knows what they are doing.”