Yakob Debesay on the podium after a great team race

Yakob Debesay on the podium after a great team race 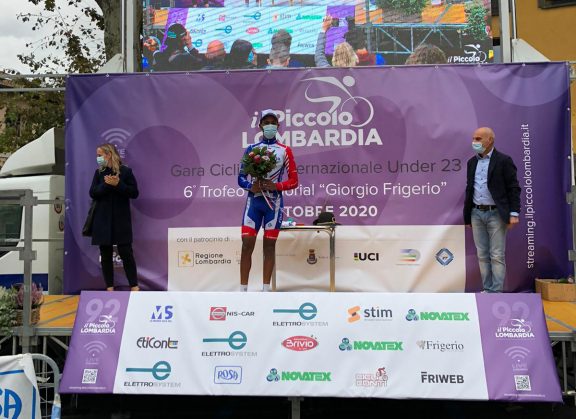 This Sunday, in transalpine lands, the “Conti” competed in the penultimate race (online) of its 2020 season. And what a race it was for Jérôme Gannat's proteges. On the “Piccolo Lombardia”, the Espoirs version of the Tour of Lombardy, the Bisontine team was both opportunistic and sparkling. This finally ended with a very nice podium for his Eritrean Yakob Debesay (3 rd ), while Sylvain Moniquet ranked fourth.

The “Conti” had a place to hold on the Piccolo Lombardia after the podium obtained by Mattia Petrucci at the end of last season. The Italian was certainly not present for this 2020 edition, but the team still lined up some good cards at the start. Sylvain Moniquet, for example, was expected to fight in the final, but the race started much earlier than expected. “It was very strange because there is movement from the first part of the event, said Jérôme Gannat.It was a bit tactical since a first group of about 20 left with Lewis [Askey]. Then a group of five came in with Yakob and the peloton was at that point at three minutes. So Jake and Sylvain attacked behind. When they came out, however, we weren't sure what to do. It still required a lot of effort to get back to the front, and if the peloton had started rolling as well, it would have been an effort for nothing. We hesitated but it went very well. Jake and Sylvain still took 35 kilometers to enter the breakaway ”.

At the halfway point, it was therefore a breakaway of around thirty men who led the proceedings. Over-represented at the front, the Conti played cards on the table. “At one point, we had to take our responsibilities because we had four riders in front, said Jérôme. We knew that Sylvain and Yakob could be present in this difficult final, so Jake and Lewis rode to the foot of the Madonna del Ghisallo to put the peloton as far as possible. They really rode on their own, with 25 guys in the wheel, but managed to increase the gap to 2'40 ”. The two climbers, Yakob Debesay and Sylvain Moniquet then entered the scene. “The selection was made from behind , continued Jérôme.At the top of the Madonna, where Yakob takes the lead in front of Sylvain, there are only nine ”. In the long descent bringing the riders back to the line, before a final loop in the neighboring reliefs, the Pole Symon Tracz (CCC) took the trunk. If he counted up to 40 seconds, he however saw the return of a quintet - including the duo de la Conti - in Colle Brianza, the penultimate difficulty of the day. “Then, it's Harry Sweeny who goes downhill , said Jérôme. It takes twenty-five seconds, it comes down to a short distance from the top of the last bump, but it digs again on the last descent ”.

The Australian Lotto-Soudal Development Team resisted until the end while Yakob Debesay and Sylvain Moniquet arrived in a group of five for second place. This went to the Danish Jacob Hindsgaul Madsen, but the Eritrean and the Belgian grabbed the third and fourth positions respectively. “Unfortunately, I got a bit stuck in the last 100 meters of the sprint and I couldn't get second place ,” said Yakob at the finish. It's a shame, but it was a very good race and the team did very well ”.   "There are a few regrets because Sylvain and Yakob were the strongest in the moguls," Jerome continued.In view of the way the race was going, I think we had two real chances of victory. Now, a race is made of climbs but also descents. It is played everywhere ” . On the podium of the race and winner of the best climber award, Yakob Debesay signed this Sunday his best performance since joining the team. "I don't think anyone would have seen him third yesterday, we were even surprised by his level today in a race of this caliber ," Jérôme conceded. Every time we went to see him in the break, he seemed very comfortable and it's a very good performance from him. This proves that he has capacities and that he knows how to seize his chance on a difficult course and with an unbridled race ”.

“Our most accomplished race this year”, Jérôme Gannat

From a more collective point of view, the sports director of the French training also showed his satisfaction: “Even though we haven't had a lot of it lately, I think it's the best race for the team for a while. We still had control over the race, we took initiatives from far away, Yakob and Sylvain ensured in the final… It's a very accomplished race. The most accomplished, by far, this year. What's more, the team performed well even though we had no certainty at the start. We had a lot of injuries, Jake was not expected, Clément was sick, Lars was coming back from a six week unavailability. We were a little in doubt as to each other's states of form, but it went very, very well. We took our responsibilities, the guys worked well and each member of the team played an important role ”.