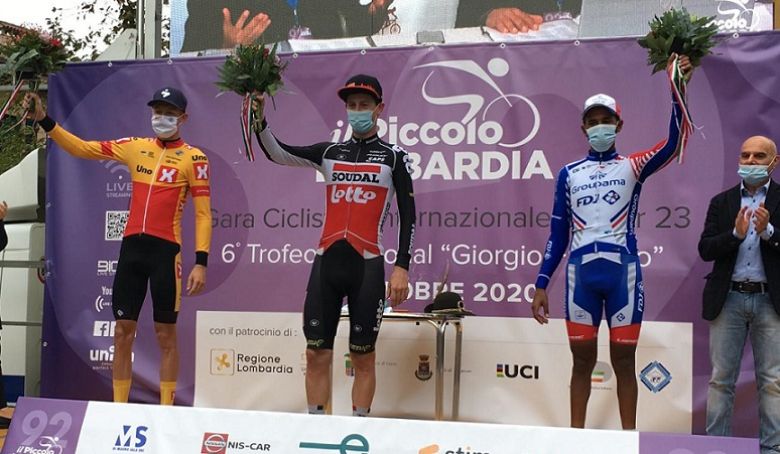 ORDER OF ARRIVAL:1. Harrison Sweeny (AUS) Lotto - Soudal U23 - km 177.7 in 4h15'38 ”average 41.708 km / h2. Jacob Hindsgaul Madsen (DEN) Uno - X Norwegian Development Team 00:233. Yakob Debesay (ERI) Groupama - FDJ Continental4. Sylvain Moniquet (BEL) Groupama - FDJ Continental
4 October 2020 - With a splendid and courageous solo action, the Australian Harrison Sweeny of the Lotto Soudal Development Team won the 92nd Il Piccolo Lombardia , classic of international cycling for the Under 23 category, racing today in Oggiono (Lecco) . The Danish Jacob Hindsgaul Madsen (Uno-X Pro Cycling Team), second, and the Eritrean Yakob Debesay (Equipe Cycliste Groupama-FDJ), third, complete the podium .
An exciting edition and a podium for the first time in history that is completely foreign and that even embraces three different continents, testifying to the prestige and the great international caliber now achieved by the event organized by the Velo Club Oggiono .
THE ROUTE
154 competitors showed up at the start. Nineteen foreign and ten Italian teams representing the best in the world of the Under 23 category. This year the course presented some news in its initial part. First three laps of a short-range circuit around the Ogionese area with three times the ascent of Sirtori who immediately imposed a selection. On the other hand, the final with the legendary climb to Ghisallo (after about 128 km) and then, in sequence, first the tear of Villa Vergano that leads to Colle Brianza, then the Marconaga di Ello unchanged .
After a series of initial attacks, the race, as expected, really lights up on the Ghisallo climb. He attacks the Eritrean Yakob Debesay who takes away a squad of 9 runners. In addition to the African rider, also his teammate Sylvain Moniquet (Equipe Groupama FDJ), Asbjorn Hellemose (Vc Mendrisio), Harrison Sweeny (Lotto Soudal Development), Matteo Carboni (Biesse Arvedi), Jacob Hindsgaul Madsen (Uno - X), Morten Hulgaard (Uno - X), Szymon Tracz (CCC Development Team) and Joab Schneiter(Swiss Racing Academy). It is Debesay who is the first to cross the hill at the Ghisallo GP. The bulk of the group is reported at 1'21 ”.
L ' ATTACK
In downhill stretches the Polish Szymon Tracz (CCC Development Team) which then passes under the Oggiono goal with 34 "lead on the first trackers. On the Villa Vergano the powerful action of the tread loses vigor and is taken up by the former escape companions. Someone loses contact, including the Italian Carboni. The group has now slipped by almost 2 minutes.
Fifteen kilometers from the finish, still downhill, the Australian Sweeny tries the solitary draw. His chronological skills allow him to immediately gain thirty seconds. It seems like a gamble, but it is instead the decisive action. Despite the efforts of his pursuers, the Australian is impregnable and flies towards the most important victory of his career.
THE WINNER
The winner Harrison Sweeny is a 22-year-old Australian "cuirassier", 186 cm by 74 kg, from Juniors, in 2016, he won the national title and that of Oceania in time trial, in 2017 and 2018 he raced for the Continental from Mitchelton Scott and lived on Lake Maggiore for two years.
Next year he will go pro with Lotto Soudal's WorldTour team. These are the words of the winner: “ It is an incredible day, without doubt the most important of my career,” said Sweeny, the third Australian to put his signature on the competition's roll of honor. “We went on the run right from the start and, when we realized that we were going to play it, I tried an extension on the descent of Colle Brianza. I still don't believe I have reached the finish line ” .