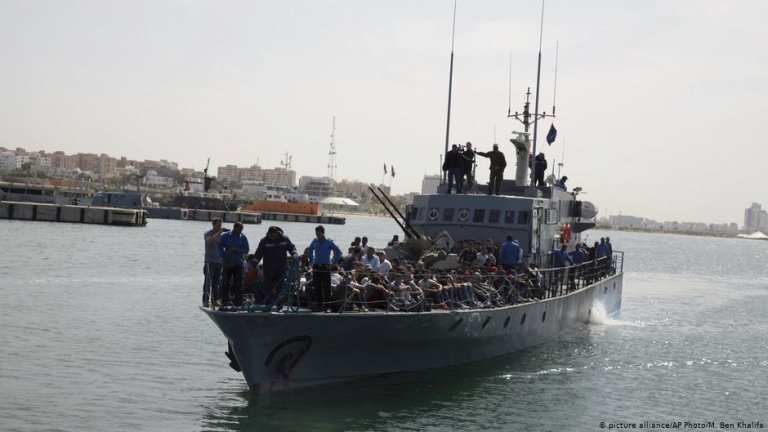 The UN migration agency (IOM) has said Libya's coast guard over the weekend returned 83 Europe-bound migrants to Libya and brought them to detention centers. Around 6,000 migrants have reportedly been intercepted and brought back to Libya this year.

The International Organization for Migration has said that Libya's coast guard on Sunday intercepted 83 migrants on a boat heading for Europe and brought them to a detention center in western Libya.

IOM spokesperson Safa Mselhi said the migrants included one woman and were mostly from Sudan and Eritrea.

After being intercepted off the coastal town of Garabouli overnight, the migrants were taken to the Souq al-Khamis detention center in the town of Khoms, around 120 kilometers east of Libya's capital Tripoli.

According to Mselhi, some 6,000 migrants have been intercepted and taken back to Libya since the beginning of the year.

IOM and fellow UN agency UNHCR, as well as rights groups have repeatedly criticized the practice of returning migrants to Libya, saying that many migrants are sent to squalid and overcrowded detention centers that lack adequate food and water.

Once there, the cycle of imprisonment, mistreatment and blackmailing begins again. In a Twitter statement from Sunday, IOM said "Libya is not a safe port, and that the detention system must be dismantled."

Even if the migrants land in official centers, many are at risk of bombardment from the fighting between the UN-backed government in Tripoli and the opposition forces of General Haftar. Others have been recruited for the fighting itself.

Earlier this year, the EU agreed to end anti-migrant smuggler operation "Sophia," which only involved surveillance aircraft after its vessels were grounded due to a migration dispute among member states last year.

The current naval mission, codenamed "Irini," was launched by the EU in April to enforce an international arms embargo against Libya with military ships.

Libya descended into chaos following the 2011 uprising that toppled and killed longtime dictator Moammar Gadhafi. During the civil war, which has been ravaging the country since 2014, turmoil in western Libya adversely affected migrants in the country.

Over the past few years, the north African nation has emerged as a major transit point for African and Arab migrants fleeing war and poverty to Europe.

Most migrants make the dangerous journey in ill-equipped and unsafe rubber boats. Earlier this year, IOM said its estimated death toll among migrants who tried to cross the Mediterranean passed the "grim milestone'' of 20,000 deaths since 2014.

In recent years, the European Union has partnered with Libya's coast guard and other Libyan forces to prevent migrants from reaching European soil.

Migrants attempting to cross the Mediterranean are regularly being picked up by the Libyan authorities and returned to Libya. Charities report their rescue ships are often out-run by Libyan coast guard vessels so that they can take the migrants back.

With material from AP