Two arrested over killing of popular political singer in Ethiopia 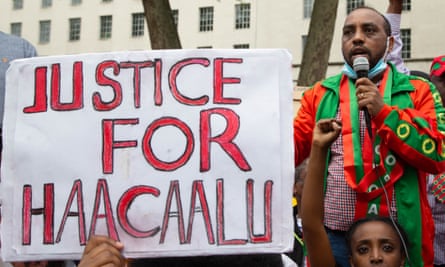 Ethiopian authorities have arrested two suspects over the killing of a popular political singer, whose death last week sparked protests in which 166 people were killed.

The shooting of Haacaaluu Hundeessaa, a musician widely revered among his Oromo ethnic group, ignited protests in Addis Ababa and the surrounding Oromiya region. The prime minister, Abiy Ahmed, described his killing as “an evil act”.

In a televised statement on Friday, the attorney general, Adanech Abebe, said the shooter was acting on the orders of an anti-government group, the Oromo Liberation Front (OLF-Shene).

The two men who were arrested included the suspected shooter and an accomplice. A third suspect was still at large, Adenech said.

“We have arrested those who killed him, and those who collaborated in the killing,” she added. “We will continue to ensure the rule of law.”

The suspects have not yet been charged. 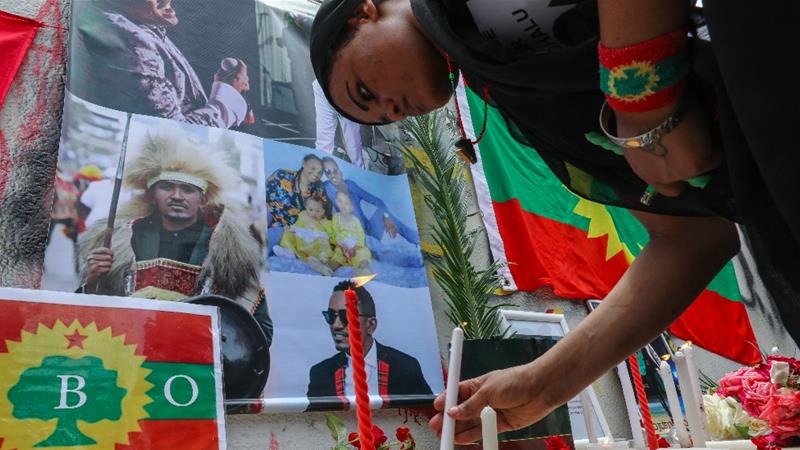 A member of the Oromo Ethiopian community in Beirut, Lebanon lights a candle to protest the death of musician and activist Hachalu Hundessa [Anwar Amro/AFP]

Haacaaluu sang in Oromo, the language of Ethiopia’s biggest ethnic group. His killing tapped into grievances fuelled by decades of government repression and what the Oromo describe as their long exclusion from political power.

Abiy, himself an Oromo, came to power in 2018 as the first modern Ethiopian leader from that ethnic group, after months of violent demonstrations led to his predecessor’s resignation.

The unrest last week was the deadliest since Abiy took office. The prime minister has initiated a broad political and economic overhaul in what has long been one of the most tightly controlled countries in Africa. He won the Nobel peace prize last year for making for his role in easing tensions with neighbouring Eritrea.

But the increased freedoms under his leadership have also been accompanied by a rise in ethnic violence, and some Oromo figures say he has not done enough to address their longstanding grievances.
-

Ethiopia arrests suspects in the killing of popular singer ...