(Agenzia DIRE) The appeal from Eritrea: "Save the Italian School of Asmara"

The appeal from Eritrea: "Save the Italian School of Asmara"

Father Vitali: "Revoke the license, the Conte government should intervene: the School has emancipated and supported generations of Eritreans"

ROME - “The closure of the Italian State School in Asmara is a danger to be avoided at all costs; for decades this institute has prepared surveyors, engineers, the ruling class of the country ": thus to the Dire Padre Vitale Vitali agency , 45 years of missions in the Horn of Africa, on a revocation of the license communicated by the Eritrean government. 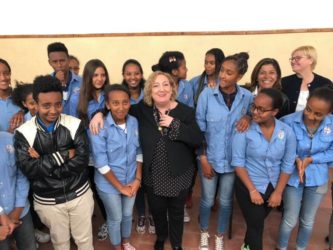 "That of the School is a fundamental experience" underlines the religious, of the Pavonians, a congregation that has been operating in Eritrea since 1969 and today remains the custodian in the capital of a reference library, with tens of thousands of texts on anthropology, linguistics, history and memory journalistic . "With its elementary, middle and high school, the institute has prepared, emancipated and supported generations of Eritreans, including future leaders and children of ministers" underlines Father Vitali. "You have to be very careful and take immediate action also because in Asmara sometimes announcements are made to evaluate the reactions they produce". For now it is difficult to understand the reasons behind the revocation notice. The decision would go hand in hand with Asmara's withdrawal from a bilateral technical agreement which provides for the establishment of a joint management body, made up of Italian and Eritrean representatives. The revocation of the license, a necessary permit for the School to continue the educational and cultural activity started in 1903, during the colonial period, has also raised the alarm of teachers and trainers . According to the professional and trade union association Anief, the decision affects "a fundamental piece of diplomatic-cultural relations" between Italy and Eritrea.

Father Vitali urges an intervention by the government of Rome , relaunching a letter to the foreign and education ministers, Luigi Di Maio and Lucia Azzolina, signed in these days by Francesco Sinopoli, general secretary of Flc CGIL. The text highlights that the Asmara institute is “historically one of the centers of excellence of the Italian school system abroad, where managers and teachers work with dedication and professionalism despite the staffing difficulties of the last few years, recently exacerbated by the situation of a pandemic that did not spare the African continent ". According to Father Vitali, a 45-year missionary in Eritrea, the last time in Asmara in November, the government of Giuseppe Conte should intervene as soon as possible in an "incisive" and decisive way ".