(Ilmessaggero.it) Murals in Milan for Destà, Eritrean child 'married' and abused by Montanelli during the colonial war 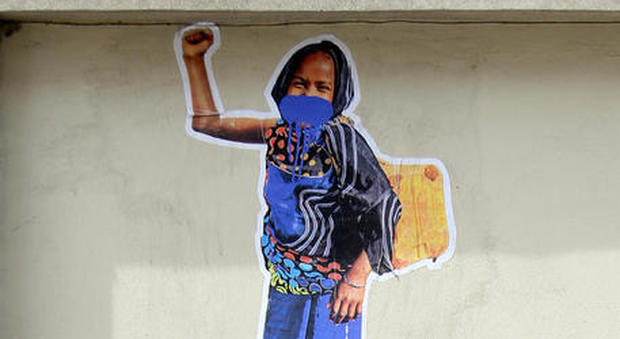 Murals in Milan for Destà, Eritrean child 'married' and abused by Montanelli during the colonial war

MIND THE GAP
Tuesday 16 June 2020 by Franca Giansoldati
Even little Destà, the 12-year-old Eritrean girl who was bought, 'married' and abused by Indro Montanelli at the time of the Italian colonial war during the Twenties has a 'monument' in Milan. It is an image that represents this bride-girl on a pedestal and that appeared on a wall in via Torino, in Milan, by the artist Ozmo. In these days the episode related to the life of the great journalist had rekindled protests culminating with buckets of red paint on the statue of Montanelli. A similar thing had happened last year, this time by the women's group #Nonunadimeno, which is fighting violence and femicide, only that time the paint that had smeared the statue was of another color: shocking pink. 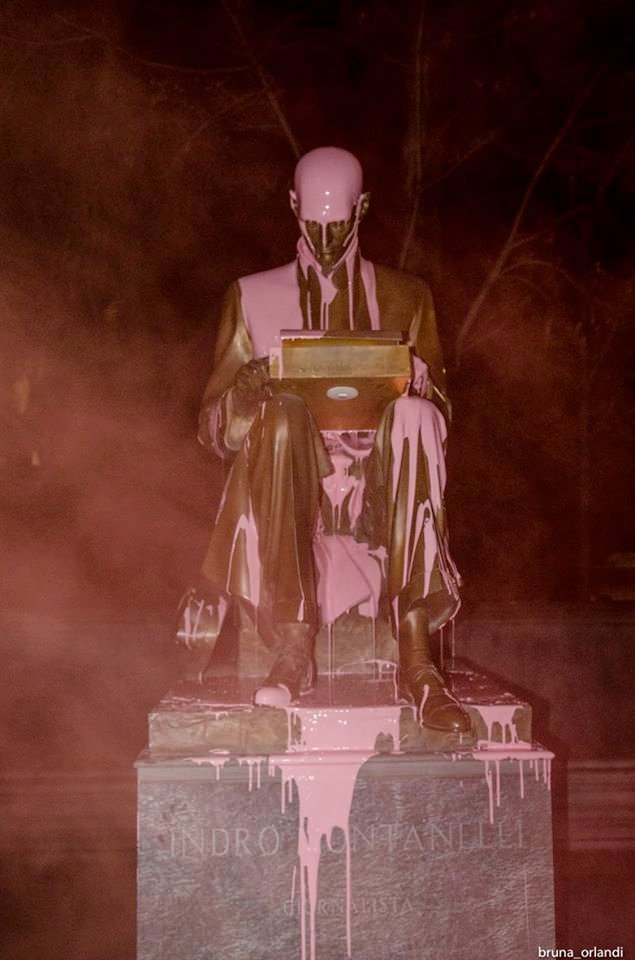 «Representing on this pedestal an African infibulated girl sold in marriage to a white soldier, victim of colonialism on several occasions, in this delicate moment of global struggles for the rights of ethnic minorities exploded after the assassination of G .Floyd, I want to restore dignity, at least in part, to the weak, marginalized, raped and robbed, "explained Ozmo, considered one of the founders of street artist practices in Italy. «Imagining her free, the protagonist, painted in a gesture of pride, is my dedication to those who, like her, find themselves on the wrong side of history - he added -. It is Desta that the 12-year-old girl Indro Montanelli married in Eritrea as a soldier now stands like a statue, thanks to the controversial practice called 'madamato',
Destà was called by Montanelli 'docile animal.
The photo on the wall of Via Torino depicts an Eritrean girl, roughly of the same age as 'Desta', dressed in bright clothes while carrying drinking water in her large yellow tank over her shoulder. "The face is covered by a color-mask stain - explained the author -. We only see the eyes, which look at us ambiguously, who will see us a smile, who a grimace of pain ». 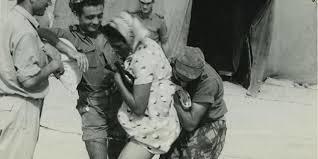 The so-called Madamato - a horrible practice tolerated by the Italian military leaders - was linked to life in the former Italian colonies during Fascism. Italian soldiers were in fact entitled to abuse Abyssinian and Libyan girls and make small concubines. He designated a relationship between an Italian soldier and a native woman of the colonized lands, called in this case madama. Initially the fascist leaders tolerated this practice which also consisted of marrying girls under the age of 10 to prevent the military from contracting venereal diseases. Only with the introduction of the fascist racial laws, the madamate was forbidden even if with poor results, despite the effort to spread tolerance houses in the colonial territories, first with Italian prostitutes. 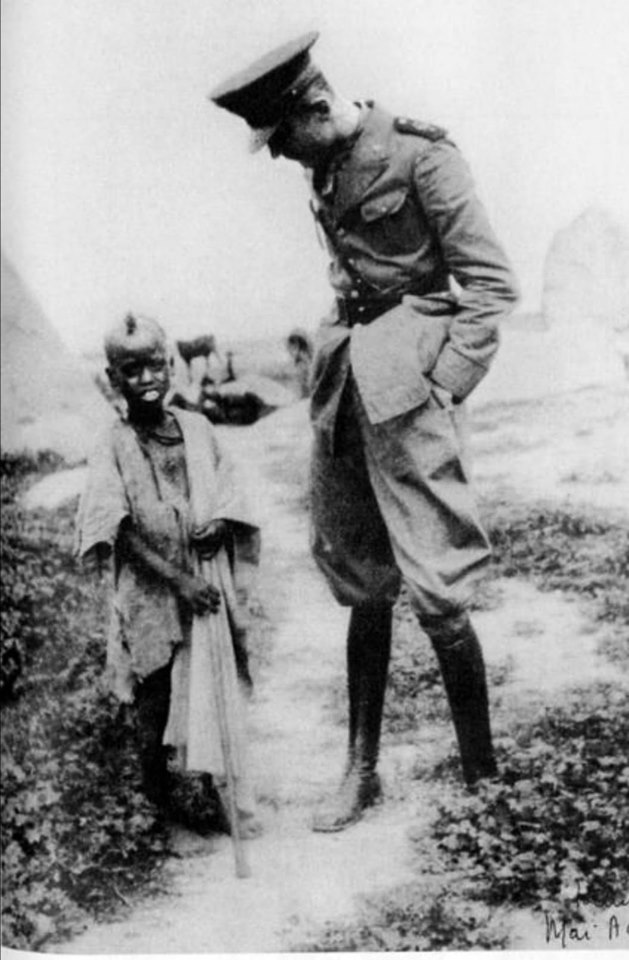 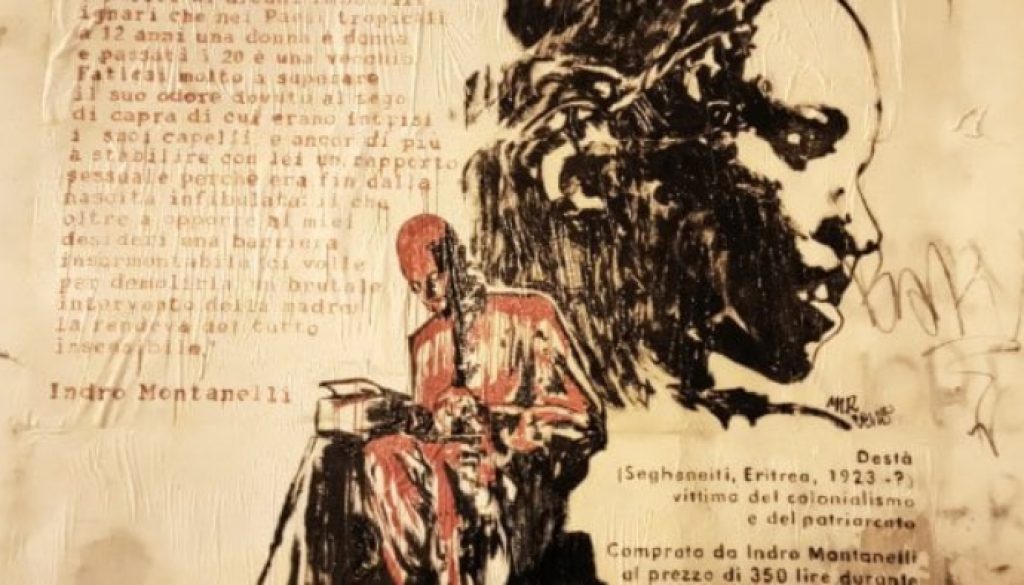 Murals in Palermo for Destà, Eritrean child 'married' and abused by Montanelli during the colonial war

In the night, in Palermo, between vicolo Valguarnera and via Cantavespri, a mural that portrays the statue of Montanelli and the face of Destà, the 12-year-old Eritrean girl whom Montanelli admitted to having " bought " and married when he was a soldier during the Abyssinian countryside.

In the mural you can read the words used by the journalist himself to tell his relationship with the little girl. " The girl was called Destà - the artists report, citing a text by Montanelli published in January 2000 on the pages of the Corriere della Sera - he was 12 years old, a detail that drew on me the fury of some ignorant imbeciles who in tropical countries at 12 years old a woman is a woman and after 20 she is an old woman. I struggled a lot to overcome her smell due to the goat tallow with which her hair was soaked, and even more to establish a sexual relationship with her because she was infibulated since birth... ". The face of Desta, represented on the right side of the mural, takes shape with a vintage photograph. Below the little information you have about her: the place, the year of birth and the price at which she was purchased in 1936.The mural, which arrives after the statue smeared in Milan, was claimed by three artists who signed Mr. Cens, Betty Macaluso and Ulrike H.The theme has returned to topicality these days, in the wake of the anti-racist demonstrations following the killing of George Floyd in the United States, and after the statue dedicated to the journalist and historian, placed at the The interior of the Public Gardens of Milan has been smeared with paint and with the writing that defines Montanelli as "racist and rapist".