Robel Fsiha has become European cross country champion in Lisbon. The Swede, born in Eritrea, shook off the tricky, hilly course of the Parque da Bela Vista Aras Kaya in the final phase of the race and claimed the win. 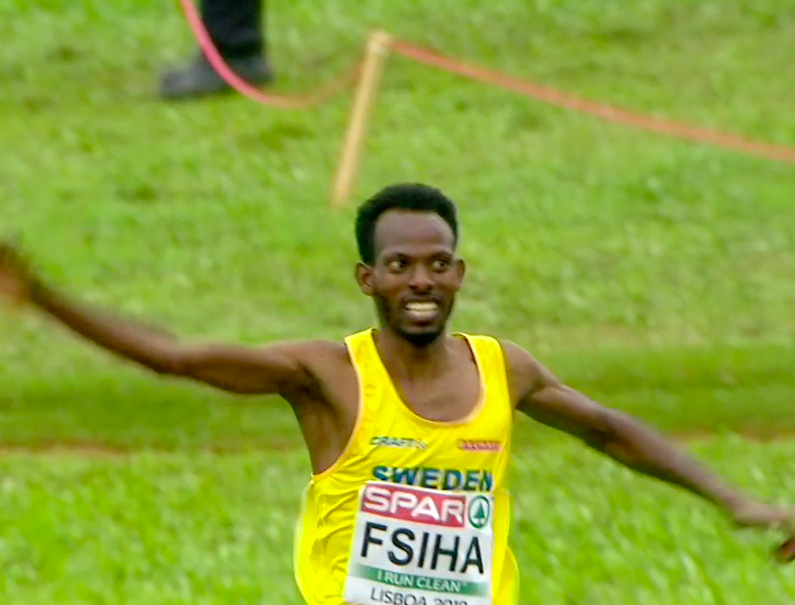 It was a day for defending champions at the European Cross Country Championships in Lisbon on Sunday (8), with five of the six individual titles retained by last year’s gold medallists.

Turkey’s Yasemin Can won her fourth successive title in the senior women’s race with commanding ease, while Sweden’s Robel Fsiha claimed glory in the senior men’s race. Anna Moller of Denmark and Jimmy Gressier again proved peerless in the U23 categories, while Norwegian wunderkind Jakob Ingebrigtsen won his fourth straight title in the U20 men’s race. The U20 women’s title was won again by Italy’s Nadia Battocletti.

On an undulating course with very little flat ground, the best track performers nonetheless shone brightest. None more so than Can, who tracked her chief rival Karoline Bjerkeli Grovdal through the first lap of the senior women’s race. But Can soon stamped her supremacy, powering clear well before the halfway mark and running alone to the finish, which she reached in 26:52, 15 seconds clear of Grovdal, who won her first silver medal at this event after four successive bronzes. “The course was hilly but I was ready for it because where I come from it is like that,” said Can.

Sweden’s Samrawit Mengsteab claimed bronze in 27:43, overtaking two-time champion Fionnuala McCormack of Ireland and edging her to the podium by two seconds. Great Britain and Northern Ireland won the team title ahead of Ireland and Portugal.

The senior men’s race seemed a wide-open affair and so it proved until the halfway point, with little to separate the leading pack. However the race for gold soon whittled down to three athletes: Aras Kaya of Turkey, Robel Fsiha of Sweden and Yemaneberhan Crippa of Italy.

Fsiha and Kaya broke clear of Crippa on the penultimate lap, and a vicious injection of pace by Fsiha on the final lap carried him to the finish in splendid isolation. He hit the line in 29:59 to come home 11 seconds clear of Kaya, with Crippa third, a further 11 seconds back.

“It was a really good field here, and I was expecting it so I prepared myself by training really hard,” said Fsiha. “My focus was to take gold. I've been working hard on my hill workouts, so I'm pleased with the result.”

Great Britain and Northern Ireland won the team title ahead of Belgium and Spain.

The widest margin of victory all day came from Danish athlete Anna Moller, who was simply superfluous in the U23 women’s race, floating up the hills like an athlete with several gears still held in reserve. She made her move slightly after halfway and hit the line in 20:30, a whopping 39 seconds clear of runner-up Jasmijn Lau of the Netherlands. Ireland’s Stephanie Cotter claimed bronze in 21:15, helping her nation to silver in the team event behind the Dutch.

“It feels amazing to win again, I love winning,” said Moller. “It's all you want to do as athlete so I'm pleased the race went the way I hoped for. I could have run in the senior race but this is my last year in U23, and I have lots of years to go as a senior runner, so I just wanted to have another go in U23 while I could.”

There was a similar sense of inevitability about the U23 men’s race, where France’s Jimmy Gressier again proved peerless. He typically saves his best for the final straight but this time around he moved early, racing clear of Serbia’s Elzan Bibic on the penultimate lap. Gressier powered across the line in 24:17 to claim his third straight title, with Bibic not far behind, crossing in 24:25. Spain’s Abdessamad Oukhelfen claimed bronze in 24:34.

“I felt great today, and I knew I had to be patient so I went for it at the right time without making it too hard for myself,” said Gressier. “I kept telling myself to be calm, to be in control. I knew my legs could do it and when I moved to the front I kept this image in my head that I could win.”

Gressier helped France to victory in the team contest with just 17 points, with Italy second and Germany third.

Norway’s Jakob Ingebrigtsen coasted to his fourth successive title in the U20 men’s race, bringing the curtain down on one of the most successful teenage careers in European athletics history.

He toyed with his opposition through the opening half and only began to turn it on with a little over a mile to run. From there he ran at a pace that was simply unfathomable for his peers, hitting the line in 18:20. His nearest pursuer, Turkey’s Ayetullah Aslanhan, was 38 seconds behind, edging Ireland’s Efrem Gidey into third by three seconds.

Great Britain and Northern Ireland won the team title ahead of Norway and Portugal.

“It looked like it was going to be a difficult race, but after the first lap you already know who's bringing it and who's not,” said Ingebrigtsen. “I'm already looking forward to racing in the future. Of course I remember my first win, it's always the first (win) I'm most proud of. After a couple of years you feel like you've been there and done it all but now I'm looking forward to not being in the junior (U20) category anymore.”

Italy’s Nadia Battocletti utilised a powerful finish to take victory in the U20 women’s race for the second successive year. She hit the line in 13:58, three seconds clear of Slovenia’s Klara Lukan, who was in turn nine seconds clear of Portugal’s Mariana Machado.

“I didn't feel much pressure coming here, I was probably more nervous at the European U20 Championships in Boras this summer,” said Battocletti. “I don't know exactly what it feels like to be the reigning champion, it was probably better the first time, but I'm very happy about this win.”

Great Britain and Northern Ireland won the team title ahead of Italy and France.

In the mixed 4x1.5km relay, Great Britain and Northern Ireland reigned supreme, their quartet of Sarah McDonald, James McMurray, Alexandra Bell and Jonny Davies clocking 17:55 to come home six seconds clear of Belarus, with France third.
Cathal Dennehy for World Athletics
World Athletics | Can retains title while Fsiha breaks through at European Cross in Lisbon| News
Can won the gold in the senior women's category in Lisbon 2019, finishing the 8-kilometre race in 26 minutes and 52 seconds. 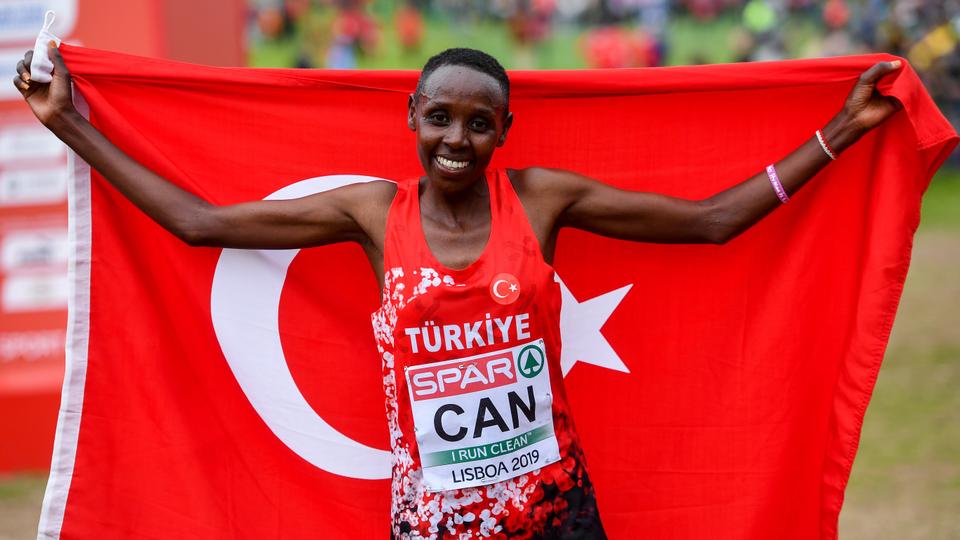 Yasemin Can of Turkey celebrates winning the Senior Women's event during the European Cross Country Championships 2019 at Bela Vista Park in Lisbon, Portugal. (Sam Barnes/Sportsfile / Getty Images)
Kenyan Yasemin Can of Turkey claimed a fourth consecutive European women's cross-country title on Sunday as fellow Kenyan-born teammate Aras Kaya was surprised by Sweden's Robel Fsiha in the men's event.
Can claimed gold ahead of Norway's Karoline Grovdal, with Eritrea-born Swede Samrawit Mengsteab rounding out the podium.
"I did good. The course was hilly but I was ready for it because where I come from it's like that," said Can.
Fsiha, also born in Eritrea, upset Kaya for the victory, with Italy's Ethiopian-born Yemaneberhan Crippa taking bronze.
Norwegian prodigy Jakob Ingebrigtsen won the fourth title in the under-20 category.
"It was a fun race," said Ingebrigtsen. "It looked like it was going to be a difficult race, but after the first lap, you already know who's bringing it and who's not.
"I'm already looking forward to racing in the future... After a couple of years, you feel like you've been there and done it all but now I'm looking forward to not being in the junior (under-20) category anymore."
Held by the European Athletic Association every December, the European Cross Country Championships made its debut in 1994 in Alnwick, northern England.
The 2020 championships will be in the Irish capital Dublin.