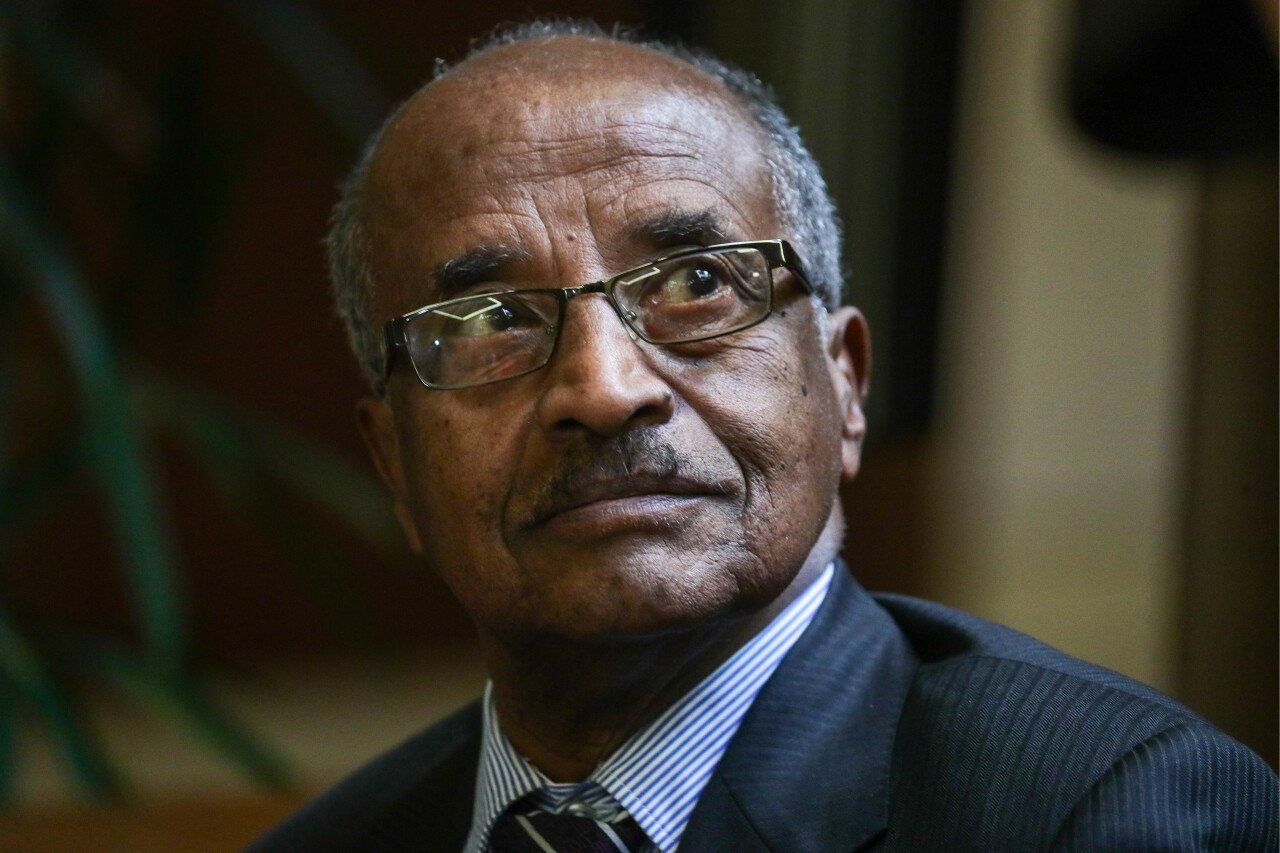 A delegation from The State of Eritrea led by Foreign Minister H.E. Mr. Mohammed Osman SALEH has arrived in Sochi to take part in the Russia–Africa Summit.
Moscow to host 40 leaders from continent in pursuit of allies and trading partners
Russia will host its first-ever Africa summit on Wednesday as the Kremlin seeks to rebuild neglected relations and goes in search of new political allies and trading partners.
A big geopolitical player in Africa during the cold war, Moscow has been vying with China, Europe and the Gulf states for influence and commercial opportunities in the resource-rich continent.
In a charm offensive in the seaside resort of Sochi, President Vladimir Putin will welcome more than 40 African leaders — including those of Kenya, Nigeria, Ghana and South Africa — as he tries to sell Russia as a longstanding and dependable partner, in contrast to the US and the former colonial European powers.
Commenting on Mr Putin’s African strategy, Irina Filatova, a professor of African history at Moscow’s Higher School of Economics, said: “Sure, Russians are foreigners, but they are different . . . There is a shared, common attitude to the west, which is that the global structure as it is today needs to be changed.”
She added: “I don’t know how much Russia can afford to spend, but it definitely comes with less baggage. Smaller sums with fewer conditions are welcomed . . . But to what extent that is sustainable is a totally different question.”
Russian exports to African countries hit $20bn last year, roughly double the level of 2015 but paltry compared with China’s $205bn, and heavily reliant on arms and grain sales to northern states. During the two-day summit, Moscow will seek trade agreements and partners for its large energy, mining and defence companies
“There is still a lot of scope for more growth. Egypt and Algeria alone account for two-thirds of Russian exports to Africa,” said Charles Robertson, global chief economist at Renaissance Capital.
“For African states, obviously any diversification of funding sources is good. Having companies compete against each other for investments is also positive. For African governments, the more people coming to mine or explore for oil, the better,” he added.
While Moscow lacks Beijing’s financial firepower, it has built influence from Algeria to Uganda by lending support to strongmen, managing natural resource projects in war-torn countries and building on longstanding defence relationships.
João Lourenço, Angola’s president, trained at a Soviet military academy in Moscow in the 1970s, while the flag of Mozambique bears a Kalashnikov rifle, the USSR’s most famous weapon. These and other cold war-era ties have already helped some Russian corporates tap into African opportunities.
Russian aluminium producer Rusal owns bauxite mines in Guinea, while Kremlin-controlled diamond miner Alrosa has assets in Angola and Botswana. State-owned oil company Rosneft has interests in Egypt and Mozambique, and nuclear energy monopoly Rosatom has 15 projects lined up in Africa, though none have received final approval. 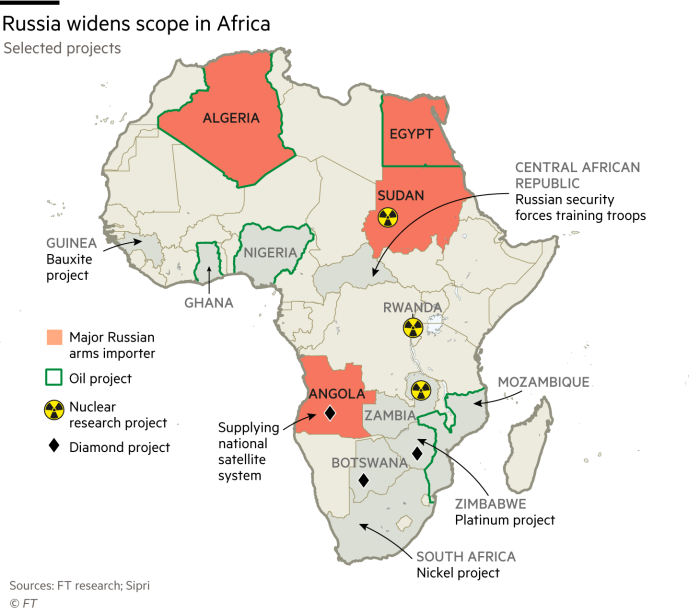 Seeking to increase that footprint and turn political friendship into business partnerships, Russia in 2017 became a shareholder of Afreximbank, a Cairo-based trade finance lender, in a step that the bank said would “take advantage of the numerous opportunities for trade and development between Russia and the African continent”.
Moscow hosted the bank’s annual general meeting in June which was opened by Russian prime minister Dmitry Medvedev. The bank is also co-organising the Sochi summit.
In west Africa, which is beset by jihadist insurgencies, Moscow has made inroads through its security apparatus and its extractive industry players.
Earlier this month, Nigeria’s ambassador to Moscow told Russian state news agency RIA that President Muhammadu Buhari hoped to sign a military training and weapons co-operation agreement at Wednesday’s summit to help the fight against the decade-long Boko Haram insurgency in the country’s restive north-east.
The war-torn Central African Republic is home to perhaps Moscow’s closest African relationship. Russian mercenaries — reportedly supplied by a company with connections to the Kremlin — guard President Faustin-Archange Touadéra, who appointed a former Russian spy as his top security adviser. Meanwhile, Russian companies have received diamond mining concessions from the government.
“A lot of relationships have been based on military areas, and now they are opening up to deals in other sectors. All sides want to re-engage from a business standpoint,” said Isaac Fokuo, founder of Botho Limited, a Nairobi-based advisory firm exploring potential Russian investments. “The sweet spots are technology, energy, power; areas where Russia is traditionally strong and African countries have particular needs.”
Yet for all the rhetoric, the Kremlin may find it difficult to repeat its feat of doubling trade with Africa over the next four years. Unlike China, which is a net importer of natural resources and exporter of finished goods, and thus a natural partner for Africa, Russia is a fellow exporter of raw products and essentially competes in the same markets.
“The question is what will they sell [to Africa],” said Mr Robertson. “There are obvious differences between what Russia can offer and what China, India or Turkey could offer, for example.”
But Dmitry Peskov, Mr Putin’s spokesman, has said that the aim of the Sochi forum is not to position Moscow as a competitor to Beijing.
“We are speaking not about competition but about mutually beneficial co-operation,” he said. “Russia has always been present in Africa; it is a very important continent.”
-
Putin: Russia ready to compete for cooperation with AfricaTASS
Putin steps up drive for clout in Africa with broadside against ...Reuters
Guns, Mercenaries, Minerals - Russia Embraces Africa | Voice ...Voice of America