TheNewYorkTimes.com: The Son Protested the Dictator. The Father Helped Throw Him Out. 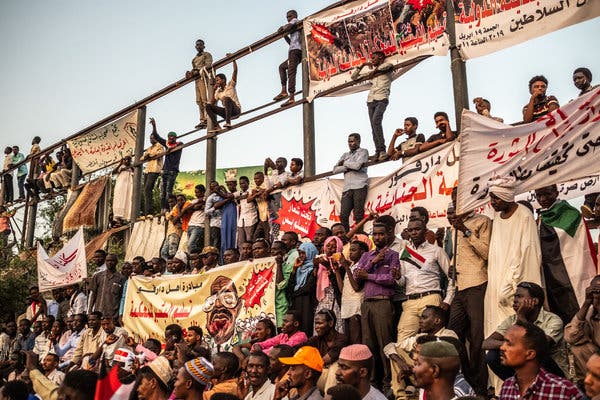 KHARTOUM, Sudan — As protesters massed at the gates of Sudan’s military headquarters, calling for the ouster of President Omar Hassan al-Bashir, the country’s Air Force chief stepped outside to address them.

Lt. Gen. Salah Abdelkhalig, a hard-bitten veteran of Sudan’s many wars, assured the protesters they had nothing to fear from the military. “This army is your army,” he recalled saying. “We are not going to fight you.”

What few in the crowd knew was that among the faces gathered in front of him was his own son.

“I had to be there,” said the son, Abdelkhalig Salah, 28, a commercial airline pilot whose frustrations with decades of decline under Mr. al-Bashir had prompted him to protest outside his father’s office. 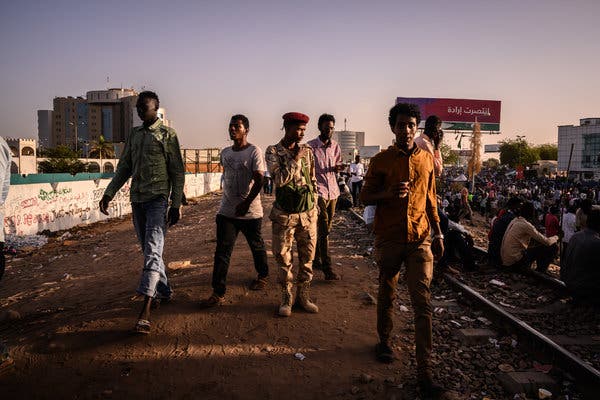 General Abdelkhalig, seated beside him on Saturday in military uniform at their richly appointed Khartoum villa, nodded. “I didn’t agree at first,” he said. ”But this is the change that young people wanted.”

The family split mirrors the broader tensions in Sudan, where civilian and military leaders are engaged in testy negotiations over the future of this vast and impoverished country. Each side is vying to take control, promising to undo the legacy of three decades of misrule under the autocratic leader, Mr. al-Bashir.

General Abdelkhalig and other senior generals ousted Mr. al-Bashir in a bloodless coup in the predawn darkness of April 11. They used jamming devices to block his cellphones, and when he realized he’d been outmaneuvered, Mr. al-Bashir was stunned and furious, General Abdelkhalig said, revealing for the first time details of how the coup was engineered.

Now General Abdelkhalig is one of Sudan’s most powerful men, part of the 10-man Military Transitional Council in charge of the country. And Mr. al-Bashir, the former president, languishes in a notorious Khartoum prison. He is under investigation for money-laundering and other financial crimes. Over the weekend, prosecutors confiscated $112 million worth of currency in a raid on Mr. al-Bashir’s home, said General Abdelkhalig.

But toppling Mr. al-Bashir may prove to be the easy part of Sudan’s revolution.

Tens of thousands of youthful protesters remain camped outside the military’s headquarters, refusing to leave until the military grants their demand for a swift transition to civilian rule. Until now, the sit-in has been an exuberant, peaceful affair, drawing vast crowds of young Sudanese who sing, dance, deliver speeches and flirt, visibly relieved that Mr. al-Bashir’s gloomy, repressive rule is over.

But talks about the country’s future between the military and the protest leaders, led by the Sudan Professionals Association, collapsed this weekend, and tensions are rising.

On Sunday night, tens of thousands of people gathered for one of the largest demonstrations yet, holding their cellphones aloft to create a sea of pinpoint lights. Protesters sat over the edge of a railway bridge, banging stones in unison to emphasize their chants. Some decried Lt. Gen. Abdel Fattah al-Burhan, the country’s interim leader, as “filthy.”

On Monday, General al-Burhan called on the protesters to abandon the checkpoints that ring the sit-in area, where volunteers in yellow vests politely search protesters for weapons. Security, he noted pointedly, is the military’s responsibility. 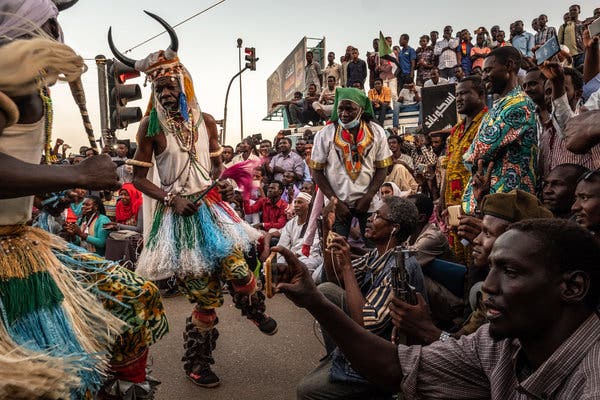 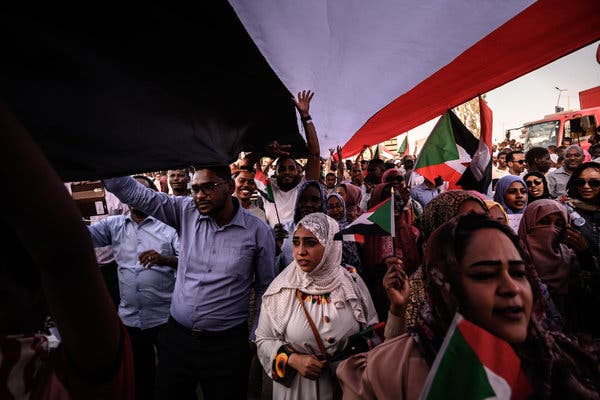 Protesters viewed the statement as another bid to undermine, and maybe end, the joyous protest that is their greatest leverage.

General Abdelkhalig, in an interview, said he supported civilian rule, eventually. But he warned of dark consequences if the protest leaders continued to press their demand for the military to immediately turn power over to civilian leaders.

“This idea will take us to civil war,” he said.

Recent events mark an abrupt change for General Abdelkhalig, not long ago a Bashir loyalist. As the protests swelled in February, Mr. al-Bashir promoted General Abdelkhalig to Air Force chief as part of an effort to shore up his crumbling authority.

A framed photo of the two men still occupies a corner spot in General Abdelkhalig’s living room. But once protesters camped at the gates of the military’s headquarters on April 6, the general started to have a change of heart.

He had already grown disillusioned with corruption, he now says, and American sanctions caused him to be refused entry into several Arab, African and European countries, which stung.

Then he lost control of his troops. When armed men loyal to Mr. al-Bashir opened fire on protesters, some Air Force soldiers deserted their posts and defended the protesters. Sporadic gun battles erupted outside the military gates.

The crowd got bigger. General Abdelkhalig got a text message from his son, Mr. Salah, to say that he had joined the protest.

The son had known Mr. al-Bashir through his father, the general.

“He made jokes with everyone,” Mr. Salah recalled. But he had grown weary of the misery and isolation that attended Mr. al-Bashir’s rule. Food prices were soaring and bank notes were in such short supply that cash machines were usually empty.

The private airline that Mr. Salah worked for struggled to get spare parts, a result of the American designation of Sudan as a state sponsor of terrorism. Last year, he applied for the Green Card lottery hoping to immigrate to the United States.

“I knew my father was inside,” he said. “But I’m Sudanese. I had to be with my people.”

At midnight on April 10, the military high command met to discuss President al-Bashir’s fate, General Abdelkhalig said. An hour later they agreed to overthrow him. Over the following hours, General Abdelkhalig briefed his junior officers about events. “You have to talk to them,” he said. “It’s very dangerous not to let them know what’s going on.”

At 5 a.m. the military changed the guard around Mr. al-Bashir’s house, and blocked his cellphones and other communications. Two officers were sent to speak to Mr. al-Bashir, who was confused and then became furious.

Outside compound gates, his son joined the protesters partying in the streets.

“We celebrated,” he said. “Even now I feel like it’s a dream. Nobody thought Bashir would move over like that.”

Since that heady moment, the military leadership has adopted a conciliatory approach to the protesters, and acceded to several of their demands. Mr. al-Bashir is being held in Kober prison, where his own enemies were often locked up and tortured.

Photos and videos circulated by the military, apparently taken at his home, show bales of hundred-dollar bills stacked on a table, and what appear be sacks of cash. Other al-Bashir aides have been placed under house arrest, like Mr. Gosh, the feared spy chief, and the former vice president, Ali Osman Taha, who once threatened to unleash “shadow” Islamist militias against the protesters.

“Some are in Kober prison, and some in other places,” said General al-Burhan in his statement on Monday.

The new leaders seem to be getting comfortable in power. General al-Burhan has started to work from Mr. al-Bashir’s old office, in the presidential palace on the banks of the Nile.

Saudi Arabia and the United Arab Emirates, which on Sunday announced a $3 billion aid package for Sudan, are backing the generals. General Abdelkhalig believes the demand for civilian rule is driven by “communists” inside the protester ranks.

“They are a minority but they have a big mouth,” he said. “These people oppose whoever is in charge.”

General Abdelkhalig’s conversion to democratic rule has hard limits. He defends Sudan’s army against accusations of human rights abuses in Darfur and the Nuba Mountains, where the air force has been accused of bombing civilians. He refuses to send Mr. al-Bashir to the International Criminal Court, where the former president faces charges of genocide and war crimes.

“You can try them here,” he said of Sudanese officials accused of such crimes. “But you cannot give them to white people to judge. Black people, we will judge them here.”

Asked what he feels about Mr. al-Bashir now, he replied with a smile, “I am happy because I am not in his place.”

He added: “I don’t know what my feeling would be if I was on the street. But I am in the palace.”