The “Crack Cocaine” of TPLF Generals 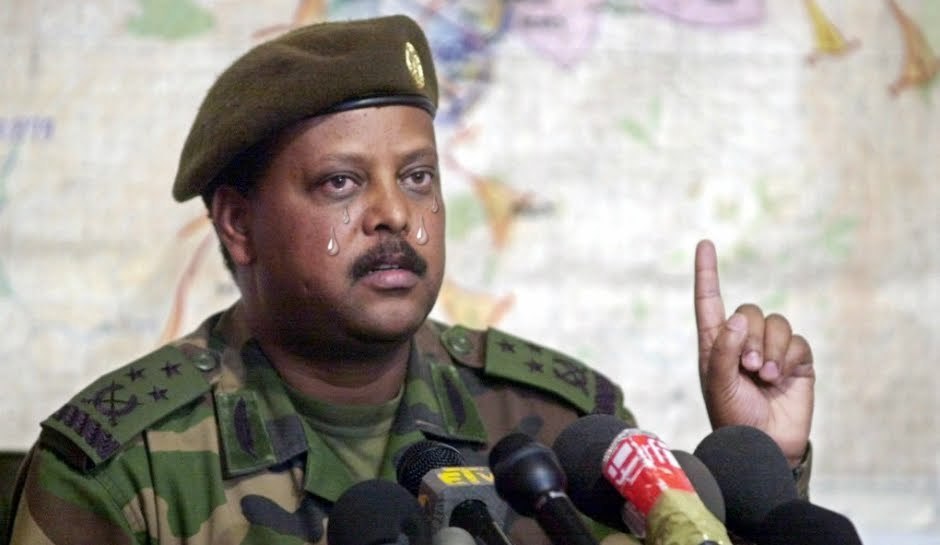 Former TPLF General Tsadkan Gebretensae aka General Cry-Baby.
Successive Ethiopian regimes have spent billions of dollars and sacrificed hundreds of thousands of their soldiers to try to control the Eritrean people by force and claim the Red Sea coastline. Despite all the blood and treasure spent on that effort, they have never succeeded in subjugating the Eritrean people. But just like a “crack cocaine” addict they can’t get off it. A “crack cocaine” addict knows the drug is bad for them, but they keep doing it anyway. The result is always the same: they lose their teeth, their fortune, the stability and well-being of their homes and families, and their sanity. They eventually end up on the street begging for food and money. They always tell themselves, “Let me just have one more hit and I will quit for good.”
The latest Ethiopian ex-official to entertain the idea of going to war with Eritrea one more time to claim the Red Sea coastline is the inept TPLF General Tsadkan Gebretensae, a.k.a “General Cry-Baby.” The same inept war leader who openly sobbed after squandering Ethiopia’s wealth in blood and treasure at the Tsorona Front. Let’s set aside the fact that Eritrea is a sovereign nation with internationally recognized borders and a member state of the United Nations for a minute. What does he think the Eritrean people are made of? They are certainly not wallflowers.
This is the same person who has been saying for years that unless Shaebia (The Government of Eritrea) is defeated, the TPLF can’t exist..
What he means by that is Tigray can’t continue its uncontrolled dominance of the Ethiopian State and its kleptomaniac ways as long as the Eritrean Government is there. Somehow the Government of Eritrea is a threat to his party’s Kleptocracy and ambition of setting-up Greater Tigray with stolen fertile land and access to the sea from its neighbors.
Ethiopia is poor but it isn’t poor because it is a landlocked country. Many landlocked countries on this earth are prosperous and affluent. There are many reasons why the Ethiopian State is poor but it is beyond the scope of this article. Ethiopia is certainly endowed with tremendous natural resources and talented human capital. It ought not to be poor. Moreover, Eritrea has never once said that it wishes to strangle the Ethiopian economy by denying it access to its ports. To the contrary, it was TPLF acting on the advice of Western “experts” that stopped utilizing Eritrea’s ports to try to pressure Eritrea’s economy into a collapse.
In 1998, TPLF and the experts advising it thought that if they started a war under the pretext of a border dispute, expelled tens of thousands of Eritreans from Ethiopia and dumped them at Eritrea’s feet in order to pressure the Eritrean economy, stopped using Eritrea’s ports in order to deny Eritrea crucial funds by diverting Ethiopia’s trade to Djibouti, cut-off Eritrea’s access to the outside world by stopping Ethiopian Airline’s flights to Asmara (really laughable) then the pressure would be too great and the Eritrean economy would collapse within six months. That was TPLF’s calculation at the time. Let’s just say TPLF’s strategists have never been accused of being geniuses.
Of all the people, TPLF’s leaders should have known about the character of the Eritrean people, for they have seen it up close. They have had a front row view to the Eritrean people’s fighting spirit, resolve, resilience, fortitude, capacity for suffering and overcoming adversity, and a generally high threshold for pain. Alas, they miscalculated and launched a war against sovereign Eritrea under the pretext of a border dispute to try to re-conquer all of Eritrea. “Crack Cocaine” has a powerful hold over its victims.
Mengistu launched several offensives (six or seven by my count) and emptied out the Ethiopian State’s treasury on the war effort in Eritrea with disastrous consequences. It led to the downfall of his government in the end. Emperor Haile Sealssie illegally annexed Eritrea and engaged in a similar destructive war before him and wiped out hundreds of villages off the Eritrean map. In the end, the Eritrean question was the major catalyst that led to his downfall. Meles tried to re-conquer sovereign Eritrea by force using the border dispute as a pretext. What he got was a debilitating split in his organization and an early send-off to his grave.
The old definition of insanity is to engage in the same things again and again and expect a different result. Now General Cry-Baby wants to try one more time. Like a “crack cocaine” addict, he wants one more hit. We can only advise it’s bad for him.
Back to Dehai News