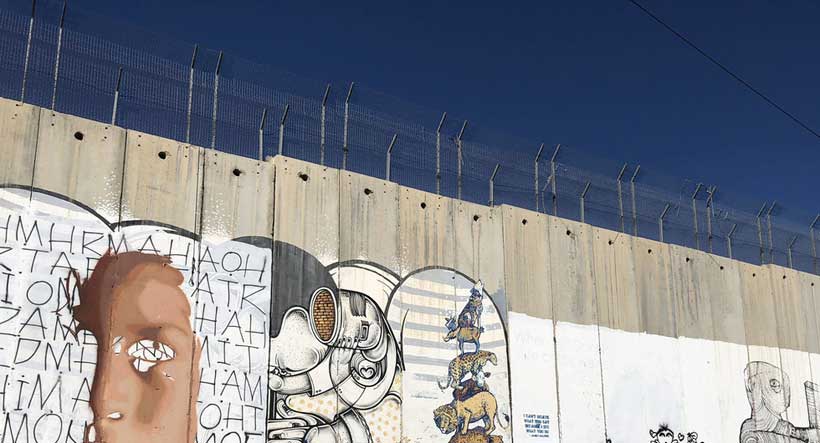 Bethlehem: part of the barrier between Israel and the West Bank. Photo: UN News/Reem Abaza

I don’t understand why the majority of Muslims have reacted so furiously on UAE’s recognition of the State of Israel. Those who are criticizing Arabs are illiterate common people, who even don’t have a slight background of the Palestinian-Israeli conflict. If we study deeply the nature of Palestinian-Israeli conflict, the very conflict began as Arab-Israeli deadlock first, when the nationalist Arabs started the first War with Israel in 1948.

Similarly, the second war between Arabs and Israel began in 1969, when Israelis set Al-Aqsa Mosque on fire. Likewise, the third war began in 1973, which is often known as Yom-Kippur war in the history books and was the major development in the conflict. Unfortunately, the beginning of 1970s was the turning point in the Israeli-Palestinian conflict during which Arabs willfully abandoned the Palestinian cause for good.

A major turning point occurred when the Late President of Egypt Anwar Sadat visited Israeli Knesset and formally recognized the state of Israel. In response, Israel returned the Sinai Peninsula and Gaza strip back to Egypt, which were lost to Israel during the Yom-e-Kippur war. Perhaps, this was the very day, when the Arab leaders began reconsidering their foreign policy approach towards Israel.

Soon after the Egypt’s recognition of Israel, the Palestinian Liberation Organization became a sandwich between the Baathist regime of Iraq and Syria. The major animosity between PLO and Arab petro-monarchies began during the second Gulf War, when the late PLO leader Yasser Arafat visited Iraq and supported Saddam Hussein’s invasion of Kuwait. Since then petro-monarchies began taking least interest in the Palestinian-Israeli conflict. Even the term Arab-Israeli conflict changed into Palestinian-Israeli conflict (please read late American President Jimmy Carter’s book “Palestine: Peace not Apartheid” to understand this analogical transformation).

Another major reason behind Arab Monarchies least interest in the Palestinian-Israeli conflict is Iran. Because, soon after the revolution, the Iranian theocratic regime has taken major interest in the Palestinian issue with metaphorical yet psychological slogan “Death to America and Death to Israel”. The Iranian regime began exporting the revolution to other countries in the region such as Iraq and Lebanon in particular. What Khomeini said on the wake of revolution during his first speech “Islam has no borders”. The message was clear, from now onwards Iran will be the champion of Palestinian cause, which has indeed infuriated Sunni Arabs. (To understand this please read Edward Said’s famous book “Covering Islam”).

Similarly, with Imam Khomeini’s declaration of himself as Vilayat-e-faqi, the Saudi Royal family declared themselves as Huremain-e-Sharifeen, which means the Custodians of two holy mosques. According to Lebanese philosopher and Political scientist Fawaz A Gerges; it was the CIA’s Idea to counter Shiite Iran in the Greater Middle East. Basically, since the revolution in Iran, the Iranian theocratic regime has used Palestinian cause as genuine platform to expand its influence across the Muslim world. (Please read Fawaz A Gerges famous book “America and Political Islam”).

Similarly, with the Iranian establishment of Hezbollah (The party of God) in Lebanon for the Palestinian cause, the situation turned worse. The Arab monarchies declared Hezbollah as Iranian proxy tool to export revolution across the Middle East rather a group fighting for the Palestinian cause. (To understand this please read Professor Noam Chomsky’s famous book “The Fateful Triangle“). Consequently, with the strange assassination of former Lebanese president Rafic Hariri in 2005, the tensions further escalated because he was close ally of Arab monarchies. The Arab leaders blamed Iranian backed Hezbollah in Lebanon for the murder of Rafic Harari.

Another major reason behind the Arabs losing interest in the Palestinian-Israeli conflict is the political and ideological presence of Hamas in Gaza, which is an offshoot of banned Muslim Brotherhood. Ideologically, Muslim Brotherhood headquartered in Egypt is a pan-Islamist party, which since its formation is struggling to establish an Islamic Empire in the Arab world by overthrowing monarchies. In this respect, Hamas as an ideological offshoot of the banned Muslim Brotherhood is threat to Arab Monarchies and hence, a major excuse for Arabs to abandon Palestinian cause.

In contrast, the recent tremendous changes in the foreign policy orientation towards Israel across the Arab world indicates the beginning of new regional peace process. As a matter fact, Israel as a nation state is a living reality, which cannot be ignored and the continuing Arab confrontation with Israel is not in the best interest of Palestinians. The recent diplomatic step taken by United Arab Emirates to normalize relationship with the state of Israel is a positive step towards new regional peace and security architecture.