TheNewYorkTimes.com: ‘It’s a Joy for Me to Bury Them’: A Quest to Honor Migrant Dead

Boubacar Wann Diallo is devoted to determining the names and origins of corpses that wash up on Morocco’s shores and to giving them a decent final resting place. 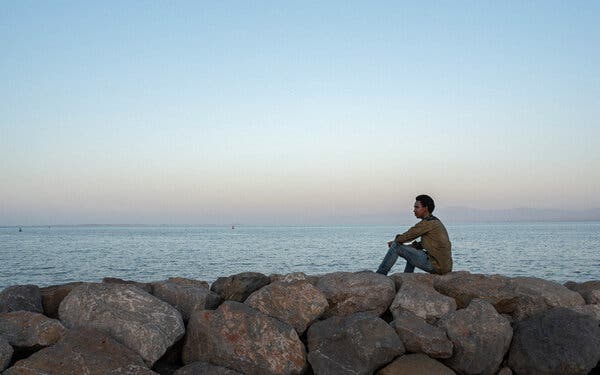 “It hurts me when people are buried without their relatives,” Boubacar Wann Diallo said.Credit...Seif Kousmate for The New York Times

NADOR, Morocco — For months, Boubacar Wann Diallo could not sleep at night without leaving a light on.

As an occasional volunteer with AlarmPhone, a hotline support group for people crossing between Morocco and Europe, he was haunted by the phone calls he received all too often from desperate women and children screaming as they were swallowed by the sea during storms and shipwrecks.

But even that, terrible as it was, was not what disturbed his sleep the most. What gave him the worst nightmares were the unidentified bodies that washed up on the beaches around Nador, a city on the Mediterranean coast in northern Morocco, which were then piled up unclaimed in the local morgue. He vowed to make it his life’s work to see that they received proper burials.

“It’s a joy for me to bury them,” Mr. Wann Diallo said recently outside the entrance to the morgue, which bears a line from the Quran: “To Allah we belong, and to him is our return.”

“I want to give closure to the families,” he said. “It makes me feel good. It hurts me when people are buried without their relatives. I put myself in their place.” 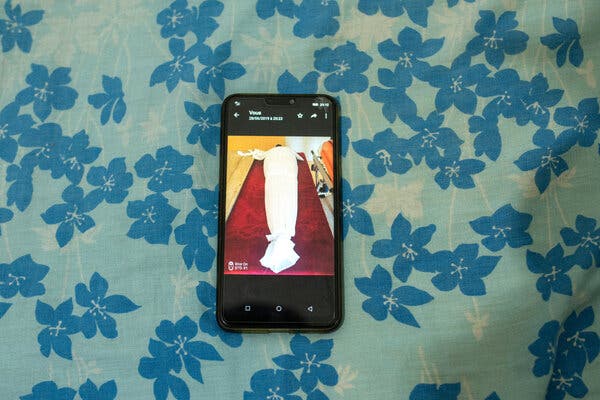 Mr. Wann Diallo’s phone with the picture of a body he identified a few months ago.Credit...Seif Kousmate for The New York Times

Mr. Wann Diallo, 32, moved from Guinea to Nador in 2013, and in the intervening years he has become one of the city’s most recognizable figures, greeted by people everywhere he goes.

As a migrant himself, he has learned to navigate the racism and discrimination against Black sub-Saharans that is routine in Morocco. He has cultivated close ties with local officials who have welcomed his assistance in identifying hundreds of unclaimed bodies.

Nador, just nine miles from the Spanish enclave of Melilla, has long been a magnet for undocumented sub-Saharan migrants, attracted by the possibility of gaining entrance to Europe by scaling a fence. In recent years, however, the European Union has given Morocco the means and financial support to cut clandestine migration, raising fences and increasing patrols at sea. As a result, successful crossings plunged by 50 percent in 2019 from the previous year. That, in turn, has forced people into taking greater chances and, in some cases, to try more dangerous crossings.

With the number of crossings down, fatalities have also dropped. But that has not lessened Mr. Wann Diallo’s determination to identify the dead, giving families news of their loved ones, however heartbreaking. “To families, there is always some doubt that the person maybe didn’t die,” he said. “It’s very hard to believe and accept that they’re dead.” 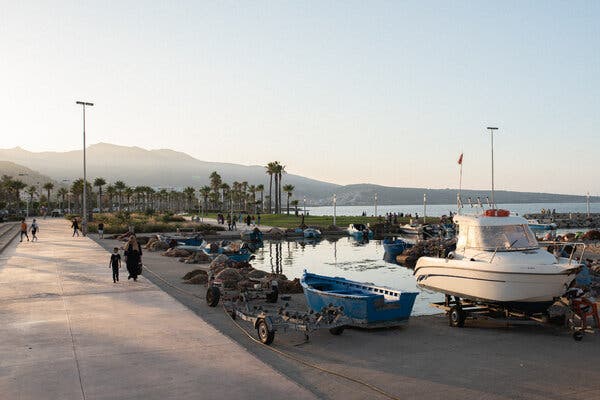 The sea front in Nador. In recent years, the European Union has given Morocco the means and financial support to cut clandestine migration.Credit...Seif Kousmate for The New York Times

Mr. Wann Diallo, the son of government workers, was born in Guéckédou in southern Guinea and grew up in the capital, Conakry. His father, now dead, was married to four women and had 25 children (seven with Mr. Wann Diallo’s mother, his fourth spouse). After earning a law degree from the Kofi Annan University of Guinea, he started a recording studio that produced artists critical of the government.

That brought him into the sights of the local security forces, and in 2013, he was forced to leave the country for his own safety.

With some savings but no definite plan, he headed for Morocco, where he had heard that he had a good chance of finding work. Starting in Casablanca, he later joined up with a fellow sub-Saharan whom he met in the Moroccan capital, Rabat, and traveled across the country, finally landing in Nador, though he says he never intended to try to get to Europe from there.

He spent a few months camping out in the forests around the city, where many sub-Saharan migrants gather before trying to move on. Alarmed by the poverty, disease and often filthy living conditions, he began trying to help them, finding work for them on farms so they could earn enough to scrape by and getting them medical attention.

“I sometimes tell myself that maybe God sent me here like a messiah to help people,” he said. “I know I am making my mother proud. People back home tell her about how I helped them.”

He became a legal resident and now works full-time as a field agent for a local organization, Asticude, that helps migrants in transit.

When he’s not accompanying migrants to the doctor, the pharmacy, to court or visiting them in jail, he is busy identifying bodies sometimes so decomposed they are unrecognizable even to their own families. 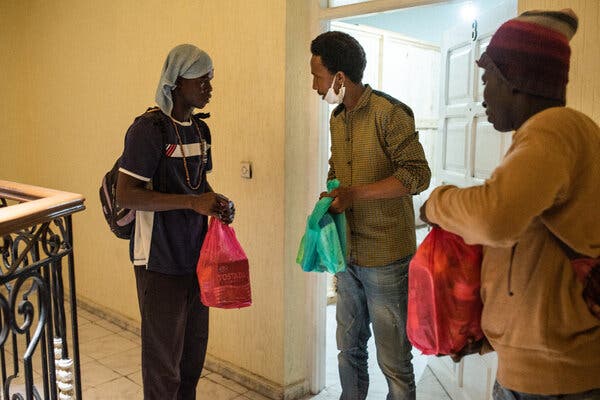 In addition to his work identifying bodies, Mr. Wann Diallo assists migrants in Nador, accompanying them to the doctor, the pharmacy, to court or visiting them in jail.Credit...Seif Kousmate for The New York Times

It is not an easy task. The first step is to seek matches between photographs families send him and the photos of corpses at the morgue. Mr. Wann Diallo seeks help from consulates and embassies, and also from migrants who knew the people who were on the same boat the day it sank but who are afraid to speak directly to the authorities.

If that fails to reveal a match, he turns to Facebook groups with dozens of photographs of migrants who have gone missing. His Facebook page is a kind of memorial to his activism, with many postings that remember the dead.

Sitting in his small room filled with motivational speaking books, a computer and audio recording equipment for a podcast he hosts on entrepreneurship, Mr. Wann Diallo pulls out one of his three phones (one for personal calls, another for professional calls and a third for social media).

Today, the social media phone contains photographs that he sent to the family of a Senegalese-Guinean man whose funeral he recently organized. The man’s body was found in the forest after an anonymous call.

The photograph shows his swollen, disfigured face and his body laid on a red sheet and wrapped in a white shroud, following Muslim tradition. The dead man’s pregnant wife did not think it was him but, after some hesitation, his mother finally concluded that it was her son.

Once he makes a positive identification, Mr. Wann Diallo asks families to grant him power of attorney to request authorization to proceed with the burial. Most families willingly comply, because few can afford the cost of repatriation. Just getting the body to Rabat costs about $1,400. Transfer to another country costs thousands more. 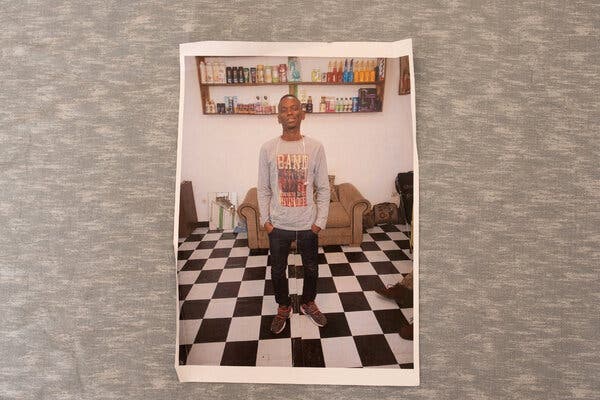 Photographs of the missing. Mr. Wann Diallo uses pictures that families send him to identify corpses at the morgue.Credit...Seif Kousmate for The New York Time 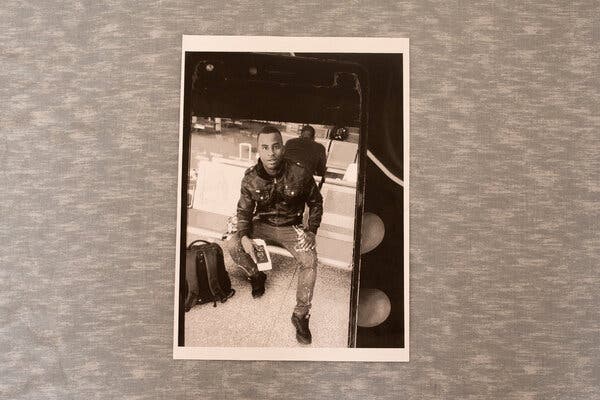 He also seeks help from consulates and embassies, and from migrants who knew the people who died.Credit...Seif Kousmate for The New York Times

The local Muslim cemetery is a desolate place, a dusty field strewn with dozens of unidentified graves. Bodies, many of them still unidentified despite Mr. Wann Diallo’s efforts, lie under mounds of rock and dirt. Small stones are inscribed with the date of burial, a number given by the authorities and the gender of the corpse. Some stones just read “body parts.”

“Once I bury, my job is over,” Mr. Wann Diallo said. “Families often tell me, ‘We don’t have to pay you anything. God will repay what you did for us.’”

Mohammed Jalleta runs a mortuary that often helps with these burials for a modest fee that is picked up sometimes by the families, but failing that by consulates or embassies, community groups and the city. He met Mr. Wann Diallo three years ago, and they have presided over dozens of burials together.

“All these people, they suffer, they drown, they were just looking for a better life and they gambled with it,” Mr. Jalleta said. “You can only feel sorry for them.” 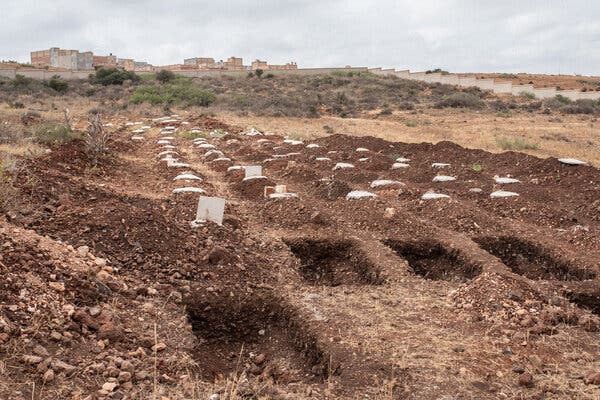 Anonymous graves in a cemetery in Nador. The stones are annotated with a reference number, date of burial and the gender of the deceased.Credit...Seif Kousmate for The New York Times

Mr. Wann Diallo is remarkable for keeping an upbeat demeanor even as he faces his grim task.

While he usually avoids getting emotional, there was one case that touched him, of a man who had left Mr. Wann Diallo’s homeland, Guinea, seeking treatment for advanced kidney disease and who died in Morocco.

“I tried the impossible for him,” Mr. Wann Diallo says. “I got him a hospital room, medical care, everything. But he came to Morocco to die.”

He still keeps a small bag with the man’s personal effects: paperwork, medicine, two passports, a driver’s license, toothpaste and a toothbrush. The family, he said, couldn’t afford to pay for the shipping.