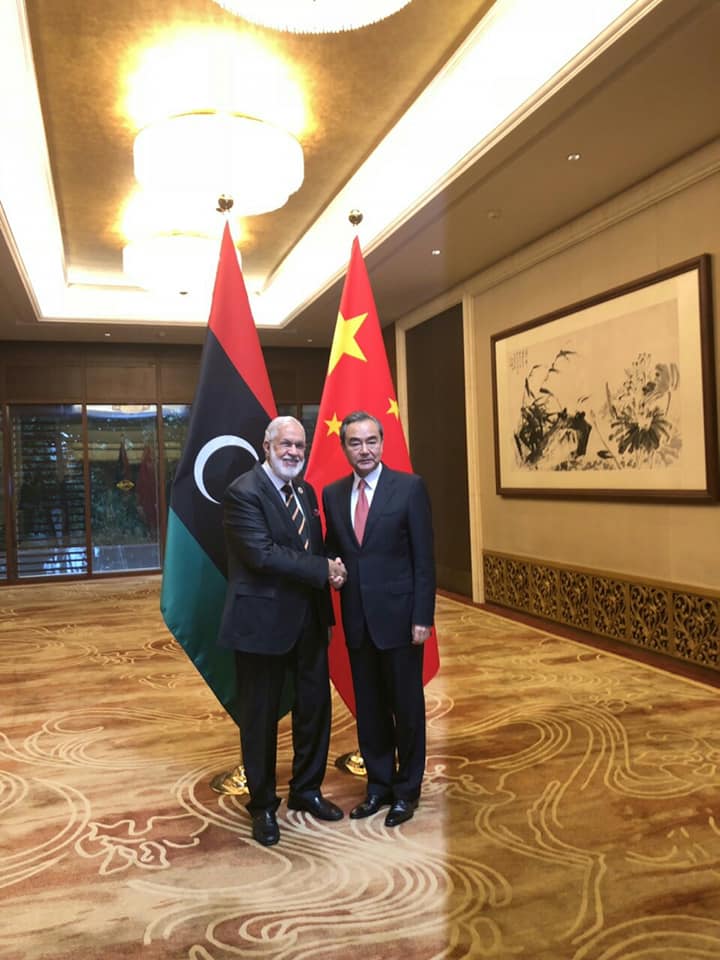 Too many analysts have overlooked China’s relevance to post-Qaddafi Libya. Perhaps this is due to most headlines coming out of Libya not directly relating to China. Nonetheless, it would be misguided to conclude that Libya is not a country of interest to Beijing, or to be dismissive of China’s long-term goals in Libya.

In contrast to their Emirati, Turkish, and Russian counterparts, China’s decisionmakers have refrained from waging direct military intervention in Libya. Rather than flexing its military muscle in Libya, China has been conducting sophisticated “behind-the-scenes diplomacy” based on “cautious and limited engagement”. [1] This approach reflects Beijing’s assessment that the Libyan crisis will end in ways which are simply unknown in the present period. Thus, the Chinese view is that it is wisest to ‘hedge’ while pragmatically avoiding excessive entanglement in Libya’s complex conflict. For now, China is content to permit other powers to fight for influence in Libya and accept the risks and costs of doing so. Beijing’s hopes lay in China’s “strategic neutrality” in Libya resulting in the resource-rich North African country moving toward the Asian power’s geo-economic orbit after Libya eventually begins its post-conflict era. In this sense, China’s strategies for advancing its interests in Libya are similar to how Beijing has approached other war-torn Arab countries with Iraq being a prime example.

Throughout the past ten years, China has constantly maintained firm positions against external interference in Libya’s internal affairs. In 2011, China opposed NATO’s military operations that overthrew Col. Muammar el-Qaddafi’s government. Yet mainly in the interest of fostering positive relations with the Arab League and African Union, China did not veto the UN Security Council resolution authorizing NATO airstrikes against Libyan regime forces. [2] Instead, Beijing choose to abstain. Nonetheless, during March 2011 China joined India and Russia in strongly condemning NATO for its “wanton use of armed force leading to more civilian casualties”. [3]

Part of Beijing’s opposition to NATO’s intervention in Libya pertained to Chinese interests in the country that were rooted in the 20th century. Despite some sources of tension and awkward moments in bilateral relations, China and Qaddafi’s Libya grew close. [4] Roughly 75 Chinese firms were doing business to the tune of nearly USD 19 billion in Libya when the “Arab Spring” erupted. [5] In 2010, Libya sourced three percent of China’s total oil consumption, approximately 150,000 barrels per day (bpd). [6] China’s major oil giants (CNOOC, Sinopec Group, CNPC, etc.) all had important projects in pre-2011 Libya. [7]

Since the Libyan leader’s ouster, Beijing has made calls for a cease-fire and political solution to the crisis with the UN playing a critical role in the process. China’s post-Qaddafi Libya foreign policy has mostly focused on exerting its economic influence and diplomatic leverage in the North African country. Nonetheless, China had difficulty pursuing its economic interests in Libya given the reality of violent instability across the country during the period between the 2011 revolution and the civil war’s eruption in May 2014. Amid those years, scores of China’s projects in Libya were frozen while Sino-Libyan trade at large dipped by at least 57 percent. [8]

The civil war breaking out did not make the picture any easier for Beijing. In 2014, when Libya bifurcated between two power centers (Tripoli and Tobruk), the North African country’s complicated conflict posed new challenges from the standpoint of Chinese interests. Nonetheless, throughout this civil war, Beijing has maintained a cautious and balanced approach to Libya’s crisis with a focus on long-term interests.

In alignment with the UN’s position, China respects the Government of National Accord (GNA) as Libya’s “legitimate” government. Since 2016, officials in Beijing have met with their GNA counterparts at least nine times. [9] In 2018, the two governments’ chief diplomats met at the Beijing Summit of the Forum on China-Africa Cooperation (FOCAC), resulting in China and the GNA signing a memorandum of understanding, which committed Beijing and Tripoli to coordinate the delivery of President Xi Jinping’s flagship Belt and Road Initiative (BRI) to the war-torn North African country. [10]

“For China, the GNA is an attractive partner, even if just for the time being,” according to Libya experts Frederic Wehrey and Sandy Alkoutami. “The GNA still controls the Central Bank of Libya, giving it the ability to deploy funds, sign contracts, and distribute capital to partners, all of which are necessary for any viable partner for Beijing.” [11] Officials in Libya’s Tripoli-based government have been grateful for China’s engagement, particularly in relation to sectors such as infrastructure and telecommunications. [12]

Yet throughout the Libyan civil war, Beijing has been careful not to burn any bridges with Haftar. China has, at least up until 2020, calculated that Haftar’s side could possibly emerge victorious. Thus, Beijing and the Tobruk-based administration have maintained a pragmatic relationship despite China recognizing officially the GNA as Libya’s legitimate government. Though in contrast to Russia and some regional powers, China’s links with Libya’s east have been solely economic. In 2016, China made commitments to fund certain development projects (a deep-water port, a commercial airport, and a railway) in eastern Libya, reflecting Beijing’s ‘hedging’ strategy. [13]

Although China has avoided direct military intervention in Libya’s civil war, General Khalifa Haftar’s self-styled Libyan National Army (LNA) has been using Chinese-made Wing Loong drones. This began in 2016, when the United Arab Emirates (UAE) began transferring them to the LNA. Although some analysts interpreted this development as a sign of Beijing shifting toward a pro-Haftar agenda in Libya, yet the eastern side’s use of these Chinese-produced drones did not signify Beijing’s abandonment of “neutrality”. Chinese officials maintain that the sale of drones to the Emiratis was for strictly commercial purposes and that Abu Dhabi’s decision to bolster the LNA’s fighting capabilities with the Wing Loong drones had nothing to do with China’s positions on Libya’s crisis. As affirmed by Wolfgang Pusztai, the former Austrian Defense Attaché to Libya who currently serves as the Chairman of the Advisory Board of the National Council on U.S.-Libya Relations, “there is no evidence that any of these weapons are delivered directly by China to the Libyan warring factions.” [14]

“Balanced Vagueness” in a Competitive Theater

China’s motivation for maintaining “balanced vagueness” has been about placing bets on Libya’s two main power centers. [15] China’s post-2014 Libya foreign policy has much in common with the Asian giant’s somewhat similar strategic “neutrality” in Yemen. In both war-torn Arab countries, the Chinese have avoided becoming too involved in the politics while Beijing has kept corridors of cooperation open with all the actors who could win the upper hand so that China can play major roles in the reconstruction and redevelopment of both Yemen and Libya regardless of how these civil wars end. Beijing has the “desire to maximize its diplomatic and economic gains no matter the conflict’s outcome” as Wehrey and Alkoutami put it. [16]

Looking ahead, China will continue pursuing its agenda in Libya that is primarily economic in nature. In 2019, China imported approximately USD 4.8 million worth of petroleum from Libya (see figure below). [17] Yet such Chinese interests in the North African country pertain not only to the energy sectors. In fact, they are mostly about (re)construction and telecommunications. Regarding Libya’s volatile political situation, Beijing is committed to continuing its flexible positions which are aimed at enabling China to achieve its economic pursuits in the Maghreb. “For China, it is irrelevant who ‘wins’ in Libya,” explained Sami Hamdi, the International Interest’s Managing Director. “Beijing believes it can easily compete with the economic packages that will be offered by Europe and the US in the rebuilding stage.” [18]

Beijing is playing a ‘wait-and-see’ game in Libya. The odds are good that China will not make any bold moves in the immediate future, allowing other powers to become bogged down in the ongoing armed conflict. While the Emiratis, Turks, and Russians are focused on the upcoming days, weeks, and months in Libya, the Chinese are patiently looking years and decades down the road. Nonetheless, as Samuel Ramani, a doctoral researcher at Oxford University, explained, Libya is not the center of Beijing’s MENA region foreign policy focus. Throughout the greater Arab world, “China's immediate investment priorities lie in Iraq in terms of post-conflict rebuilding.” [19]

In the larger geopolitical picture, China will be competing with some other powers which are scrambling to establish themselves as the most influential external actors in Libya. Turkey’s ongoing military intervention in Libya, which is geared toward boosting the GNA’s strength, appears to be fueling some friction between Beijing and Ankara despite China nominally supporting the GNA. China’s skepticism about Turkey’s recent involvement in the Libyan crisis was illustrated by commentary from Wang Jingyan, a researcher at the Chinese Academy of Social Sciences. Wang stressed that while Ankara’s support for pro-GNA forces has shifted the tide against Haftar, he viewed the Turkish intervention as provocative, driven by President Recep Tayyip Erdogan’s internal issues within Turkey, and most likely to leave Ankara in greater isolation within the eastern Mediterranean. [20] Other Chinese foreign policy analysts have assessed Turkey’s conduct in Libya in similar ways, often perceiving Ankara to be excessively ambitions in the North African country. [21] In Hamdi’s words, “The stronger Turkey is in Libya, the less China will benefit as Ankara will be keen to ease US concerns in exchange for their backing (or neutrality) in their ongoing wrestling with Russia and the UAE.” [22]

The major actor from outside the MENA region which challenges Turkey’s agenda in Libya is Russia. Nonetheless, this does not mean that China and Russia are necessarily on the same page concerning Libya. Russia has been determined to strengthen the influence of Libya’s eastern parties as the Kremlin understands that the GNA is far more aligned with NATO members (with the notable exception of France). In this sense, China shares Russia’s interests in countering western countries and Turkey’s clout in post-conflict Libya, yet Beijing has not pursued this interest through direct military intervention or outright support for Haftar in any ways. Whereas Russia’s determination to establish itself as a power broker in the Maghreb has heavily shaped Moscow’s foreign policy vis-à-vis Libya, China’s interests in the war-ravaged country are significantly different in nature. Ultimately, despite Beijing and Moscow being, at least officially, in support of Libya’s opposing sides and there being potential for greater competition to emerge between these two powers, there is hardly any reason to believe that the crisis in Libya will become a serious point of contention in Sino-Russian relations that severely harms bilateral ties.

Despite China not being a part of most discussions and analyses of Libya’s dangerous state of affairs, Beijing is an important player not only in Libya but also throughout the whole Maghreb. As shrewd decision makers, officials in Beijing have been careful to avoid conduct in Libya that could leave China on bad terms with whichever side ultimately wins the nightmarish civil war. With vested interests in promoting a stable environment irrespective of whether pro-GNA forces or the LNA triumph, China has officially recognized the GNA without decisively taking any side. The Chinese hope is that the victors of the Libyan civil war will establish Libya as a China-friendly country for the long-haul.

Beijing’s approach has much potential to pay off later. Without creating baggage in Libya—as have the Emiratis, Turks, Russians, and others—the odds are good that China will eventually emerge strongly in the North African country where its citizens are bound to see Beijing as invaluable partner in the post-conflict period. As a geographically large, oil-rich country connecting the Mediterranean Sea to sub-Saharan Africa, Beijing eyes Libya as having a role to play in China’s BRI, at least eventually.