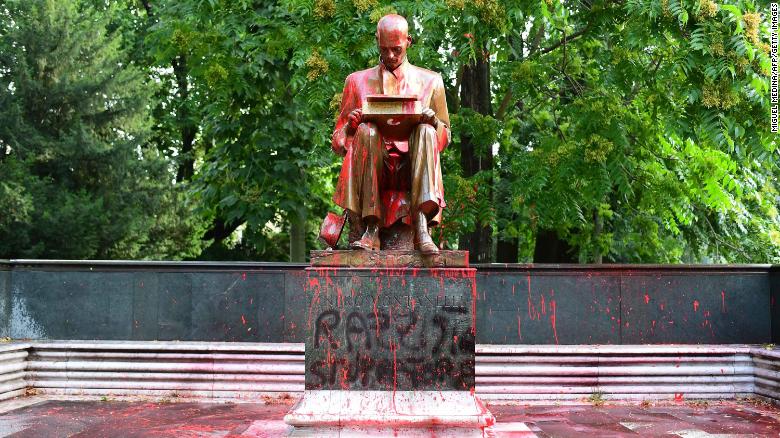 The statue of journalist Indro Montanelli was defaced, stained with red paint and tagged with the inscription "racist, rapist."

Milan (CNN)A statue of famed Italian journalist Indro Montanelli in Milan has been painted red and sprayed with the words "racist" and "rapist," while a petition has called for its removal.

While serving in the army in 1935-1936, during Italy's war in Eritrea, the 26-year-old Montanelli bought and married a 12-year-old girl.
During a 1969 interview with Italian journalist and activist Elvira Banotti, Montanelli said he was married to the child because he "bought" her, which he said was part of the region's tradition and common among Eritrean soldiers.
When Banotti pressed Montanelli on whether he had raped the girl, named Desta, the journalist did not answer the question directly but defended himself by saying that he was married and that the issue of rape was out of the question.
Montanelli also wrote about the marriage in a collection of essays published in 2000, titled "La Stanza di Montanelli."
He died in 2001.
There is now a petition to have the statue removed from the park in the city center.
Prosecutor Alberto Nobili, of Milan's prosecutors office, told CNN that his office has opened an investigation into the attack on the statue, with a possible charge of "fouling."
The penalty for such a crime ranges from a fine of €103 to €1,000 ($115-$1,125) and between three months and a year in prison, Nobili said.
Nobili added that the statue is in the process of being cleaned.
Montanelli's statue has been targeted before -- on International Women's Day in 2019, it was splashed with pink paint.
Milan's mayor, Beppe Sala, said Sunday that although he had seen the video in which Montanelli admitted he had bought the girl, he believed Montanelli was a "great journalist" who fought for press freedom, and that the statue should remain where it is.
"Now I invite all of us, I invite our community to reflect on two issues. The first question I ask myself and you is what do we ask of personalities we want to remember with a statue, with a plaque, with the name of a street or a square, or a garden? Do we ask for a spotless life? For a life in which everything was absolutely right? It is possible. However, few would remain to remember," he said in a video posted to Facebook.
"And the second question that I ask myself and you is: When we judge our lives, can we say that our own is spotless? And without things that we wouldn't do again?" he said.
"I put my hands up, my life is not. I made mistakes, I did things I wish I hadn't done, but lives must be judged in their complexity. For all these reasons, I think that the statue must remain there. I am nevertheless available to discuss the issue of racism and Montanelli whenever you want," the mayor added.
Meanwhile, Alberto Malvolti, president of the Montanelli Bassi Foundation, which conserves Montanelli's legacy, said in a statement on Thursday that the suggestion of removing the statue "would be an offense to the memory of the most popular and appreciated Italian journalist of the 20th century, as well as representing an insult to the city of Milan."
-

Statue of Italian journalist who bought and married 12-year ...Face2Face Africa
Back to Dehai News